Lesson Transcript
Instructor: Laszlo Vass
Intervertebral discs are pads of fibrocartilage located between the 33 vertebrae in humans and serve a set of functions, including protecting the vertebrae and nerves in the spine. Learn more about the functions of intervertebral discs and explore how they are affected by injuries such as herniated discs and degenerative diseases like arthritis. Updated: 10/14/2021
Create an account 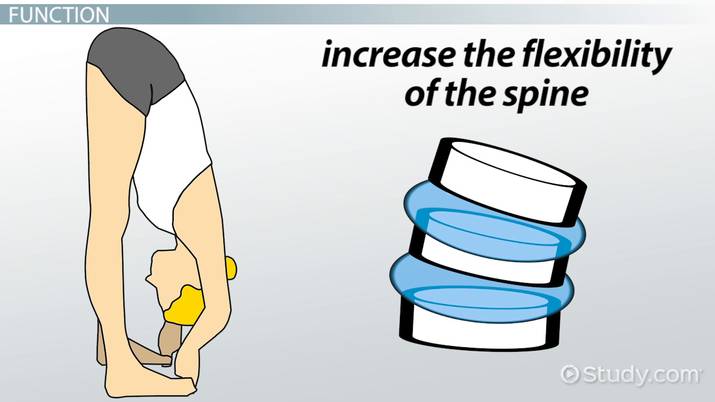 Coming up next: Animals with Closed Circulatory Systems

Between the individual vertebrae in the cervical, thoracic, and lumbar regions (not in the sacrum and coccyx) are oval shaped pads made of fibrocartilage called intervertebral discs.

The discs have a tough outer covering of cartilage that provides support (the annulus fibrosus) and a soft, jellylike center that provides the cushioning (the nucleus pulposus).

The intervertebral discs have the following functions:

The intervertebral discs are vulnerable to a variety of injuries. The most common is called a herniated disc (a.k.a., a bulging disc or slipped disc). Herniated discs usually occur later in life. As the discs age, they begin to break down and when a person puts excess stress on them, like lifting something heavy at the waist instead of with the legs, they can rupture, break open, and the jellylike center leaks out. The jelly can irritate surrounding nerves and cause them to become inflamed. This inflammation can put pressure on the nerves, which result in back pain. Herniated discs can be diagnosed several ways, including palpitation (feeling the spine), or x-ray and MRI imaging. Treatment for herniated discs can be as simple as rest and allowing it to heal, taking anti-inflammatory medication to reduce the swelling, and, in some extreme cases, surgery can be performed to repair the damage.

The discs are also vulnerable to disease in some people. Aging can lead to a narrowing of the spine, the spaces between the discs, and the hole through which the spinal cord passes. This condition is known as spinal stenosis. The discs will narrow and shrink in spinal stenosis, and this shrinking can cause a herniated disc even without excess pressure being applied to the back. The discs are also vulnerable to arthritis. Osteoarthritis degenerates the cartilage between joints, and although it is most often seen in the hands, knees, and shoulders, it can affect the intervertebral discs and cause them to break down.

Another more serious type of arthritis called rheumatoid arthritis attacks the fibrous outer covering of cartilage in the joints. This is harder to treat because this type of arthritis is an autoimmune disease, which means the body's immune system attacks its own tissues, in this case the cartilage in the joints. Treatment for all these conditions involves taking anti-inflammatory medications, doing exercises to strengthen the back, possible surgery, and, with rheumatoid arthritis, treatment can involve medications that suppress or slow down the immune system.

The spine has 33 vertebrae that are each separated by pads of fibrocartilage called intervertebral discs. The discs function to cushion the spine and reduce the stress caused by impact. They also provide some flexibility, allowing us to bend over at the waist. The intervertebral discs are vulnerable to injury and can rupture under stress, which causes a herniated disc to form. In some individuals, the spine degenerates as they get older and causes spinal stenosis, which causes the discs to shrink in size. The discs are also vulnerable to arthritis, which can wear away the cartilage between the vertebrae and cause back pain. Diagnosis and treatment of these conditions include palpitation of the spine, imaging the spine with x-ray or MRI, taking anti-inflammatory medications, exercises to strengthen the back, and, in worst-case scenarios, surgery to fix the damage.

The Three Layers of the Heart Wall | Location, Structure & Function

Microvilli vs. Cilia Structures & Sizes | What are Microvilli & Cilia?

Trabeculae Bone Function | What Is a Trabecula?