Whether you're new to functions or just confused by them, this lesson covers the basic underlying concepts. Simple explanations and references to the real world make it easy to understand.
Create an account

We use the word 'function' in everyday life to mean all kinds of different things. A function is what something does. You could say that the function of a cup is to hold water. A function can also be a special event. But in math, 'function' has a special meaning. A mathematical function defines a relationship between inputs and outputs.

The easiest way to get a handle on functions is to think of a function as being like a factory. Let's say you want to make some paper. You would need:

The dead trees go into the factory, and they're processed on the equipment. Then paper comes out of the factory and into your printer. The trees are the input, and the paper is the output. The specific kinds of equipment in the factory control the process of turning the input into the output.

A function is just like a factory, except the raw materials are numbers, and the processing is doing math with them. 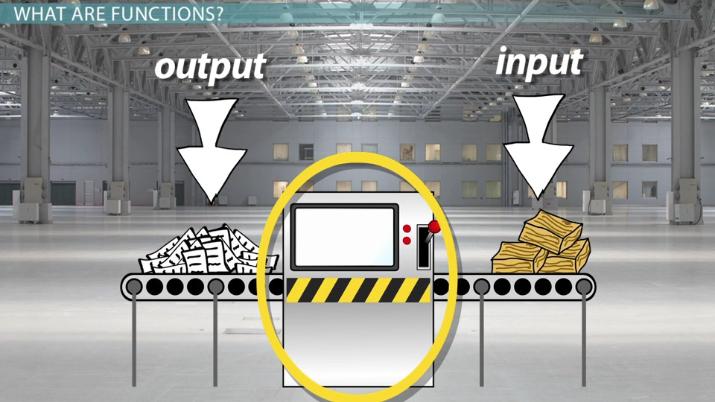 Coming up next: What is a Function: Basics and Key Terms

Functions are the same way. You can't put any number into any function.

You'll get into the reasons why the domain of a function can be restricted in another lesson; for now, just remember that it can.

Another important property of functions is that for every input to a given function, there is only one output. If we look at our example function again, if you plug in 3 and apply the rule 'multiply by 2,' you'll only ever get 6 as the output. There's no possible way to get any other number with 3 as the input. You can put in a different number and get a different output with the same rule, but with the 'multiply by 2' rule as our function, you can't put in 3 and get 8, because 3 times 2 does not equal 8.

For a completely different function, you would get a different output for putting in 3 because you're applying a different rule. But for any one function, each input can only have one output. If you can get multiple outputs from the same input, then the rule you have isn't actually a function.

So far we've been using diagrams to show how functions work, but that's not how they'll actually appear in real life. Instead, you'll see something called function notation. Function notation is the set of conventions that mathematicians use to write about functions. They don't want to go around drawing diagrams all day, so everyone agreed on a different way to do it.

The confusing part about function notation is that it's out of order. It doesn't show the input first, the processing second, and the output last.

This function is named F.

X here is a variable representing any number in the domain of the function; any number that you could possibly plug in. The F with the x in parentheses is pronounced 'F of x' and refers to the output that you get when you plug x into the function's rule for processing numbers. 'x + 2' gives you the rule.

This kind of notation can be confusing because it looks like you're supposed to multiply F times x. But that's not true. F is not a variable; it has no value. It's the name of the function. F(x) has nothing to do with multiplication!

If it looks really confusing right now, just stick with it. Function notation is hard for a lot of people at first, but once you use it more, you'll get used to it.

In this lesson, you got an introduction to functions. A function is a rule for transforming a certain set of inputs into outputs. Think of it as being like a factory, where you put in some raw materials, put them through some processing, and end up with a finished product - only in a function, the 'processing' is actually math.

What are Polynomials, Binomials, and Quadratics?

Determine the Rate of Change of a Function

What is a Logarithm?

What is a Function? - Applying the Vertical Line Test

What is a Matrix?

What is a Function in Math? - Definition & Examples

How to Solve Multi-Step Algebra Equations in Word Problems

Draw a Graph Based on the Qualitative Features of a Function