Graph theory is the study of graphs and their ability to present data sets in a visual and easy-to-approach fashion. Learn more on graph theory, see real-world examples, explore comparisons to simple maps, and review vocabulary in graph theory. Updated: 10/28/2021
Create an account

In math, there is a whole branch of study devoted to graph theory. What is it? It is the study of graphs. Yes, you may not believe that graphs can be so complicated, but as you will see, the study of graphs and how they connect is a big field of study. So big, in fact, that big businesses as well as public transportation companies spend much time on graph theory to make sure that everything functions smoothly.

For example, utility companies, such as those that supply electricity, rely on graph theory when setting up their power poles to make sure the poles are located in the best possible location in relation to all the other poles. Public transportation companies, such as buses, use graph theory to plan the best possible route between a number of destinations. Yes, all of these use graph theory. If you look at a map and you try to plan a route from point A to point B, you yourself are practicing graph theory. 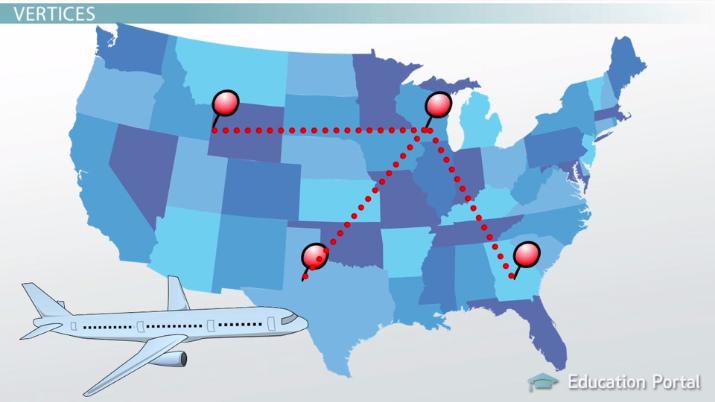 Coming up next: Graph Theory Concepts and Terminology

If this graph is a simplified version of our map, then we see that we have four cities - the four points - and five roads - the five straight lines. Graph theory then is about studying this graph and seeing what is the best possible route to take between any two points in this graph. Public transportation companies can use this graph to find the best possible route between points A and C, for example. Utility companies can use this graph to determine which poles are connected to each other and how best to supply power to all the poles.

Now, for the vocabulary. Notice the points A, B, C, and D. These points are called vertices in graph theory. When we have several points, we have vertices. If we have just one point, we call it a vertex. Vertices are the points that lines come and go from. Some vertices can have just one line connecting to it. Others can have several lines connecting to other vertices. For example, in our graph, points A and C both have two lines connecting them to other points. Points B and D, on the other hand, have three lines. In graph theory, you can have an unlimited number of lines connecting one point to other points. The graph we have here is a very simple graph just to get us started in learning about graph theory.

Our last vocabulary word is loops. A loop is an edge that connects to the same vertex. If you have shoelaces, then look down at them, and you will see loops. That is what you will see in the graph drawing, as well. Here's an example:

In this example, we have a loop at point C. See how this edge is rounded? It looks like a loop, and it takes you back to where you started; it connects to the same vertex. In graph theory, you can either allow or not allow the presence of these loops.

Let's now review what we've learned. We learned that graph theory is the study of graphs. This is a useful field because it allows you to find the best possible routes between two points. You can say that a graph looks like a simplified map. In graph theory, we have some basic vocabulary. The first is vertex or vertices. These refer to a point or points on the graph. The next is edges. This refers to the lines in the graph. Lastly, we have loops. These refer to edges that connect to the same vertex. If you were traveling on one of these loops, you would end up where you started.

You might accomplish these objectives after you have finished with this lesson:

Huntington-Hill Method of Apportionment in Politics

The Traveling Salesman Problem in Computation

The Pairwise Comparison Method in Elections