What Is Organic Chemistry?

When we talk about organic foods, we mean that they were grown using only natural fertilizers. Now, what does this have to do with chemistry? Well, it turns out that for a long time chemists have been studying the molecules that make up living things, and for a long time they called this organic chemistry.

To them, organic chemistry was the study of molecules that came from living things and from formerly living things. These molecules included sugars (such as glucose), proteins and the amino acids that make them up (such as glycine), fats and also hydrocarbons (such as methane - which you know is natural gas - and octane - which is a component of gasoline) which are molecules that came from things that used to be living.

This leads us to our new definition of organic chemistry, which is the study of molecules that contain carbon. 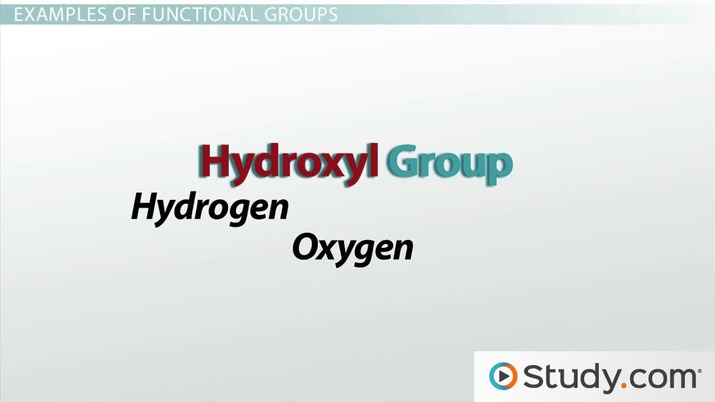 Coming up next: Introduction to Organic Molecules II: Monomers and Polymers

What are Functional Groups?

Now, if all these molecules were like methane and octane (containing only carbon and hydrogen), life wouldn't be exciting. In fact, life probably wouldn't exist, since these molecules mostly sit around interacting with other like molecules. Unless oxygen and fire come along - in which case, they burn and turn into carbon dioxide and water. Since we're not running around as flaming people, this means there must be a little more to the story. It turns out, this is true.

While organic chemistry is the study of molecules that contain carbon, they also contain other atoms. So, organic molecules can contain carbon, hydrogen, oxygen, nitrogen, phosphorus, and sulfur. All of these atoms come together to make what we call functional groups.

Now, think of it as if you're going to go on an okcupid.com or a match.com date. You've never met this person before, so you need to remember what he or she looks like. So you look at the profile and say: this person whose name is ChemistryIsAwesome has glasses, brown hair and he or she is about 5-foot, 8-inches. All of this information gives you some idea of what this person looks like and how you will recognize him or her. That is exactly what functional groups do for us when we meet new biological molecules.

The first functional group we're going to meet is the alcohol or hydroxyl group. Now, looking at the name hydroxyl you might think this thing probably contains hydrogen and oxygen. If that's what you're thinking right now, you're right.

So the general picture of an alcohol is that it is a group that contains carbon attached to oxygen, which is single-bonded to hydrogen. A lot of times, chemists use the shorthand R to talk about something that contains carbon. In some cases, it can be carbon or hydrogen, but in the case of an alcohol, it's always a carbon, because if it was not a carbon-containing group then it would be water.

The next functional group I'd like to introduce you to is the amine. The simplest amine is ammonia and is often found in bathroom cleaners. It has a very simple chemical structure which is a nitrogen atom that is bonded to three hydrogen atoms. It's quite small and quite volatile, and that's why it has a very pungent smell.

More generally, amines are a nitrogen atom that is single-bonded to three different groups that contain either hydrogen or carbon. So, in the case of amines in our group, it can be either hydrogen or carbon and it doesn't matter. Amines are found in amino acids and are very important in biological systems because they are basic and they can accept protons from more acid substances.

The next functional group that I'd like to introduce you to is the ether, which is found in sugars. The ether group consists of oxygen that is single-bonded to two different carbon atoms. An example that you might be familiar with is diethyl ether, which was used as an anesthetic for a long time. So, if you've ever seen a movie where someone is going in for a surgery and they put a cloth over their face, it contained diethyl ether and was meant to knock them out.

A more general version of ether would be an oxygen atom with any two carbon-containing groups on either side of it.

The next functional group is the carbonyl. A carbonyl is a carbon that is double-bonded to oxygen. A carbonyl-containing molecule that you're already familiar with is acetone, which is found in nail polish remover. Carbonyls are found fairly often in biological systems.

A carbonyl-containing functional group is the carboxylic acid. When you look at the word carboxylic you probably see carb, as in carbonyl, and oxyl, as in hydroxyl. It turns out this is the structure of the carboxylic acid. It consists of a carbon that is double-bonded to an oxygen and single-bonded to an oxygen that is single-bonded to a hydrogen (which we know is a hydroxyl group). So it is a carbon that is both a carbonyl and bonded to a hydroxyl group. These are found in amino acids and fatty acids in our body. One that you may be familiar with is acetic acid, the major component of vinegar and what gives it that lovely pungent smell.

Esters are important in biological systems because they hold fats together. They bond fatty acids to glycerol to form mono-, di- and triglycerides. In addition, esters are one of the things that make fruits smell really nice.

We've reached the end of our lesson and I hope that you've enjoyed learning a little bit about organic chemistry and also meeting some of the different functional groups that we'll be encountering as we meet new molecules.

Once you complete this lesson you'll be able to:

Types of Genetic Recombination in Bacteria

What Are Tissues? - Types & Explanation