Ellie holds a B.A. with Honors in English from Stanford University. She is pursuing a Ph.D. in English Literature at Princeton University.

Through his uniquely creepy monologues about killers and monarchs, Robert Browning's works reflected his opposition to the status quo during his life in Victorian England. Explore what makes Browning's poems so disturbing but popular even in modern society. Updated: 08/21/2021
Create an account

Today we're talking about the life and works of the Victorian poet Robert Browning. He lived from 1812 to 1889, primarily in London and Italy. For a nineteenth-century dude, he was kind of modern in a bunch of maybe negatively surprising ways - modern in a college-graduate-slacker way.

He lived at home until he was 34, and he was dependent on his parents until he got married. His parents were really encouraging of his artistic pursuits; they were really into helping him out. They actually financed the publishing of his earliest poems, like parents today who self-publish their kids' work. He wrote a book of poems when he was 12, but he destroyed it when no one wanted to publish it. That doesn't seem that unusual; I think we all wrote stuff when we were 12 that we didn't want anyone else to see.

He was kind of listless and traveled around a lot on his parents' dime. He was really into Romantic poets, so he liked Percy Shelley. Shelley had been an atheist and a vegetarian, so Browning decided he was going to do that too, like a restless teenager looking for an identity in this phase that he went through. He didn't like school and was tutored at home for a while - so he was a spoiled, homeschooled kid, and he quit college after one year.

He really does sound like those guys who go to college but don't know what to do with themselves; they crash with their folks, take the cash and all this stuff until they have to leave the nest. It sounds like that new HBO show Girls in a lot of ways except that Robert Browning is not a girl. In that way, he's a bit of a relatable guy. We certainly all want to succumb to the impulses that he did, but maybe he just had the resources to actually do so. 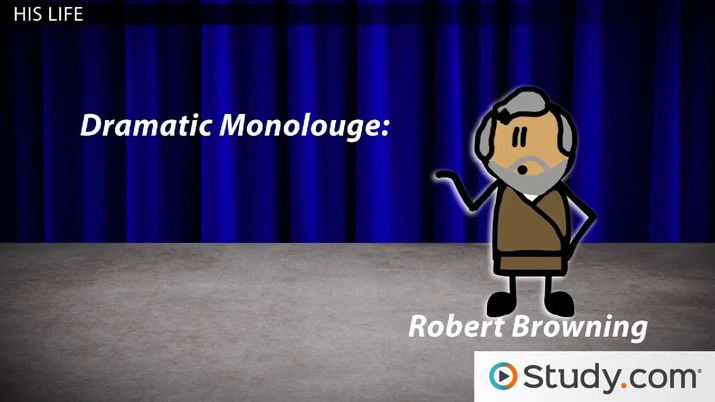 Coming up next: My Last Duchess: Browning's Poetic Monologue

But he did find a lot of poetic success, eventually. It took him a while. He published a lot in the 1830s. He published poems and plays, but didn't really find general popularity, which was not so fun for him. Some of his really early work that he published during that time in the 1840's, like 'Sordello,' was hated. Now, it's actually got quite a bit of fame due to being so difficult - and like all difficult things, it was later embraced. It was promoted by Modernist poet Ezra Pound; he was really into Browning's 'Sordello.'

But in 1835, Browning publishes a poem called 'Paracelsus,' which is about a German alchemist. This actually did get a certain amount of praise and attention from people like William Wordsworth, Thomas Carlyle and even Charles Dickens. These guys really encouraged him to keep writing. Widespread critical success still eluded him, but these guys encouraged him to keep going.

His writing fell a bit by the wayside when he met and married the much more popular poet Elizabeth Barrett in 1845. A year later they were married and they moved to Italy because she was in poor health. That was the thing that you did back then; you moved to warmer climes to make yourself feel better. I wish that was still a thing so you could just jet off to Hawaii whenever you have a cold. They stayed there in Italy until she died 16 years later, and Browning continued to write during this time. He wrote a book in 1855 called Men and Women, but commercial success still eluded him. He still wasn't doing that great.

After Elizabeth Barrett died in 1861, Browning came back to England (since the reason they went to Italy was for her health), and finally his professional career started to get going a little bit more. The first big thing that happens is that he publishes, in 1868, a little thing called The Ring and the Book, which is a 12-book blank verse poem based on a major murder case that was in 17th century Rome. It's kind of a cool thing. Each of the 12 books is basically a different speaker (except the first and the last are Browning himself talking).

It introduces the main form that Browning is remembered for, and that's dramatic monologue, which is essentially a speech given by a character so you hear their inner thoughts and feelings. The poems are about the character as much as they are about what they're saying. In The Ring and the Book, Browning uses these monologues to give the different perspectives of a bunch of different people involved in this murder case. It's almost like a modern-day crime series in a lot of ways. I think that's been picked up a lot by TV lately. Even though it sounds like kind of a strange work (at least to me), The Ring and the Book was actually a huge commercial and critical success. It finally gets Browning the recognition that he's been looking for all his life.

In the 1870s, Browning publishes some more long-form work, and he really retains his general popularity. It's kind of funny; his only remaining short-form work was actually published the day that he died in 1889. Consequently, his reputation grew a lot after his death, so posthumously he's hailed as one of the great Victorian poets, along with his wife, who was always recognized as being pretty good.

Looking Back on His Work

Now, we can look back on things he wrote and pick out other significant things that maybe his contemporaries weren't quite as enthusiastic about. Of all of these, there's two really big standout works. Again, they're a pair of dramatic monologues because that's what he was really good at. The poems are 'Porphyria's Lover' and 'My Last Duchess.' 'My Last Duchess' has got a whole video to itself, so we're just going to gloss over that right here.

'Porphyria's Lover' is, like 'Duchess,' from an 1842 volume called Bells and Pomegranates No. III - which is an awesome title. This is Browning's first-ever short dramatic monologue; the first that he wrote. It indicates (again, you'll see this with 'My Last Duchess' to an extent as well) his fascination with abnormal psychology, which makes sense for someone who writes dramatic monologues. It's a little more interesting if there's something cuckoo going on up there. In 'Porphyria's Lover,' the speaker actually strangles his lover with her own hair. What?! Crazy stuff. This morbidity might have been what kept people away from his work, from embracing it wholeheartedly, but the poem's really got all the markings of a Browning classic. It's got great speech lines. I'm just going to read a bit to you:

That moment she was mine, mine, fair,

Perfectly pure and good: I found

A thing to do, and all her hair

In one long yellow string I wound

Three times her little throat around,

What?! It's standard Browning, right? We're presenting this riddle of this character who is insane and probably not very sympathetic. It's also poetry. It's rhyming poetry - it's not even just blank verse. But we almost don't notice, because he's so good at representing speech, that we are reading a poem. That might explain a bit the success of The Ring and the Book, because it's all like this. Again, it's purposefully (and this is why 'Sordello' is such a challenge today) weird and challenging. It's presenting you a puzzle to solve. You're trying to figure out why he's doing what he's doing, and with regard to the narrator in 'Porphyria's Lover,' what's his deal? Is he a reliable narrator? Do we trust him? Is more being said about him or about what he's saying? These are the questions that tend to come up when you approach 'Porphyria's Lover' or really any Browning dramatic monologue. You want to pick apart what's real, what's not, what's in the character's head and what's outside.

So yeah, Browning was kind of a cool guy, kind of a weird guy. He liked to do things differently, whether that's living with your parents until you're 34 or writing poems in which we have to sympathize with people who kill their wives, like in 'Porphyria' and also - spoiler alert! - maybe in 'My Last Duchess.' He didn't have such good success early on with poetry writing. Fortunately, later in life, he got a lot more successful. He wrote The Ring and the Book, which was pretty popular. Then we look back at some of his more overlooked poems, like 'Porphyria's Lover,' 'My Last Duchess' and 'Sordello' that are also great. His wife was famous too - Elizabeth Barrett was always well-known as a good poet. So that's Robert Browning.