If you've ever looked up at Half Dome in Yosemite National Park, Mt. Rushmore in South Dakota, or Stone Mountain in Georgia, you were looking at intrusive rocks. We're going to investigate how these rocks form and how you can identify them in the field.
Create an account

What Are Intrusive Rocks?

If you have trouble remembering the definition of intrusive rocks, remember that intrusive rocks form inside the earth. You'll also see intrusive igneous rocks referred to as plutonic rocks, named after the Roman God of the underworld, Pluto. 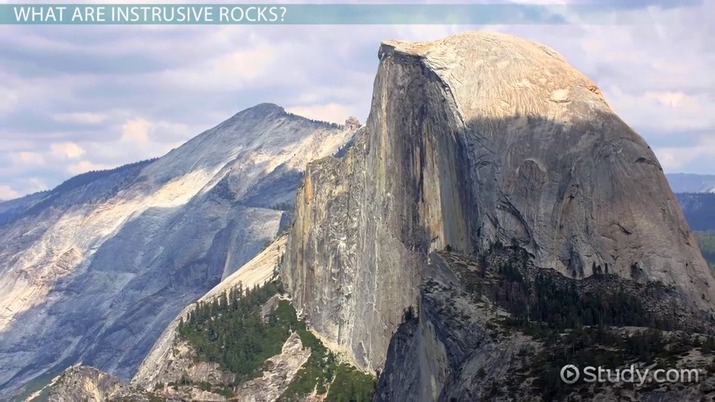 Try it now
Back
Coming up next: Obsidian: Definition, Properties & Uses

How to Identify Intrusive Rocks

Intrusive igneous rocks have a characteristic appearance that makes them easy to identify. We'll cover some key features of these rocks and how they are formed.

All igneous rocks are distinguished from other rock types by their interlocking texture. Interlocking texture means that there is no space between individual crystals, because the crystals grew into one another. During cooling, crystals begin to form in the magma, much like ice crystals in a partially frozen drink. As cooling progresses and the crystals grow larger, only small pockets of liquid remain. The final crystallization of these small pockets of liquid results in the interlocking crystal texture.

Since intrusive rocks are cooling underground, the surrounding rock insulates the magma allowing it to cool very slowly. This slow cooling allows the crystals to become a much larger size than if they were cooled quickly on the surface. Thus, you can identify intrusive rocks by their large crystals, which can be seen with the naked eye.

Intrusive igneous rocks can have a range of crystal sizes. Those with roughly the same crystal size are called phaneritic.

One thing you may be wondering is if intrusive rocks form underground, how do they get to the surface? There are two processes normally responsible for bringing intrusive igneous rocks to the surface. One process is uplift, in which tectonic forces cause the rocks to become raised in elevation. Once our intrusive rocks have been uplifted, there is still overlying rock that must be eroded away in order for them to appear on the surface. Erosion occurs when either water or wind remove rock and soil from one location and deposit it in another.

The iconic rock formations of Yosemite National Park were massive magma bodies about 100 million years ago, during the same time dinosaurs were roaming the earth. During this time, they were likely topped by a large volcanic mountain range, much like the Cascade Range in the Pacific Northwest. Within the last 100 million years, the volcanoes were completly eroded away leaving us with the fossilized magma bodies that make up the iconic rocks of Half Dome and El Capitan.

Let's review. Intrusive rocks are igneous rocks that form when magma cools under the earth's surface. They can be identified by their large interlocking crystals, which grew large due to their slow cooling. Granite is a common type of intrusive rock that is distinguished by the presence of blocky pink potassium feldspar crystals. In order for intrusive rocks to be visible at the surface, they must be first uplifted. Then the overlying rock must be eroded away to unearth the intrusive rocks.