Irony occurs when a result is the opposite of the expected outcome, and is used by Bradbury in 'Fahrenheit 451' to emphasize several concepts. See the dramatic irony involving the firemen, verbal irony surrounding Mildred, and situational irony describing Montag's character change. Updated: 12/08/2021
Create an account

Until his death in 2010, Britain's largest dog was a Great Dane measuring 7'3'' tall on his hind legs and weighing 238 pounds. He was named 'Tiny.' Tiny's name is a real-life example of irony. Irony is when the opposite of the expected happens. Authors frequently use irony to make a point. Let's look at examples of three types of irony in Fahrenheit 451 by Ray Bradbury. 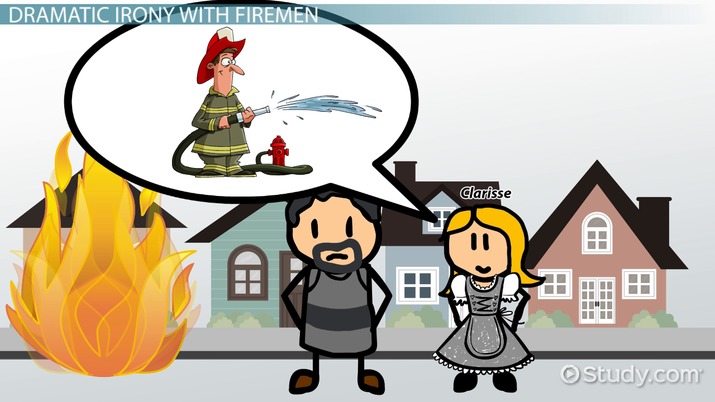 Coming up next: Motifs in Fahrenheit 451

When we think of firemen in our world, we think of heroes. Firemen risk their lives to protect their communities during car crashes, floods, and fires. Things are different in Montag's world. In his dystopian community, people are afraid of firemen because firemen are the ones that set fires to the homes of rule breakers. When Montag meets his teenage neighbor, Clarisse, she asks, 'Is it true that long ago firemen put fires out instead of going to start them?. . .I heard once that a long time ago houses used to burn by accident and they needed firemen to stop the flames.'

Montag just laughs at her because he comes from a long line of firemen. According to his teaching, houses have been fireproof since Benjamin Franklin opened the first fire station to censor British books. This is an example of dramatic irony because the audience is aware of the truth when the character isn't. Clarisse is right, but Montag finds her theories laughable.

Montag's wife, Mildred, who is a cold and frivolous woman, refers to the characters in her television show as her family. When Montag comes to her upset about having to kill the woman with her books the night before, Millie has no time or sympathy for her husband. When she finds out that Montag has been hiding books in their home, all she thinks about is losing her television entertainment. '. . . if Captain Beatty knew about those books - He might come and burn the house and the `family.' That's awful!'

In an example of verbal irony, Montag sarcastically asks her, 'Does your `family' love you, love you very much, love you with all their heart and soul, Millie?' Verbal irony is when a character knowingly says something that means something else for the purpose of making a point.

A good example of situational irony is when Montag, who has spent his entire career burning books and enjoying the flames, switches directions. Situational irony is when the opposite of what one would expect to happen occurs. Suddenly, Montag realizes that his victims have something that he has lost along the way. 'It took some man a lifetime maybe to put some of his thoughts down, looking around at the world and life, and then I came along in two minutes and boom! It's all over.'

Over a short period of time, Montag moves from judge, jury, and executioner of those who break the laws on censorship, to a perpetrator of that crime. Still, he is surprised when he realizes that Beatty, the Captain, is forcing him to burn down his own house as his wife flees the scene.

Irony is when the opposite of what is expected happens. In this novel, we see examples of three types of irony.

The Salamander as a Symbol in Fahrenheit 451

History of the Fireman in Fahrenheit 451