Ronald, with my Masters in English, has taught composition, literature, humanities, critical thinking and computer classes.

F. Scott Fitzgerald's 1925 novel, The Great Gatsby, employs irony, a literary device, to shape readers' interpretations of characters and events. Learn about irony and how Fitzgerald uses it to gain a clearer understanding of this important American text. Updated: 11/30/2021
Create an account

Have you ever watched a horror movie that features a seemingly unstoppable killer? At some point in the movie, the potential victim believes that he or she has escaped the murderer, but we know otherwise. This is irony. It is a literary device writers use to contrast what the characters believe and what we, the audience or reader, believe will happen. It can also be used to contrast what we expect to happen with what actually happens. The novel The Great Gatsby has many examples of irony. We will look at a few examples of irony as they appear in the novel. But first, let's get a bit of background information on the book.

Told from the viewpoint of Nick Carraway, The Great Gatsby is about the obsessive love Jay Gatsby has for Daisy Buchanan, the wife of Tom Buchanan, and the affair Tom Buchanan has with Myrtle Wilson, a car mechanic's wife. It is a story of the super-rich and the morally challenged. It is the story of people who think themselves superior, but we the readers know otherwise. This is the foundation for a novel oozing irony. 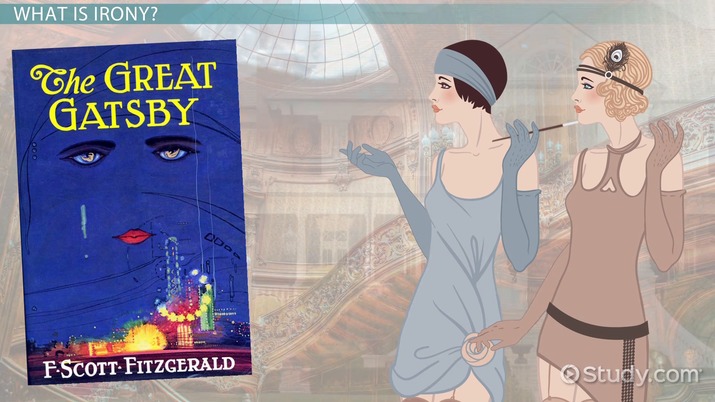 Try it now
Back
Coming up next: Dramatic Irony in The Great Gatsby

Irony in Chapters 1 and 2

In Chapter 1, we are introduced to Nick Carraway, the narrator of the novel. This entire novel is written from Nick's viewpoint. Nick's relationship to Gatsby is an example of irony because Nick tells the story about Gatsby but he does not like the man. He says, 'Only Gatsby, the man who gives his name to this book, (...) represented everything for which I have an unaffected scorn.' As readers, we wonder why Nick wants to talk about Gatsby. This irony of Nick Carraway's attitude toward Gatsby makes the reader question why Nick chose to tell this story. The moral that Fitzgerald wants the reader to get out of the novel is that the rich are morally shallow. He uses irony to point this out.

Myrtle Wilson appears in Chapter 2 as the mistress of Tom Buchanan. Her husband is a struggling auto mechanic. But the reader sees Myrtle put on airs of a woman of wealth as she discusses the difficulty of finding suitable help. This irony points out how the perception of being rich can change people and make them callous.

Irony in Chapters 3 and 5

Gatsby throws extravagant parties at his mansion. People just show up and are not invited. In Chapter 3, Nick attends a party. Here, he has a chance to tour Gatsby's fabulous mansion. In the library, he meets Mr. Owl Eyes. As Nick looks at the books, he realizes none of the books have been opened. They are to impress. The library, the mansion, and the parties are all just for show to lure Daisy in with the bait of money. The irony is that we know that this is not what Daisy needs.

Chapter 5 is the physical center of the novel and the point where Gatsby and Daisy meet for the first time after five years. In this chapter, Gatsby arranges for Daisy to see his house and the possessions he amassed to impress her. The irony is that he can never be part of her circle because he was not born into wealth. This irony shows that Gatsby believes money can win Daisy. But Daisy needs not only a person with money but also one with social standing. Both are shallow approaches to love.

Irony in Chapter 7 and 8

Chapter 7 is the most action packed chapter in the novel. As the chapter starts, Tom learns about the affair between Daisy and Gatsby. He also discovers that his mistress is about to move west. Nick points out the irony of losing both women in his life to other men. As Nick says of Tom Buchanan, 'His wife and his mistress, until an hour ago secure and inviolate, were slipping precipitately from his control.' Tom Buchanan, the cheater, is now the cheated. This is irony.

Later, at the hotel, Tom Buchanan and Jay Gatsby argue over Daisy. As Tom and Daisy's marriage dissolves, wedding music plays from another hotel room. The irony leaves the reader wondering if those getting married will be in the same situation as Tom and Daisy in five years.

Finally, upset by the argument, Daisy and Gatsby drive home. In perhaps one of the great ironies of the novel, Daisy kills Myrtle when Myrtle runs in front of Gatsby's car. It is a hit and run. The irony is that the wife kills her husband's mistress without knowing that it's his mistress. This irony leads the novel toward the conclusion.

The Great Gatsby is a tragedy. So Gatsby must die. But he dies for a crime he did not commit. Myrtle's husband finds Gatsby, and shoots and kills him. Tom pinned Gatsby as the driver of the car. With this act, Tom Buchanan has Daisy back, and, ironically, Daisy is in the same situation as she was in Chapter 1.

Gatsby is dead, and Nick is left to arrange the funeral. At Gatsby's funeral, only three people attend. Gatsby, the great party giver, is alone. Gatsby's partygoers bail when the party is over. The irony is that all Gatsby's money cannot buy friends or the woman he loves.

There are several different types of irony, one of which is when the opposite of what you expect to happen happens and another of which is when the audience knows something that the characters in a story don't. Throughout, the novel uses irony to contrast the shallow world that Daisy, Tom, Nick, and Gatsby live in with casual disregard for other's lives with the world that everyone else lives in. F. Scott Fitzgerald employs the literary device of irony through a variety of methods, including the characters' speech and actions, and the situations they find themselves in.

Satire in The Great Gatsby

Alliteration in the Great Gatsby

Imagery in The Great Gatsby: Examples

Tone in The Great Gatsby

Allusion in The Great Gatsby