Kristin has an M.S. in Chemistry and has taught many at many levels, including introductory and AP Chemistry.

Isotopes are variations of the same element with differing numbers of neutrons and, subsequently, different atomic masses. Learn how scientists consider isotopes when they calculate average atomic mass. Updated: 08/22/2021
Create an account

I have always heard that you should never compare apples to oranges, so I am going to start off this lesson by comparing apples to apples. Later on, this may help you remember how to compare and contrast different isotopes of atoms. So, more specifically, we are going to describe three different types of apples: the Crabapple, the Golden Delicious, and the Granny Smith - all very different but all still apples.

So, what makes them apples? They are all biologically named 'malus domestica.' They grow on trees. They have stems. The list goes on. But what makes them different? First of all, the Crabapple is very small, it's red in color, and it tastes quite sour. For the purposes of this lesson, we are going to give it a fictional mass of 1 amu, which we'll call the 'apple mass unit,' whereas the Golden Delicious is medium-sized, yellowish in color, tastes sweet, and we're going to give this a mass of 2 amu. Finally, the Granny Smith is large, green, and tastes sour. We will give this apple a mass of 3 amu, so it weighs three times as much as the Crabapple. They're all similar in that they are apples, but they have many different characteristics. So, if I were to ask you what's the mass of an apple, what would you say? 1 amu? 2? Or 3 amu? Well, it all depends on which type of apple you're referring to. 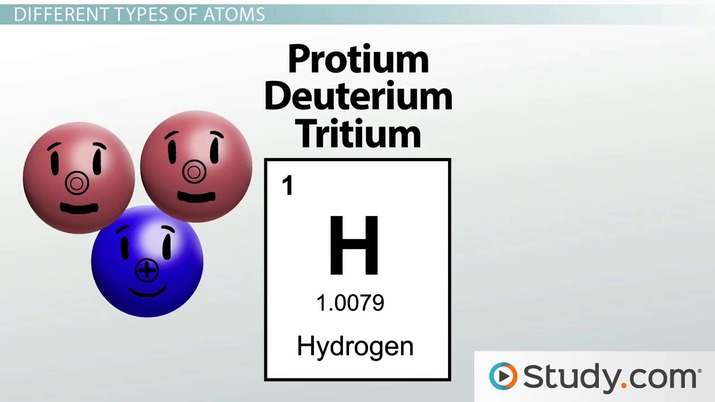 Coming up next: Avogadro's Number: Using the Mole to Count Atoms

Now, let's compare atoms. In a previous lesson, you learned about the makeup of the nucleus and how it contains both protons and neutrons, both of which are the primary contributors to the mass of the atom (the mass of the electrons is not significant enough to keep track of). The number of protons an atom has will determine which type of element it is, and all atoms of the same element will always have the same number of protons. Where things get interesting is in the number of neutrons in the nucleus. We are going to use hydrogen as our example.

Hydrogen has three major isotopes. Remember that isotopes have the same number of protons but different numbers of neutrons. The most common isotope of hydrogen has only one proton and zero neutrons. If both protons and neutrons have a mass of about 1 amu (atomic mass unit), the mass of this atom would be about 1 amu (just the mass of the proton). This isotope of hydrogen has a special name, protium, and it makes up over 99.98% of all the hydrogen atoms.

The next most common isotope is called deuterium. Its nucleus contains one proton and one neutron, so it has a mass of about 2 amu. It makes up less than two hundredths of a percent of the population of hydrogen atoms.

The last isotope is called tritium and it has, as you may guess, still only one proton, but it contains two neutrons in its nucleus, giving it a mass of 3 amu. There is very little tritium that exists, and it's very unstable.

So, if I were to ask you what the mass of a hydrogen atom is, you would need to know which isotope I was talking about - protium, deuterium or tritium.

Remember that these three isotopes are all chemically the same, just like our three different types of apples are all just apples. They're all still hydrogen, and they will all react the same way. For example, you may know that water (H2O) is made up of two hydrogen atoms and one oxygen atom. What you may not know is that although most of the water you drink contains the protium isotope of hydrogen, there are a few molecules in your glass that will contain the 'heavier' deuterium isotope. Does this matter? Not really. Our bodies contain a small percentage of 'heavy' water, and we are okay. We wouldn't want to make a practice of drinking 100% 'heavy' water on a daily basis, though. This special 'heavy' water is used in some nuclear reactors and some scientific laboratories.

Now, I'd like to focus your attention to the periodic table, more specifically, the hydrogen block at the top left corner. See that little number below the chemical symbol? That is called the average atomic mass (or the atomic weight). Remember the units for atomic mass are amu (or atomic mass units). So, which isotope's mass are we seeing? Protium, deuterium or tritium? The answer is all of them.

Another example is lithium. There are two major isotopes of lithium: lithium-6, which has three protons and three neutrons and lithium-7, which has three protons and four neutrons. According to the periodic table, the atomic weight is 6.941 amu. Based on this, which isotope do you think is most common? Lithium-6 or lithium-7? Because the number 6.941 is much closer to 7, there is likely to be much more lithium-7 that exists in nature. Keep in mind, just like the apples and the hydrogen atoms, both of these lithium isotopes will have similar behaviors. Their only difference is their mass.

Because most of our calculations will be dealing with the general population of atoms and not specific isotopes, we will be using this atomic weight value in most of the lessons in this course. So, it's important to know how it's calculated and what it really means. Also, keep in mind, each periodic table may look different from the next, so be sure to orient yourself before you start making calculations.

Isotopes are just variations of the same element; they have the same number of protons, and they will all react the same way. The only difference is they have different numbers of neutrons, which will make their masses different. The abundance of each type of isotope is taken into account when calculating the average atomic mass, or the atomic weight, which is found on the periodic table.

After watching this lesson, you should be able to recognize how isotopes are variations of the same element, and how that's taken into account when calculating the atomic mass.