Adults over the age of 65 are often at risk for dangerous social issues. Learn about the risk factors for people in late adulthood, such as poverty and elder abuse, then explore their impact on older adults. Updated: 10/04/2021
Create an account

Reggie is 72, and he's facing some problems. He worked hard for most of his life and saved money as best he could, but he lost a lot of money a few years ago when he made some bad investments, and now that he's retired, he barely has enough money to survive.

Because of his limited income, he's moved in with his daughter and her family, and some bad things have been happening. His daughter sometimes says things that are mean, and sometimes his son-in-law hits him.

Reggie is in late adulthood, or the time of life after age 65. As people age, they are particularly vulnerable to certain life issues. Let's look closer at two issues that people like Reggie face: poverty and elder abuse. 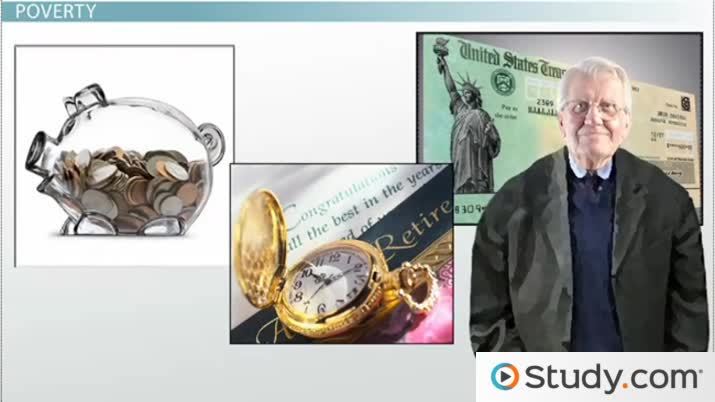 Try it now
Back
Coming up next: What Are the Stages of Dying? - Overview of Kubler-Ross's 5 Stages

Reggie is facing some financial issues, which is not uncommon. Most people in late adulthood are on a fixed income. Following retirement, people often have to live on some combination of savings, pension, and social security. Because they aren't working anymore, they may find that they have much less money to spend, and some (like Reggie) find that they fall below the poverty line.

Poverty is a big issue in late adulthood. It affects many people and can have an adverse effect on physical and mental health as well as diminishing the rates of happiness and life satisfaction. For example, Reggie is very stressed out about money, which has caused his blood pressure to go up. He's also depressed about his money situation and is generally unhappy with his life.

Like many people his age, Reggie has some physical challenges. Not only does he have high blood pressure, he also suffers from arthritis. Because these things cost money to treat, Reggie's lack of funds has an even more detrimental effect on his health.

Poverty isn't Reggie's only issue, though. He is also experiencing elder abuse, which occurs when someone causes harm to a person in late adulthood, through either action or negligence. Often, the abuser is a caretaker.

If 'causing harm' sounds a little general to you, that's because elder abuse can come in many forms. It can involve physical abuse (like when Reggie's son-in-law hits him), sexual abuse, neglect (which usually happens to people who can't take care of themselves), emotional abuse (like when Reggie's daughter says abusive things to him), or abandonment. Essentially, because older adults are seen as vulnerable, anything that causes them harm can come under the heading of elder abuse.

One of Reggie's friends is concerned about him. She's noticed bruises from when his son-in-law hit him and has noticed that he is acting more depressed and withdrawn than usual.

Physical marks, like bruises or bed sores, and depression or withdrawal are two warning signs of elder abuse. Other warning signs include sudden changes in a person's financial situation (which might indicate that someone is exploiting them to steal their money), weight loss, or being nervous or scared more than usual.

Elder abuse, like abuse at other times in life, is a scary experience, and people like Reggie don't always feel brave enough to come forward. But if Reggie or his concerned friend contact someone for help, Reggie can be taken care of in a loving and supportive way.

Late adulthood is the time of life after age 65. During this time, some people find that they are living in poverty, which can cause physical and mental health issues. Further, some older adults end up in a situation where they are exposed to elder abuse, which comes in many forms, including physical, sexual, emotional, and neglect. Though it is scary, reaching out for help can lead to a better situation for older adults dealing with elder abuse.

When this lesson finishes, you should be able to:

Midlife Crisis Stages & Examples | What is a Midlife Transition?

Midlife Crisis Stages & Examples | What is a Midlife Transition?