Ivan the Terrible was one of Russia's most controversial rulers. Learn more about Ivan's reign as the first tsar and how he made Russia into a centralized, militant empire. Updated: 10/25/2021
Create an account

Russia, like most countries, started as a collection of cities that developed into an empire. Early rulers of the empire expanded the area and established Greek Orthodoxy as the official religion. Divisions of power gave way to invaders like the Mongols. Moscow became a very powerful city and eventually challenged the Mongols' control. Eventually, the Mongols were defeated by Ivan the Great, the grandfather of Ivan the Terrible. 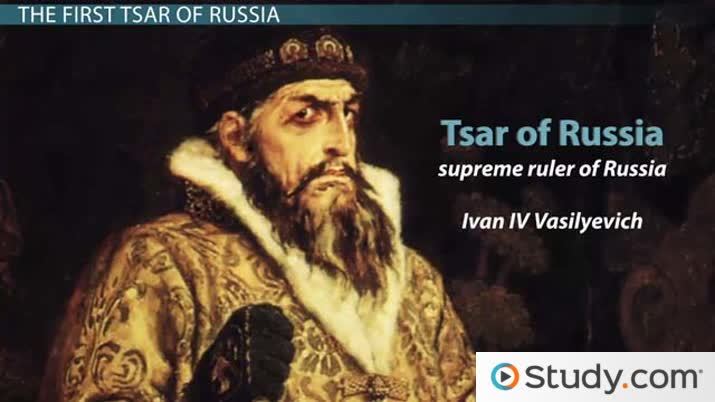 Coming up next: The Council of Trent: The Catholic Church Survives the Reformation

The First Tsar of Russia

Ivan the Terrible, as he is known in English, is actually named Ivan IV Vasilyevich. He was the first tsar of Russia. A tsar was the supreme ruler of the Russian empire. Ivan was actually only three years old when his father died in 1533, making him the Grand Prince of Moscow. His mother helped him rule until her death when Ivan was eight years old. Ivan's appointment as tsar was the beginning of a centralized Russian government.

Ivan introduced a self-government system to rural parts of Russia and also created church and tax reforms. He wanted to resist the attacks of the Mongols and to increase Russia's borders and create a more centralized empire.

In his attempt to expand, Ivan defeated an army in Kazan. After his victory, he commissioned the construction of St. Basil's Cathedral in Moscow. He also expanded his empire into Siberia. Siberia contained a lot of forestry and mountains and provided a vast amount of natural resources that had not previously been available to Russia.

Although he saw some success in his campaigns, his methods caused disruption in the economy and Russian culture. He seized private land from his people and divided it up among his supporters. He also created a police force that was meant to stop any disputes.

Ivan was already unpopular among his people, but after his wife died in 1560, his behavior became extreme. He was suspicious that she had been murdered by a boyar (a member of the Russian aristocracy). Ivan destroyed many of the major boyar families in the region. He was also prone to violent outbursts. During a fit of rage, he beat his daughter-in-law, causing a miscarriage. In another fit of violence, he killed his son and blinded the architect of St. Basil's Cathedral.

Although Ivan was known for his erratic behavior, he possessed other qualities for which he was less known. He was a prominent theologian. He was also a very good public speaker. He was an avid reader and very well-educated.

Ivan's moniker has become the source of argument as well. The Russian word used to describe Ivan is grozny. The word's meaning is closer to 'inspiring fear' rather than 'to be cruel.' The term might have been intended to label Ivan as formidable rather than cruel.

Ivan expanded Russia's landholdings quickly. The expansion opened up trade routes to the east. During his reign, Ivan also fought for 24 years in the Livonian War in an attempt at further expansion. He also fought against the Crimeans, Turks, Mongols, and, as discussed earlier, Siberia.

Ivan appointed governors to help rule his growing empire. This force, known as Oprichniki, became unruly, acted with fierceness and violence, and were completely devoid of accountability. They murdered without justification. Peasants and nobles were killed. They also recruited many to fight in Ivan's battles. The Oprichniki acted as if they were police, bureaucrats, soldiers, and priests. Most of them came from the lower class. Once recruited into the Oprichnina, they were rewarded with wages and property.

The Oprichniki used methods of torture, whipping, rape, and mutilation. Russia was riddled with plague and famine. In the city of Novgorod, the death toll was in the thousands. Ivan feared the city was planning to offer its allegiance to Lithuania in hopes of help. He ordered his Oprichniki to attack the city in 1570. Although the death toll is unknown, it is thought to have reached several thousand. Thousands of the town's people were hanged, drowned, or exiled. The city was looted and its buildings were destroyed. The Oprichniki were soon abolished after they failed to hold up against a regular army in the Russo-Crimean War in 1571. Ivan may have created other groups similar to the Oprichnina, but none were as successful or powerful.

By appointing himself as the tsar of the entire empire, Ivan centralized Russia's government. He also initiated laws that would uphold the power of the government over that of the boyars. Despite Ivan's work to centralize government, his violent methods, along with famine, constant war, and illness, left Russia in disarray when Ivan died in 1584.

Ivan the Terrible was intelligent but prone to violent mood swings. He expanded his empire and opened trade routes with Europe. By doing so, he increased his wealth, centralized his government, and increased availability to natural resources. He was not popular among his people due to his ruthless nature. Although he was successful at his military campaigns, he spent much of his later life working to destroy boyar families. After killing one of his sons, he left Russia to be ruled after his death by his other son, who was a weak leader. After Ivan's death, Russia remained in disarray for years to come.

Seeing this video will help you accomplish the following goals:

Ivan the Terrible and the Making of Russia
Related Study Materials

The Rise of the Russian Empire

The Emergence of Three Empires in Eurasia: Ottoman, Safavid & Mughal

Lord of the Flies by William Golding Chapter 11 | Summary & Quotes

George in A Raisin in the Sun

Spreading Religion in the Age of Exploration

The Commercial Revolution: Economic Impact of Exploration and Colonization on Europe

Effects of Imperialism in Africa