Jack Kerouac didn't just name the Beat Generation, for many people, he defines it. In this lesson, we'll explore 'On the Road, his seminal work, while also reviewing his biography and other notable novels.
Create an account

Have you heard of the Beat Generation? This is a group of writers who emerged in the 1950s. They rejected the literary conventions of Modernism, as well as the materialism that dominated American culture at that time. They also embraced a bunch of other things in their lives and their work: drugs, Eastern religion, open homosexuality, jazz music, disregard for the law and a reputation for no-holds-barred writing that was often labeled obscene. The Beat Generation includes Allen Ginsberg, William S. Burroughs, Neal Cassady and others. 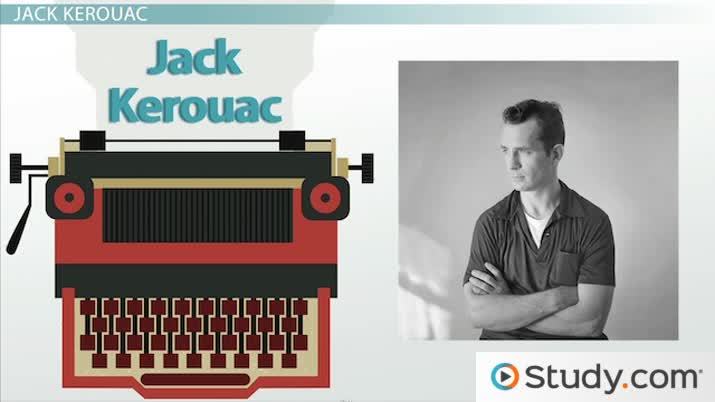 Coming up next: William S. Burroughs: Biography, Writings, and Style of a Beat

And then there's Jack Kerouac. Kerouac reportedly gave the Beats their name. He appropriated it from the black community, where it meant beaten down or weary, then added the meaning beatific, or blissfully happy.

Kerouac's life exemplifies that contrast in meaning. Born in 1922 in Lowell, Massachusetts, to French-speaking Quebecoise immigrants, his older brother died of rheumatic fever when Jack was just four. He'd memorialize his brother in 1963's Visions of Gerard. But in his youth, Jack's family struggled in the working-class town, and he tried to rescue them by winning a football scholarship to Columbia University.

But then his father lost his printing business and sunk into alcoholism, which led to Jack dropping out of Columbia, very briefly joining the military during World War II and then meeting up with Ginsberg, Burroughs and the others who would become the Beat Generation.

With Neal Cassady, Kerouac traveled the nation, having wild adventures. He documented his travels in a flurry of spontaneous writing, in which he taped together pages into a 120-foot long scroll, thereby saving him the time to change the paper in his typewriter. After years of rejection, this work was finally published in 1957 as On the Road, a major hit and the work that defined his legacy.

On the Road: Summary

In fact, On the Road may be the defining work of the Beat Generation. While it's classified as fiction, it's really just a loosely disguised retelling of his actual adventures. The narrator, Sal Paradise, is Kerouac. His friend Dean Moriarity is Neal Cassady. Carlo Marx is Allen Ginsberg. Well, the list goes on. But here's essentially what transpires:

In New York City, Sal meets Dean, who is fresh out of jail and hails from the mythical West that Sal has dreamed of. They hang out with Carlo Marx and others, then Dean and Sal head west to Denver. Then Sal goes on to California.

The next year, they do it all over again, going through New Orleans en route to San Francisco. Later, they do another trip, this time ending up in Mexico City. Their trips are chock full of sex, drugs and, well, jazz. That description is kind of like saying 'Macbeth' is about a bunch of murders in a castle. It's true, sure, but it leaves out what's really important.

On the Road: Style and Themes

Throughout the novel, Sal is on a quest for something to believe in and a sense of belonging somewhere. There's a spiritual side to Sal and Dean's travels. They're looking for something like God, though what that means to them is ambiguous.

As with so many travel stories, On the Road is also about the travelers discovering themselves along the way. Dean is sort of a man-child. In the three years covered in the novel, he gets married three times and has four kids. Sal begins the novel idolizing Dean, then matures and sort of outgrows Dean.

There's also the very common Beat Generation theme of defying social norms. In a time when settling down and starting a traditional family was the American protocol, Sal does the opposite, living a transient life with his bro.

In terms of style, the writing is what you might expect from a frenzied author typing too busily to want to bother loading paper into his typewriter. Kerouac likened his writing style to that of an improvisational jazz musician. He called it 'spontaneous prose,' and it meant that he wasn't much into revisions. More than that, he played with the conventions of words and sentences.

'They danced down the street like dingledodies, and I shambled after as I've been doing all my life after people who interest me, because the only people for me are the mad ones, the ones who are mad to live, mad to talk, mad to be saved, desirous of everything at the same time, the ones that never yawn or say a commonplace thing, but burn, burn, burn like fabulous yellow roman candles exploding like spiders across the stars and in the middle you see the blue centerlight pop and everybody goes 'Awww!'

Let's briefly touch on Kerouac's other notable works. In addition to fiction, he wrote jazz-inspired poetry, but he's best known for his novels.

In 1958, Kerouac published The Dharma Bums. This is another slightly fictionalized account of Kerouac's own life. This time, it's about his dabbling in Buddhism, to which he was introduced by the Beat poet Gary Snyder, and includes the story of a 1955 mountain-climbing adventure he had in California.

In 1960, Book of Dreams was released. This one draws on a dream journal Kerouac kept, and it follows the same characters, barely fictionalized versions of his friends, as they appeared in his dreams.

It's important to note that when On the Road went big, Kerouac took its success hard. He developed a terrible drinking habit. Many of the books published in the wake of On the Road were actually written earlier, when he was getting regularly rejected by publishers. This includes novels like The Subterraneans, Doctor Sax and Desolation Angels.

Since many of these works pre-date On the Road, the fictionalized version of Kerouac in the stories is still the struggling writer that he was before 1957. That changes with 1962's Big Sur. In this novel, Kerouac's alter ego is coming apart at the seams as a result of his big success. He's mentally unstable, perpetually drunk and unable to function in society.

Sadly, this was all too true for Kerouac, who deteriorated quickly and essentially drank himself to death, with the end coming in 1969, not much more than a decade after On the Road was published.

In summary, Jack Kerouac was a leading figure of the Beat Generation. His most notable novel is On the Road, a slightly fictionalized retelling of his cross-country road trips with his friend and fellow Beat Neal Cassady. It features his 'spontaneous prose' style, in which he pours the words onto the page at a furious pace and with little editing. Kerouac's other major works include The Dharma Bums, Book of Dreams and Big Sur.

Finishing this lesson might result in your ability to:

Jack Kerouac: On the Road and Other Works
Related Study Materials

I Have A Dream Speech: Summary & Analysis

The Significance of the Frontier in American History by Turner: Summary

Naturalism in Literature: Authors and Characteristics