The theme of James Fenimore Cooper's The Last of Mohicans is the interracial relation between the European whites and the American Indians. Learn more about the author, the novel's summary, and the analysis of race relations on a grand level and personal level. Updated: 09/18/2021
Create an account

James Fenimore Cooper was one of the most popular early American novelists. He was known for writing adventure novels. He was born in New Jersey in 1789 and raised on the New York frontier, where he set most of his stories.

One day, Cooper was reading a popular novel out loud to his wife when he became angry at what he saw as its bad storytelling. He tossed the book aside and said to her, 'I could write you a better novel!' Thus began one of the most successful careers of that era. In fact, throughout most of his career, he was one of the most popular writers in the English language.

Cooper's most famous novel, The Last of the Mohicans features a main character who recurs in five of his novels, Natty Bumppo, who is also known as Hawkeye. The five novels about Hawkeye's adventures in the wilderness of New York are collectively known as the Leatherstocking Tales. Let's look closer at The Last of the Mohicans and its influence on American literature. 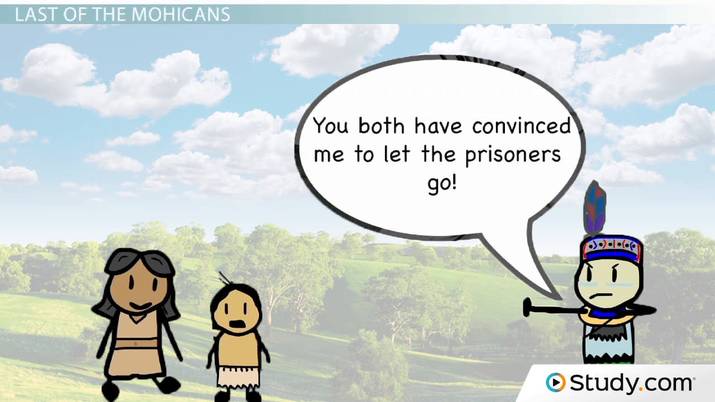 Last of the Mohicans

The Last of the Mohicans takes place during the French and Indian War of the 1750s. During the war, the French and English fought over who would control the colonies, and the French allied themselves with some American Indian nations, sometimes with bloody and disastrous results.

Cora and Alice Munro, daughters of an English colonel, travel through the forest to visit their father. They are escorted by English Major Heyward and led by a Native American guide named Magua, who is from the Huron tribe. As they travel through the forest, they encounter the white wilderness hero Natty Bumppo, or Hawkeye, and his two companions, Chingachgook and his son, Uncas, who are the last surviving members of the Mohican tribe.

Hawkeye quickly realizes that Magua is leading Cora, Alice, and Heyward towards a trap. He and the Mohicans try to capture Magua, but he escapes. Early the next morning, Magua and his friends attack the group and take Cora, Alice, and Heyward captive. Magua reveals that he hates the girls' father because Colonel Munro had once humiliated Magua. However, he agrees to set Alice free if Cora will marry him. Cora refuses, in part because she has feelings for Uncas.

Hawkeye, Chingachgook, and Uncas track Magua's party down and kill all of Magua's friends. Once again, though, Magua himself escapes. Hawkeye and his friends help Cora, Alice, and Heyward finish their journey to the fort where Colonel Munro and his men are in a siege with the French army. The girls reunite with their father. Heyward reveals to Colonel Munro that he wants to marry Alice.

The English retreat from the fort, surrendering to the French. As they leave, though, the Indian allies of the French slaughter the English soldiers. Magua returns and takes Cora and Alice captive again. A few days later, Hawkeye, Heyward, Chingachgook, and Uncas find Magua's trail and set off to rescue the women.

Cora and Alice have been taken to two different camps. Using the disguise of a French healer, the men rescue Alice. Magua and the rest of the Hurons are humiliated and vow revenge. They go to the village where Cora is being held. Uncas, Hawkeye, and the others also show up there. Uncas and Cora, in separate interactions, convince the chief of the village to let Magua's prisoners go. However, he refuses to let Cora go, as she belongs to Magua.

Magua takes Cora into the wilderness, with Uncas, Hawkeye, and the others hot on the trail. They catch up to Magua and defeat him and the rest of the Hurons. However, one of the Hurons stabs Cora and kills her. Uncas tries to avenge her death, but as he fights Cora's killer, Magua stabs him in the back and kills him. Magua attempts to escape by jumping over a ravine, but misses and ends up clinging to a shrub on the other side. Hawkeye shoots him, and Magua falls to his death. Uncas and Cora are given proper burials, and Chingachgook mourns the loss of his son, who was the last of the Mohicans.

But on a personal level, friendships between Europeans and Indians work out better. Hawkeye's close relationship with the Mohicans is a driving factor in the plot and acts as a source of strength for all of them. Hawkeye becomes a big brother figure to Uncas, which allows Uncas to develop into a heroic warrior who is able to proudly represent his people and create a legacy. Likewise, Hawkeye's bravery is augmented by his friendship with Uncas. Through this relationship, Cooper comments on the way relations between the races are important and beneficial for all sides.

Cooper's exploration of the hazards of frontier life and the complex relationships between races remains an important theme in American literature. Later writers, inspired by The Last of the Mohicans and his other books, often turned to the same areas of race and frontier life in subsequent works. Cooper's mixture of history and fiction, along with contemporaries of his like Sir Walter Scott and Alexandre Dumas, influenced the next generation of writers to dramatize historical episodes and time periods in their writing.

James Fenimore Cooper was a famous American writer whose most famous book, The Last of the Mohicans, followed a group of Indians and English settlers during the French and Indian War. The story explores complex and sometimes dangerous relationships between white European settlers and American Indians. The book's examination of interracial relationships and frontier life, and its mixture of fiction and history, influenced further American writers.

After completion of this lesson, students should be able to:

Characterization in The Great Gatsby

The Adventures of Huckleberry Finn by Mark Twain: Plot & Characters

Irving's The Legend of Sleepy Hollow: Summary and Analysis

Catcher in the Rye by JD Salinger| Summary, Plot & Analysis