In this lesson, learn about the relationship between two important American Founding Fathers, James Madison and Alexander Hamilton. Explore the ways they worked together and highlight the source of their disagreements. Updated: 01/03/2020
Create an account

It's easy to think of America's Founding Fathers as one big group of friends. Think about it: we're accustomed to seeing portrayals of the Founders hanging out together, signing the Declaration of Independence, and working together to build the American Republic. It's true that America's Founders collaborated with one another extensively and many were even close friends. However, we also need to understand that they were not the homogeneous group of ''BFFs'' that we sometimes imagine.

Although united by their republicanism, bitter rivalries and intense political disagreements were characteristic of many of their relationships. One Founder even shot and killed another. That's right: Vice President Aaron Burr killed Alexander Hamilton in a pistol duel. George Washington and Thomas Jefferson had a rocky relationship later in their lives, as did John Adams and Jefferson (although they reconciled before their deaths). The Founders, as a whole, were more ''frenemies'' that ''BFFs.'' In this lesson, we will explore the relationship between two Founders who held very different ideas: James Madison and Alexander Hamilton. Let's dig in! 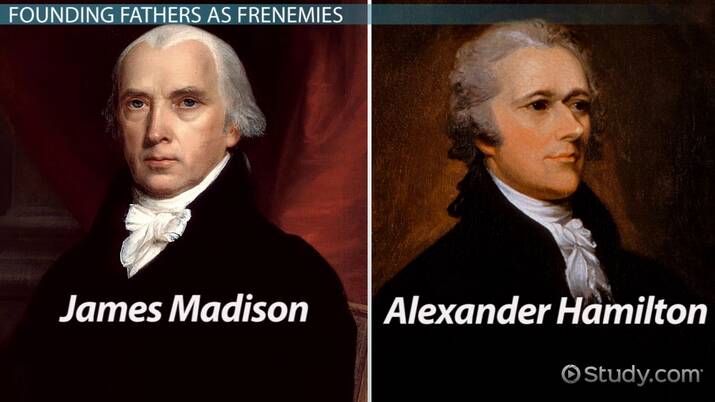 Coming up next: James Madison & Slavery

The key to understanding the disagreements between Madison and Hamilton lies in their political allegiances. James Madison had begun his political career as more or less a Federalist, but in 1791, he broke away and joined the Democratic-Republican Party. Alexander Hamilton was a staunch Federalist. But what do these terms even mean? Let's explore.

The Federalist Party supported a strong, centralized government and a national bank, and often tended to favor a close relationship with Great Britain. While George Washington did not officially belong to any party, his policies reflected more of a Federalist approach. John Adams, his vice president and the second president of the United States, was a staunch Federalist. In opposition to Federalism, Thomas Jefferson founded the Democratic-Republican Party. The Democratic-Republicans favored a weak federal government and believed, instead, that power should be concentrated at the state and local levels. They were skeptical of a national bank, believing it was an overreach of government (and possibly unconstitutional). They also tended to be hostile toward Great Britain. Many (notably, Thomas Jefferson), in fact, favored close relationships with France instead.

There was a time, however, when Madison and Hamilton worked closely together in a spirit of cooperation. They were both ardent nationalists who wanted to see the U.S. grow strong. The two men served together in the Congress of Confederation in the 1780s. Both Madison and Hamilton supported Robert Morris, who was America's Superintendent of Finance between 1781-1784. This position was basically the precursor to the position of Secretary of the Treasury. Morris was responsible for financing the American Revolution and helping the new American Republic establish financial security.

Both Madison and Hamilton supported the new U.S. Constitution, which was ratified in 1788. In fact, both men contributed to the Federalist Papers, which was a collection of 85 essays arguing in favor of the U.S. Constitution. Published originally under the pseudonym ''Publius'' in local newspapers, the Federalist Papers had a profound influence on politics during this time.

However, as economic and political issues became more complex, the two men began to find themselves drifting apart. A close friend and ally of George Washington, Alexander Hamilton emerged as a leader in the Federalist Party. He served as the first Secretary of the Treasury under Washington from 1789-1795. Hamilton believed the federal government should take on the debt of the individual states and be strongly involved in regulating the economy. To this end, he worked to establish a national bank, officially called the First Bank of the United States. The bank was authorized to receive a 20-year charter in 1791.

Personality may also have played a factor in the estranged relationship between Madison and Hamilton. Hamilton was aggressive, ambitious, and blunt, whereas Madison tended to be quieter and more reserved. The rivalry between the two men never reached the extreme level that it did between Burr and Hamilton, or even between John Adams and Thomas Jefferson before they reconciled.

Madison and Hamilton had fundamental political disagreements over the role of the federal government (specifically regarding economic matters), with each man acting according to what he believed was best for America. These two men demonstrate to us that not all the Founding Fathers agreed on everything, and that often rivalry and tension existed between them.

Let's briefly review what we've learned in this lesson about the Founding Fathers and their ''frenemy-esque'' relationships, thanks to the different views held by many of them about the direction the new United States needed to take.

Robert Morris was America's Superintendent of Finance between 1781-1784. He was supported by both Madison and Hamilton. The Federalist Papers was a collection of 85 essays arguing in favor of the U.S. Constitution. Published originally under the pseudonym ''Publius'' in local newspapers, many of the essays were written by Madison and Hamilton. Alexander Hamilton played an instrumental role in creating the First Bank of the United States, which was chartered in 1791.

Which political party did James Madison belong to following 1791?

The Treaty of Ghent: Summary & Significance

Impact of the New Deal on African Americans

Wyrd in Beowulf: Overview & Theme | What is Wyrd?

Hamilton and the Federalists vs. Jefferson and the Republicans

The Presidential Policies of Andrew Jackson

The Puritans and the Founding of the New England Colonies