Jay's Treaty was an agreement between the U.S. and Great Britain that kept the peace between those two countries in 1794. Come learn about the treaty, what problems it solved and why President Washington enforced it even though it wasn't popular. Updated: 12/14/2021
Create an account

What Was Jay's Treaty?

You've just played a soccer match against your toughest rivals. They played unfairly, but your team still won. Afterward, you line up and shake hands because you're all good sportsmen. But even though you shake hands with the other team, you still won't trust them the next time you play.

Jay's Treaty was an agreement made in 1794 between the U.S. and Great Britain that settled some of these problems and kept the peace. 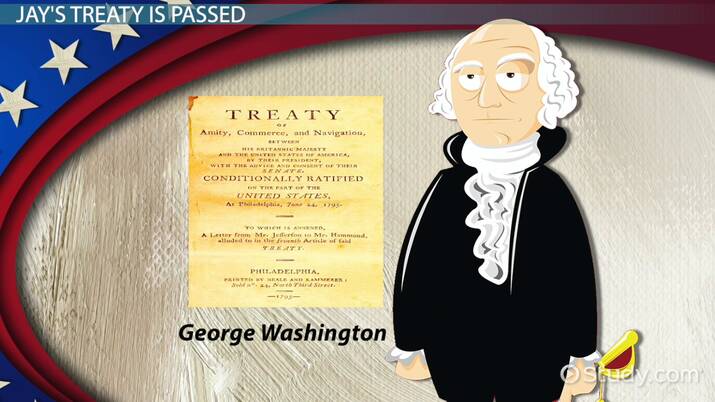 Coming up next: States Rights Lesson for Kids

When you watch sports on TV, you might root for one team while your friend roots for the other team. After the Revolutionary War ended, Great Britain was still at war, this time with France. Some people in the U.S. were on France's side, and some were on Great Britain's side.

In order to keep the U.S. out of that war and other fighting in Europe, President Washington sent John Jay, the first Chief Justice of the Supreme Court, to England. It was his job to get both the U.S. and Great Britain to settle their disagreements with a treaty.

To accomplish this, though, John Jay would have to work hard to negotiate. Have you ever negotiated with one of your siblings or friends? Maybe you wanted them to do chores for you, and in exchange you offered up their favorite candy. John Jay didn't have anything like candy to offer during his negotiation, though. He didn't have much of anything that would convince Great Britain to give the U.S. what it wanted in the treaty.

Because Jay didn't have a lot to bargain with after that, Jay's Treaty was great for the British but wasn't much of a deal for the United States. But it did let the U.S. sell more goods in some parts of Great Britain. The British also agreed to leave the northern forts, which they were supposed to do anyway.

Great Britain could still take goods and supplies off U.S. ships if they were going to France as long as they paid for them. They could also take goods off U.S. ships without paying for them if they came from France. Other issues were settled during later discussions.

Almost no one in the U.S. liked the treaty, but the Senate still passed it in 1795, though just barely. President Washington didn't want to go back to war with Great Britain, so he put Jay's Treaty into effect. He knew it gave the U.S. time to prepare, reorganize, and get weapons together in case the U.S. and Great Britain eventually had another war.

Jay's Treaty was an agreement made between John Jay, the first Chief Justice of the Supreme Court who represented the U.S., and Great Britain. It was supposed to solve problems like the British still hanging out in northern U.S. forts, not letting the U.S. sell goods in Great Britain and taking goods off American ships. Jay didn't have much to bargain with, especially after Alexander Hamilton, Secretary of the Treasury, went behind his back and told the British that the U.S. wasn't going to use force to protect their ships, but the unpopular treaty was still passed, and it solved some of the problems and kept the peace.

James Madison's Presidency: the War of 1812 & the Monroe Doctrine

The Bill of Rights Lesson for Kids: Definition & Summary