Cognitive psychologist Jerome Bruner felt the goal of education should be intellectual development, as opposed to rote memorization of facts.

This lesson will discuss Bruner's theory of development and his three modes of representation. We will also explore his beliefs on learning, language, and discovery and differentiate his views from those of Jean Piaget.

Bruner held the following beliefs regarding learning and education: 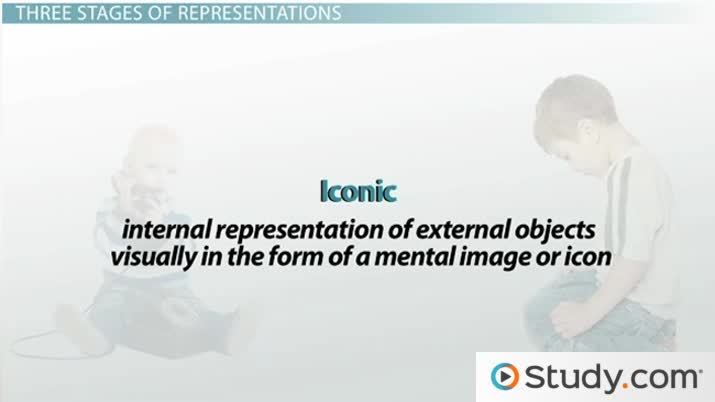 Coming up next: Robbie Case's Theory of Development: Neo-Piagetian Perspective

The enactive stage appears first. This stage involves the encoding and storage of information. There is a direct manipulation of objects without any internal representation of the objects.

For example, a baby shakes a rattle and hears a noise. The baby has directly manipulated the rattle and the outcome was a pleasurable sound. In the future, the baby may shake his hand, even if there is no rattle, expecting his hand to produce the rattling sounds. The baby does not have an internal representation of the rattle and, therefore, does not understand that it needs the rattle in order to produce the sound.

The symbolic stage, from seven years and up, is when information is stored in the form of a code or symbol such as language. Each symbol has a fixed relation to something it represents. For example, the word 'dog' is a symbolic representation for a single class of animal. Symbols, unlike mental images or memorized actions, can be classified and organized. In this stage, most information is stored as words, mathematical symbols, or in other symbol systems.

Bruner believed that all learning occurs through the stages we just discussed. Bruner also believed that learning should begin with direct manipulation of objects. For example, in math education, Bruner promoted the use of algebra tiles, coins, and other items that could be manipulated.

After a learner has the opportunity to directly manipulate the objects, they should be encouraged to construct visual representations, such as drawing a shape or a diagram.

Finally, a learner understands the symbols associated with what they represent. For example, a student in math understands that the plus sign ( + ) means to add two numbers together and the minus sign ( - ) means to subtract.

The concept of discovery learning implies that a learner constructs his or her own knowledge for themselves by discovering as opposed to being told about something.

According to Bruner, the teacher should facilitate the learning process by developing lessons that provide the learner with information they need without organizing it for them.

This idea of discovery learning is often referred to as constructivism, which emphasizes the active role of the learner in building understanding and making sense of information.

Bruner wasn't the only cognitive psychologist with ideas about learning. Jean Piaget and Bruner held common beliefs about learning, but disagreed on several points.

Bruner and Piaget disagreed on the following:

Bruner felt the teacher should encourage discovery learning by allowing the student to construct knowledge for him or herself. The role of instruction was to guide and provide enough information for understanding, but not too much that would stifle the child's own construction of knowledge.

Bruner and Jean Piaget agreed on several components of learning, including the fact that children are born as ready and active learners. They disagreed, however, on several critical components of learning. Bruner believed development does not consist of discrete stages but is a continuous process. He also believed language is a cause and not a consequence of learning. He believed that more knowledgeable people play a major role in the cognitive development of a learner and that you could speed-up the learning process.

For this activity, imagine that you are a teacher of a third grade class. At a parent-teacher conference, a parent comes up to you and strongly opines that you should be giving the children lots of worksheets. Write a paragraph describing what you would say to the parent about how your teaching strategies are based on Bruner's philosophy, how you are applying his theory as a teacher, and why worksheets may not be the ideal learning strategy for third graders.

In this lesson you read that Bruner believed that a person could "speed up" cognitive development in a child. Design an intervention for children in the iconic stage (ages 1-6) where visual imagery is the dominant form of representation. The aim of this intervention is to accelerate learning and increase cognitive development. How would you use imagery to help the children acquire knowledge? (You may break your intervention down by ages, since the age range is quite large.)

Bruner emphasized the importance of culture in terms of cognitive development. He advocated discovery learning wherein a child constructs his or her own knowledge through discovery. How do you think that culture affects this process? How might a child from one culture make discoveries that are different from a child in another culture? Write a journal entry discussing your thoughts on this issue. To take it one step further, do some research on a culture that is not your own. Did that additional research give you insight into how culture could influence discovery learning? Add your insights to your journal entry.

Behavioral Theory: Thorndike and the Law of Effect

How to Create a Mathematically Rich Learning Environment