Mary Firestone has a Bachelor of Arts in Music and a Master of Fine Arts in Creative Writing. Firestone has experience as an instructor for English, English Composition, Advanced Composition, Contemporary World Literature, Contemporary Literature, and Creative Writing. She has taught at a variety of schools such as Ottawa University Online, Rasmussen College, Excelsior College, and Southern New Hampshire University.

Learn about jigsaw activities, and how they're used in the classroom. Find out how to apply jigsaw activities to your lessons. Review the lesson then take a quiz to test your knowledge.
Create an account

We tend to think of learning something as starting from the beginning and going all the way to the end by ourselves, but learning in groups is another way to learn just as effectively.

A jigsaw activity is a cooperative learning technique where students work in groups to teach each other something. The groups are given an overall assignment, and each student in each group becomes an 'expert' on a smaller part of it. When each student has taught what he/she knows to another group member, they have together learned the overall assignment and completed the jigsaw (similar to a puzzle).

The jigsaw method was developed by psychologist Elliot Aronson in the 1970s. Studies have shown that this method '...reduces racial conflict among school children, promotes better learning, improves student motivation, and increases enjoyment of the learning experience' (www.jigsaw.org). Jigsaws are a common way to implement cooperative learning in the classroom. 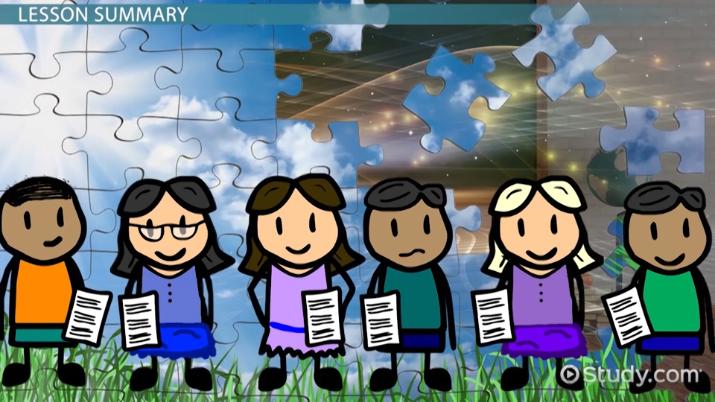 The jigsaw method can be applied to nearly any topic, provided that students have received enough instruction and have access to the materials they need for developing their 'expert' role in the group.

The general steps are as follows:

Let's say you're teaching a unit on American presidents of the 20th century, and are focusing on President John F. Kennedy. Your jigsaw might proceed as follows:

Encourage members of each group to take notes and ask questions about anything they don't understand of each expert. Remind them that they will eventually be given a quiz on the material.

Teachers should remain in the classroom circulating among the groups to make sure students are on task. They should intervene when one student is dominating the group without being checked by the group leader.

A jigsaw activity is when students learn specific aspects of a lesson, and then teach each other what they learned, putting together the overall concept. Students are broken up into groups, each member of the group is assigned a portion of a topic or concept, allowed to research and discuss with other members of the same topic portion, and then come back to their original groups to put all the information together.

How to Manage a Differentiated Classroom

Cooperative and Collaborative Learning in the Classroom

How to Teach Math Vocabulary

What Is Scaffolding Instruction?