Copyright
Lesson Transcript
Instructor: David White
Through this lesson you will learn what defines jingoism, and come to understand how this political philosophy has influenced military actions and global relations. Updated: 11/06/2022
Create an account

In 2014, the United States, along with other Western nations, engaged in a bitter debate over the attempts of Russian separatists to annex a portion of Crimea. Some politicians suggest imposing greater sanctions that would stop the conflict, while others would prefer a military-style intervention. The latter of these options has received considerable criticism for being what many consider to be an expression of jingoism.

Jingoism is a term used to describe a political perspective that advocates the use of threats or military force in foreign relations, as opposed to finding a peaceful or diplomatic solution. Jingoism often contains strong elements of nationalism and moral superiority and is often present in fiercely patriotic rhetoric.

The word jingoism is derived from the 19th-century European slang term ''jingo,'' which is an exclamation used to avoid saying ''by God'' or ''by Jesus.'' The popular theory is that it was first coined in a British folk song from 1878, used to inspire patriotism. In the years that followed, the term jingoism became a popular way of describing people who were aggressively patriotic or who embodied the sentiment of that song. 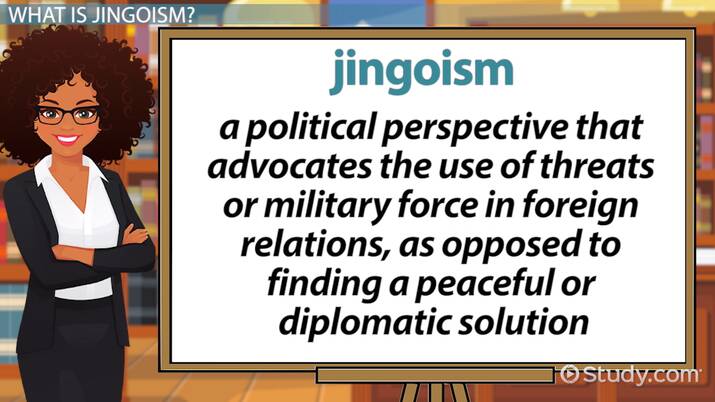 Examples of Jingoism in History

Jingoism may seem like a straightforward concept, but in practice, it can become very complicated or controversial. Because jingoism is often spoken of as being a harmful point of view, but can at times seem rational, it may be useful to explore some other examples of jingoism from history.

Take, for example, the United States' ongoing conflicts with Native peoples throughout the 19th century, formally known as the Indian Wars. The government frequently used patriotism, nationalism, and racism to justify the relocation and violent oppression of Native tribes across the nation. In order to justify territorial expansion by military force, the federal government took the position that Indians were a threat to American greatness, and their resistance should be met with swift force in order to deal with the problem.

During the Cold War (c. 1947-1991), both sides of the conflict frequently relied on jingoist rhetoric to bolster support. From the perspective of the United States and its allies, democracy and Western values were the only way to move forward as a global community, thereby implying that any other type of government was in some way inferior. The USSR, on the other hand, continued their attempt to spread communism throughout eastern Europe. Though it never reached the point of war, both sides were attempting to portray themselves as superior to the other, which would justify imposing their beliefs on another country or culture. It was, in short, very jingoistic.

The previous examples demonstrate how jingoism has affected people in the past, but as a political ideology, it remains a powerful tool in the present day.

For example, in the wake of the World Trade Center attacks on September 11, 2001, President George Bush gave a speech that many consider to be jingoist. In his speech, Bush extolled the virtues of the United States and vowed that those responsible would be found and brought to justice. In the weeks that followed, the US launched attacks on Afghanistan initiating what has become known as the War on Terror. Because Bush's speech was undeniably patriotic and nationalistic and was followed by an aggressive military invasion of a foreign country, this example can be considered a demonstration of jingoism.

Another good example of ongoing jingoism is in North Korea, whose national motto is ''Powerful and Prosperous Nation.'' For decades, North Korea has been under what many consider to be a dictatorship that keeps a tight control of its people by limiting the types of media and foreign influence that they get exposed to. Because most of their media is designed to glorify the nation and its Supreme Leader, the majority of North Koreans are raised to believe that the nation is superior to others around the world, who are often portrayed as being a threat to the North Korean people.

As a concept, jingoism is simply defined as an overtly patriotic or nationalistic perspective that favors the use of military force in situations where a foreign threat is perceived. In practice, however, it can be much more difficult to spot. Because the term is often used in highly emotional or passionately debated scenarios, it can sometimes seem an entirely reasonable position.

Despite seeming reasonable in certain situations, the criticisms of jingoism are valid. A jingoist perspective favors skipping over any diplomatic or peaceful solutions and instead demands that military action be used to eliminate a threat from people that are believed to be inferior. Historically, this perspective has led to a dehumanization of other races and ethnicities, which makes it easy to justify the violence and devastation that accompany aggressive military actions.