Making a living can be a major endeavor! Watch this lesson to find out more about work in middle adulthood. We'll cover the topics of career and job changes, age discrimination and unemployment and their effect on middle age.
Create an account

Bobby is 50, and he's facing some big changes. At work, he's a powerful executive and gets paid a lot of money. But recently, he's begun to ask himself if he's happy at work. Suddenly, a big salary doesn't seem as nice as it did when he was younger. He thinks he'd be happier doing something completely different.

Bobby is in middle adulthood, also known as middle age, which is the time of life between age 40 and age 65. During this time, people move from early adulthood, when they're just starting a career and family, towards older adulthood, when most people are retired. 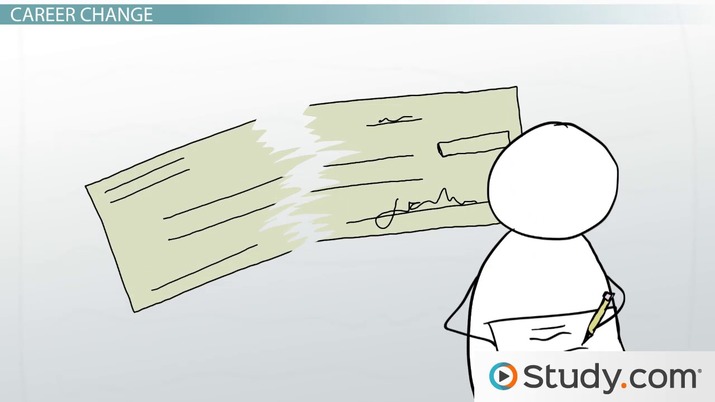 Bobby has been thinking about making a change. He thinks that, instead of being an executive at a big company, he might like to try his hand as a journalist, writing stories for magazines and news agencies.

Bobby is not alone in considering a career change, or movement from one career to another. Some experts estimate that most Americans will have five to seven different careers during their lifetime! And that doesn't include job change, which just involves moving from one job to another within the same career path.

For example, if Bobby were to change companies and be an executive at a different company, that would just be a job change. But because he wants to completely change what he does, he's looking at a career change.

For example, many people in middle adulthood are making more money than they ever have and probably more than they ever will in their lifetime. Take Bobby, for example. During his 20s and 30s, he was busy trying to move up the corporate ladder. With all of his promotions and raises, he's finally making the big bucks.

At the same time that they are making more money than ever before, though, many people in middle age also have more responsibilities than ever before. Bobby has a mortgage, payments to a nursing home for his mom and college expenses for his two kids. He has to make a lot of money to pay for all those expenses.

But making a career change often requires taking a pay cut. As a writer, Bobby might be happier but chances are that he won't be making nearly as much money as he does as an executive.

For this reason, many mid-life career changes are shifts into related fields. For example, Bobby might look for a job that allows him to combine his experience in business with his passion for writing.

Another aspect of both career changes and jobs in general that is unique to middle adulthood is the concept of age discrimination, or treating someone less favorably due to the fact that they are older.

Let's say that Bobby decides to go ahead and make the move to being a writer. As he interviews for jobs, though, he discovers something. The jobs are going to people who are younger than he is. He's experiencing age discrimination.

Age discrimination is illegal in the United States, but it is very hard to prove that it's happening. For example, if Bobby claims that a company didn't hire him as a writer because of his age, they might claim that they were looking for someone who had more writing experience or that they hired the younger person because he was a better writer than Bobby.

Bearing in mind that Bobby might have to take a pay cut and he might face age discrimination, you might be thinking that maybe it's better for Bobby to stay where he is or for him to look for a new job while he's still in his current job.

While this might be possible for Bobby, for some people in middle adulthood, it's not possible. That's because often unemployment causes people to have to change jobs (and sometimes careers) whether they like it or not.

Like career changes, unemployment (or being without a job) is not unique to middle age but does have some aspects that are different in middle age than at other times. For example, some studies have shown that middle-aged unemployed persons have more physical and psychological issues than unemployed people in early adulthood.

Not only that, but age discrimination can play a role here, too. If Bobby's company decides to downsize, they might choose to let him go but keep on people in their 20s and 30s. Again, this is illegal but hard to prove.

Middle adulthood is the time of life between ages 40 and 65. During this time, people are often making more money than they have ever made before, which leads to a lower rate of career change, though some people still make a career move at that point. When they do, they risk facing age discrimination. Some people end up changing jobs or careers due to unemployment, which can have a serious physical and psychological impact on a person in middle age.

Social Development of Adults: Self Concept