Johannes Gutenberg (1400-1468) was a German blacksmith and inventor who created the mechanical printing press and moveable type. Learn more about the facts about Gutenberg's life and accomplishments, and discover the many ways his invention changed the world. Updated: 09/17/2021
Create an account

Who Is Johannes Gutenberg?

Johannes Gutenberg was a German blacksmith known for inventing the mechanical movable type printing press. His printing press has been widely considered the most important invention of the modern era because it profoundly impacted the transmission of knowledge. Invented around 1439, Gutenberg's movable type printing press initiated nothing less than a revolution in print technology. His press allowed manuscripts to be mass-produced at relatively affordable costs. The 42-line 'Gutenberg Bible', printed around 1455, was Gutenberg's most well known printed item. It is considered by many to be the first 'modern' printed book. 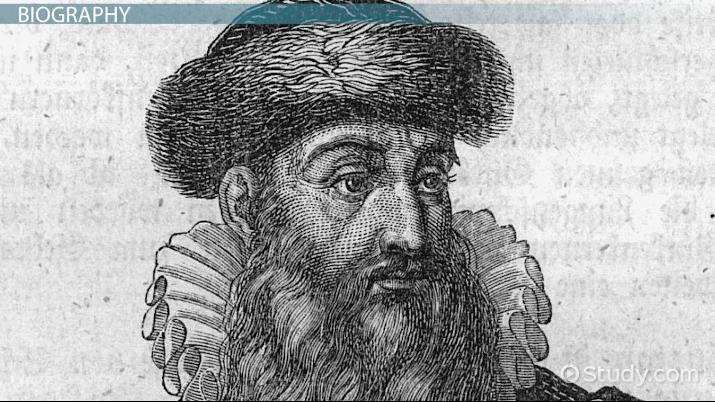 Try it now
Back
Coming up next: Cuneiform Writing: Definition, Symbols & History

There is much historians do not know about Johannes Gutenberg. He was born in Mainz, Germany sometime around 1400. It is believed he grew up learning the goldsmith and/or blacksmith trade, but again, the specifics are not known. For political reasons, the Gutenberg family left Mainz (probably during the late 1420s), and eventually relocated to Strasbourg. It is believed by some historians that Gutenberg attended the University of Erfurt. Legal documents seem to indicate that in around 1437 Gutenberg was involved in a broken engagement with a young lady from Strasbourg.

Gutenberg was skilled in metalworking. For a short time, he was involved in producing special mirrors that were supposedly designed to capture 'holy light' shining from religious relics. These mirrors were typically sold to pilgrims making journeys to holy sites. This endeavor proved unfruitful, however, and Gutenberg turned his attention toward other types of inventions. He began taking out loans to build printing presses. These were modeled after screw-type wine presses. He began experimenting with typeface, and by the late 1430s, had perfected a printing machine that made use of movable typeface.

Fust went on to open his own print shop, but gave no credit to Gutenberg for the technology used in printing. For most of his life, Gutenberg was not given proper recognition for his invention. In fact, it is believed that no portraits of Gutenberg were done during his lifetime. The engravings and other imagery depicting him were most likely done years after his death. Gutenberg died in 1468 and was buried in Mainz. The cemetery where he was buried was later destroyed, and his grave is now lost. It was not until after his death that Gutenberg's contributions to print technology were fully realized.

Historians are still learning about the life of Johannes Gutenberg. It is commonly believed that he did not have a wife or children.

The Importance of the Printing Press

Before the invention of the movable type printing press, manuscripts were produced in a variety of primitive and time-consuming methods. Handwritten manuscripts and primitive woodblock print were the most common forms of early medieval print methods. These techniques were extremely laborious and expensive. Gutenberg developed a printing press based on the design of screw-type wine presses. Metal block type could be arranged as desired and then was coated with ink. A hand lever then pressed the typeface onto paper. The typeface could then be 'moved,' or rearranged, as desired.

It is not known exactly when the movable type printing press was invented. It appears to have been invented around 1439 or 1440. Gutenberg's invention was profoundly important. It launched a revolution in printing. It allowed manuscripts and books to be mass-produced cheaply. It eventually helped increase literacy throughout Europe because more people had access to literature. This was particularly true among the lower classes who typically did not have as much access to print material.

Gutenberg's invention also helped break up the unofficial monopoly the upper class held over the transmission of knowledge. As a result, in the coming centuries, democratic ideas were able to spread throughout Europe. The Renaissance, Enlightenment, and Scientific Revolution were able to impact so many people precisely because of Gutenberg's printing press. With a few minor modifications over time, the model he invented was used for hundreds of years.

Did He Really Invent the Printing Press?

It should be noted that Gutenberg did not invent the printing press per se, but rather is credited with inventing the moveable type printing press. Recent scholarship has shown that the Chinese had developed advanced printing presses hundreds of years before Gutenberg. Historians continue to debate how much of Gutenberg's print technology was original, although the general consensus is that it was.

Johannes Gutenberg was a German blacksmith and inventor known for developing the first mechanical moveable type printing press. Gutenberg was born in Mainz, Germany, around 1400. His printing press is one of the most important inventions of human history and widely considered the most important invention of the modern era. It was so important because it allowed manuscripts and books to be mass-produced at affordable costs, thereby leading to a revolution in print technology.

Gutenberg's invention had a monumental impact on the transmission of knowledge. The 'Gutenberg Bible,' printed around 1455, was Gutenberg's most famous printed item and is widely regarded as the world's first 'modern' printed book. Gutenberg died in 1468 without receiving much acclaim for his invention.

When you are done with this lesson, you should be ready to:

The Impact of Printmaking on 19th-Century Art

Prepress Process, Equipment & Importance | What is Prepress in Printing?