John Cabot is considered one of the first explorers of the New World and helped the British in many ways. Learn more facts about the life of John Cabot, voyages he embarked on, and his accomplishments in exploration. Updated: 09/08/2021
Create an account

John Cabot, or Giovanni Caboto, was an Italian born navigator who explored the coast of Newfoundland for the English in 1497. Cabot has historically been credited with being the first European to land in North America since the Vikings. Although some historians now believe that Cabot did not actually land in North America, he did establish the British claim to the New World.

Cabot spent most of his life in Italy; however, in 1495, Cabot and his family moved to England. The voyage of Christopher Columbus in 1492 was inspiring to sailors like Cabot, both because of its novelty and the monetary benefits possible from new trade routes. At the request of King Henry VII, Cabot and his son, Sebastian, sailed a small ship called the 'Matthew' towards the Canadian coast. 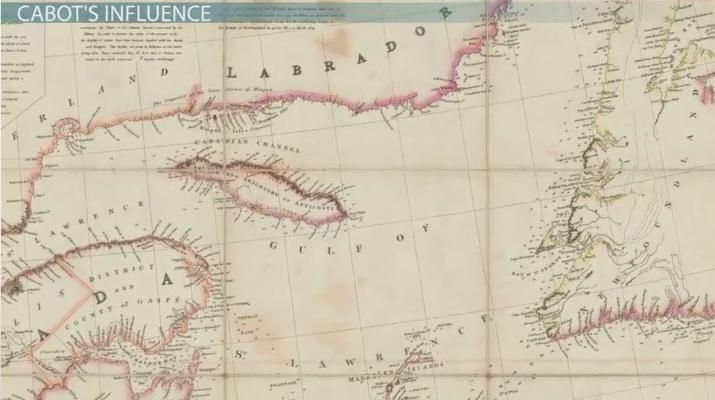 Try it now
Back
Coming up next: John Rolfe: Marriage to Pocahontas & Timeline

Voyage of the Matthew

Cabot and his son landed on June 24, 1497 in either Labrador, Newfoundland, or on Cape Breton Island and claimed the land for England. From there, Cabot explored the Canadian coastline and gave names to many of the islands and capes he found. Cabot didn't find the water passage he was seeking and eventually had to return to England for supplies.

Some sources indicate that Cabot was not aware of the true extent of his journey and believed that he had found both the Northwest Passage and that the land he had claimed was part of Asia. The lack of accurate geographic knowledge made it very difficult for early explorers, like John Cabot, to understand where they had actually landed.

In 1498, Cabot attempted another voyage to the New World, this time with four ships. Until recently, many historians believed that only one of Cabot's four ships had successfully returned; however, new evidence suggests that Cabot and most of his men returned to England in 1500.

The ship that returned early appears to have encountered mechanical issues and returned to port; however, the other three ships continued on their voyage and explored more of the Canadian coastline. It is possible that a small group of priests were part of the expedition, and some historians think they may have established a small religious settlement in Canada, one of the first in the New World.

Cabot's influence also extended to his son Sebastian, who became an explorer for the British in 1508. Like his father, Sebastian also sought the Northwest Passage. Later in 1526, the Spanish sponsored an attempt by Sebastian to sail around the world, although he only made it to Argentina.

Through their exploration of the seas and coastlines, the Cabots contributed to the settling of the New World by European colonists. Today there is a water route from the Atlantic Ocean to the Pacific Ocean, though it's manmade: it's called the Panama Canal. However, the real Northwest Passage was created by the melting of icebergs because of global warming.

John Cabot, aka Giovanni Caboto, was an Italian born navigator who explored the coast of Newfoundland for the English in 1497. Although he has been credited with being the first European to land in North America since the Vikings, some historians now believe that Cabot did not actually land in North America. He did, however, establish the British claim to the New World.

On his first voyage, Cabot attempted to find the Northwest Passage, which was believed to be a water route connecting the Atlantic to the Pacific Ocean. He landed in either Newfoundland or Cape Breton Island and explored the Canadian coastline.

During his second voyage, a group of priests may have established a small religious settlement. His son, Sebastian, also became an explorer and made it to Argentina. Like his father, he was seeking the mythical Northwest Passage. John Cabot's exploration contributed to the British settlement of the New World.

Ferdinand Magellan Accomplishments, Facts & Timeline | What was Magellan Known for?

The Impact of European Exploration & Colonization on Canada

Spreading Religion in the Age of Exploration