John Gower was a medieval Englishman who wrote poetry about religion, romance, and corruption. Explore the biography and works of Gower and learn about who he was, the John Gower Society, and his three poems called Mirour de l'Omme, Vox Clamantis, and Confessio Amantis. Updated: 09/14/2021
Create an account

Who Was John Gower?

John Gower, who lived from 1330 to 1408, was a medieval English poet and seminal figure of the Middle English verse tradition. He was also a good friend of Geoffrey Chaucer, author of The Canterbury Tales. Chaucer respected and admired Gower and his work so much that he gave him a medieval version of a modern day shout out in his poem Troilus and Criseyde, which he dedicated in part to 'moral Gower.'

Details about Gower's life are a bit murky. However, we do know that he was born into a wealthy or middle class land-owning family from Yorkshire or Kent and that he probably practiced law. Gower wrote his poetry primarily in the allegory mode; however, some literary critics describe his work as plain. So even though Gower is considered one of the fathers of English poetry, after about the 16th century his work was not as popular as his fellow contemporaries.

However, there was a revival in the interest of Gower's poetry in the middle part of the 20th century, largely in part due to C.S. Lewis' mention of his work in The Allegory of Love: A Study in Medieval Tradition published in 1936. This resurgence has sparked a modern-day interest with both scholars and students alike, many of whom now consider his work extremely significant to the development of English poetry. 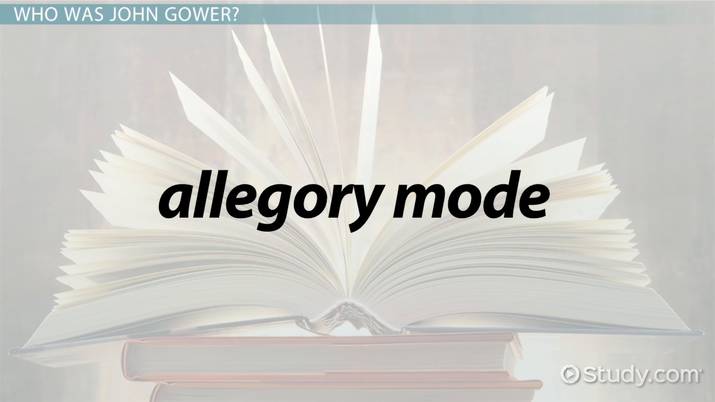 Gower's poetry was considered moral, political, historical and religious. The first group of compositions from his youth was most likely ballades and carols. Yet, no works from this initial period are around today. His three most popular poems were: Mirour de l'Omme, Vox Clamantis, and Confessio Amantis. The poems were written in either French, Latin, or English.

Let's first take a look at Mirour de l'Omme, which translate to 'Mirror of Man' and is considered Gower's first major piece of poetry. It was written around 1376, and begins the initial period of Gower's literary career. The allegorical poem was written in French and comments on married life, the fall of man, and what effects that sin may have on the world. Gower later Latinized the poem's name to Speculum Hominis and then later changed the name again to Speculum Meditantis. It is said that he changed the name the second time in order to fit in with the titles of his other works.

His second piece of work, Vox Clamantis, translates as 'The Clamoring Voice' in Latin. Once again, Gower addresses sin in his poetry; however, this time he also criticizes what he felt were corrupt politicians. The poem provides details of the Peasants Revolt of 1381, an uprising of local London workers who fought against war taxation. Gower pulls no punches in the work and attacks the amoral government structure that ultimately led to the revolt of the people. Vox Clamantis was an extremely regaled poem, especially by other artists of the day. This piece is what allegedly led Chaucer to give Gower the nickname 'moral Gower.'

Finally, we have Confessio Amantis. Gower wrote his most acclaimed poem in English at the request of Richard II, who was worried that there wasn't enough literature written in the language. Confessio Amantis, or in other words 'Lover's Confession' was started in 1386 but was probably not completed until around 1390. The story is structured in a frame narrative with a prologue and eight books. The setup for the secondary tales involves an older man making confessions about his love life to the chaplain of Venus. The result is a collection of love stories. Some of the narratives have counterparts in Canterbury Tales and one of the stories also served as a source material for William Shakespeare's play Pericles. Confessio Amantis is considered one of the most acclaimed works of the 14th century.

Gower's work is studied by colleges and literary enthusiasts from around the world. His online presence is also prominent. There is a group called the John Gower Society which is dedicated entirely to his work. The Society publishes two newsletters a year. Its main objective is to promote and encourage the study of Gower's work on an international level.

John Gower may not have been as popular as some of the contemporaries of his day, however, many of his works are still studied and admired today. This is especially true of Confessio Amantis which is widely considered one of the finest literary works of the 14th century. Other famous poems include Mirour de l'Omme and Vox Clamantis.

A Woman of No Importance by Oscar Wilde: Summary & Characters