After the War of 1812, the United States entered a period known as The Era of Good Feelings. Learn how the War of 1812, as well as the Second Barbary War, helped lead to this period. Understand President James Madison's role in this, including how the period was influenced by Madison's economic policies and his perspective on Native Americans. Explore events at the British fortress occupied by runaway slaves. Updated: 08/16/2021
Create an account

The Era of Good Feelings

Despite enduring a total naval blockade and heavy losses, many Americans felt that the nation had won the War of 1812. General Andrew Jackson's ragtag force of free blacks, pirates and militia defeated the British at the Battle of New Orleans after the Treaty of Ghent was signed, but Americans didn't know that at the time. It certainly appeared that Jackson's heroic victory, on the heels of Britain's failed invasion of Baltimore, had forced the British to surrender. Federalists who had intended to secede New England in protest over the war were thoroughly discredited and their party gone for good from federal politics.

Once America was done fighting the British, it could turn its attention to an old problem: Barbary Pirates. Though Jefferson had trounced them a decade earlier, the American military had been kind of busy during the War of 1812, and this left merchant ships in the Mediterranean vulnerable once again. The pirates were back to their old tricks of capturing cargo and crew, holding them for ransom or selling them into slavery. So when the War of 1812 was over, Madison dispatched the navy back to the North African Coast for the Second Barbary War, which lasted about two weeks. The U.S. navy captured every Algerian ship it encountered, and by the time they had reached Algiers, threatened to destroy the city if all Christian captives (both American and European) were not immediately released and the value of seized cargo wasn't reimbursed. The treaty signed onboard an American ship in 1815 ended America's pirate problem in the Mediterranean for good. By outward appearances, there was consensus in politics, improvement in the economy and peace abroad. It was the beginning of the Era of Good Feelings. 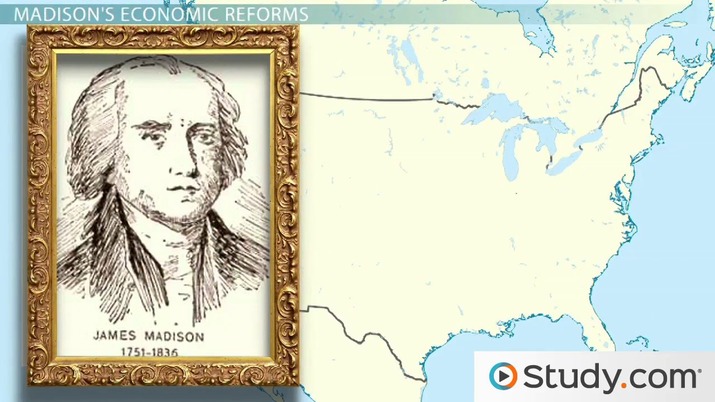 Coming up next: James Monroe's Presidency: The Monroe Doctrine

Of course, things aren't always as good as they seem. The Democratic-Republicans might have been the only viable political party on a national level, but the nation was actually deeply divided over several issues, especially its finances. At first, President Madison wanted to keep going down the road Jefferson had taken, undoing some of Hamilton's economic policies. For example, the Democratic-Republicans had totally opposed the Bank of the United States. Madison allowed the Bank's 20-year charter to expire during his first term, and he refused to sign a bill that reauthorized it. The party had believed that a national bank was unconstitutional and that it threatened to concentrate financial power with the elite at the expense of yeoman farmers. But then came the War of 1812, and Madison realized just how difficult it was to finance a war without a national bank, so he finally signed a bill chartering the Second Bank of the United States, which helped stabilize the economy.

America's economic system today is so interwoven with the Federal Reserve that it's difficult to conceive of the nation without a national bank. But Madison's next two moves are a little easier to imagine: taxes and highways. Madison announced his support for Speaker of the House Henry Clay's American System, which included a protective tariff and several internal improvements. The tariff was designed to encourage the purchase of domestic goods and was only approved for three years. The internal improvements were roads and canals that Madison said would 'bind more closely together the various parts of our extended confederacy.' Now today, some people seem to like taking the scenic route. But most of the time, if you need to just get somewhere efficiently, you take the interstate, right? And you probably know that before there were interstates and airplanes, people took trains. We take for granted that the federal government pays for this kind of internal improvement, but many, many Americans back then thought this was a massive overreach of power, and internal improvements became one of the most divisive political issues of the 19th century. But for the time being, things seemed pretty good for Americans - as long as they were white.

When President Madison first took office, he promoted a view of Native Americans that was sort of childlike: 'They might be savages, but it's only because they don't know any better. So we have to help them.' To his credit, Madison met with representatives of many nations on several occasions and actually ordered the Army at one point to protect their lands from encroaching settlers. But this only lasted until the Battle of Tippecanoe, part of the western conflict leading up to the War of 1812. After that, Native Americans in the Midwest were forced off their land and pushed even farther west. Farther south, a British fort in Florida had been offered to displaced Native Americans. When they refused it, the fort was occupied by fugitive slaves. Though this was British land, the U.S. government was concerned that the so-called 'Negro Fort' would encourage more slaves to escape south. So in 1816, the army provoked the fort, and after a garrison fired a cannon, the army destroyed the fort and most of the families inside.

Let's review. The end of the War of 1812 led to the Era of Good Feelings, a period of relative stability, prosperity and peace. The Federalist Party was gone, but some of President Madison's economic policies revealed a division within Democratic-Republicans. The party had always opposed Hamilton's National Bank, and Madison let its charter expire. But the War of 1812 proved its value, and Madison authorized the Second National Bank. This was followed by an endorsement of Henry Clay's American System. Madison approved a protective tariff and internal improvements such as roads and canals. Despite his earlier position on protecting Native American land, Madison allowed the army to displace Midwestern tribes. The army also attacked and killed runaway slaves who were occupying a British fortress in Florida.

James Madison After the War of 1812: The Era of Good Feelings
Related Study Materials