From 1801 to 1835, during the Virginia Dynasty, John Marshall served as the Chief Justice of the U.S. Supreme Court. Learn how Marshall shaped the judicial branch of government and left a lasting legacy that continues to impact court decisions and citizens' rights. Explore cases such as Marbury v. Madison, Fletcher v. Peck, and McCulloch v. Maryland. Updated: 08/19/2021
Create an account

Right before President John Adams left office, he expanded the judicial system and appointed many Federalist judges to fill those positions. This would have made up for the party's waning influence in elected politics, but many of these so-called 'midnight appointments' were contested and their positions were eliminated. But Adams hit the bull's-eye when he nominated his Secretary of State John Marshall as Chief Justice of the Supreme Court.

Marshall had actually declined an earlier nomination to the Court, but he accepted in 1801 and held the position until he died in 1835 - longer than anyone else in history. He was a devoted Federalist, so even though the Democratic-Republicans ruled the White House and Congress for 24 years, the Marshall Court kept one-party rule in check. He defied President Jefferson by refusing to convict former Vice President Aaron Burr of treason, upholding the independent power of the judicial branch of government. He supported the rights and interests of businesses and agreed with Alexander Hamilton's positions on the economy. 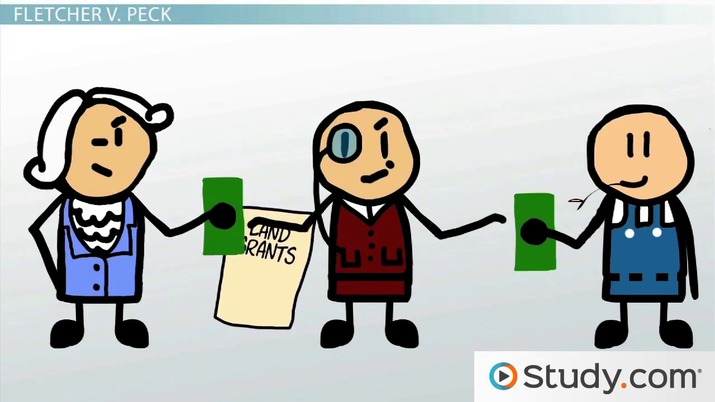 Coming up next: Economic Expansion in the 1800s: Slavery, Immigration & Corporations

But John Marshall's most important legacy is that his decision-making process in landmark rulings fundamentally and permanently changed the Court's role in government. In the days of the early republic, the Supreme Court didn't really have very much authority, but Marshall expanded the Court's jurisdiction to make it an integral part of the federal system of checks and balances. First, he elevated the federal government's laws and power over those of the states, giving the Supreme Court authority over every legislature and court in the nation. He also asserted the Supreme Court's authority to exercise judicial review and throw out laws that contradict the Constitution. Together, these roles made the Judicial Branch equal to the Legislative and Executive Branches.

Let's look at some of the Marshall Court's decisions to help you understand its significance. For simplicity, we'll consider some important cases in chronological order.

The first, and perhaps most significant, landmark ruling you need to know about was in the 1803 case of Marbury v. Madison. Remember those judges that President Adams had appointed at the last minute? Well, it was the Secretary of State's job to deliver the warrants to those new judges. At the time, John Marshall was still the Secretary of State, but through an oversight, he didn't deliver a warrant to William Marbury and several other judges. So when Jefferson was inaugurated, he told his new Secretary of State not to issue those warrants at all, and William Marbury took the case to court. Remember, Marshall and Marbury were both Federalists appointed by Adams - and it was kind of Marshall's fault that Marbury was in this predicament. But Marshall knew that if he ordered the Executive to deliver the old warrants, and Jefferson just flat out refused to obey, the Court would become completely worthless.

Instead, the Marshall Court unanimously decided that the judges did have a right to their commissions. However, the law they were using to defend themselves wasn't constitutional, so the Court couldn't do what Marbury really wanted - which was demand that the warrants be delivered. In a sense, the Marshall Court limited its own power to act. But in a much broader sense, Marbury v. Madison gave the Supreme Court the power of judicial review, which means they can decide if a law violates the Constitution. If it does, they can overturn the entire law, not just the case at hand.

In 1810, the Marshall Court heard the case of Fletcher v. Peck. More than a decade earlier, what had been the state of Georgia had made grants of public land in exchange for bribes to the Yazoo Land Companies. The corrupt companies then sold the property to innocent third parties. When the people of Georgia found out about it, they were furious and demanded that the legislature overturn the land grants and void all the transactions made by the Yazoo land companies.

As you might expect, the people who had bought land from Yazoo were pretty mad about the state legislature taking away property they had legally and honestly purchased. They went to court, arguing that it wasn't their fault the company that had sold to them was corrupt. They said the state of Georgia had illegally seized their property and violated their contracts - which are protected under federal law. The Marshall Court agreed, determining that any state legislation which violates federal law must be thrown out. In doing so, Fletcher v. Peck asserted the authority of federal law over state law.

If you are starting to feel that these old court cases are ancient news and just so boring, let's look at a recent case and see how it relates to the last of the Marshall Court cases we'll discuss. In June 2012, the Supreme Court upheld a controversial piece of legislation regarding health care regulations that many Americans felt was unconstitutional. In this 2012 case, Chief Justice John Roberts said that the law could be interpreted as a tax. Let's stop there. First of all, the fact that people brought federal legislation to the Supreme Court to decide if it is Constitutional is itself a precedent set by the Marshall Court, as you've just seen. But two more specific aspects of that case relate to the 1819 case of McCulloch v. Maryland.

This landmark case upheld the constitutionality of the controversial Second National Bank. Then, as in the 2012 case, many Americans felt that Congress and the President had overstepped their constitutionally defined powers. This is what's called a 'strict constructionist' view of the U.S. Constitution. In his decision, Chief Justice Marshall noted that Section 8 of the Constitution gives Congress the right 'to make all Laws which shall be necessary and proper for carrying into Execution the foregoing Powers.' This means Congress has implied powers beyond what is enumerated in the Constitution to make whatever laws it needs to fulfill the other roles of government. McCulloch v. Maryland also asserted that the federal government has the right to tax citizens.

In other words, the Supreme Court has said, 'No, of course the Constitution doesn't say we could have a bank. Or health care. Or a lot of things we can't imagine right now. But it does say that Congress can make any necessary and proper laws, and it can tax you to pay for them.' Of course, people still argue about what is 'necessary and proper.' We probably always will.

It is impossible to explain in a few minutes all the ways that Chief Justice John Marshall defined American law. He gave citizens the right to bring a case that was decided in a state court before the Supreme Court for appeal. He defined corporations and protected their growth. He defined interstate commerce and Congress's right to regulate it; at the time, this overturned many state-granted monopolies, but it has empowered the national legislature to this day. In these and so many other ways, John Marshall expanded the Court's jurisdiction and made it an integral part of the federal system of checks and balances.

Let's review. Chief Justice John Marshall was one of President John Adams's last-minute judicial appointees. As the longest serving Chief Justice of the Supreme Court, Marshall wrote many landmark decisions that expanded the power of the judiciary to make it an important part of the federal system of checks and balances. The 1803 case of Marbury v. Madison asserted the Court's power of judicial review. The 1810 case of Fletcher v. Peck upheld the authority of federal law over state law. In 1819, McCulloch v. Maryland identified the implied powers of Congress. These are just a few of the far-reaching precedents of the Marshall Court, defining American law to this day.