Amy has a BA/MA Criminal Justice. Worked with youth for over 20 years in academic settings. Avid reader, history and mystery lover.

~'Look Back in Anger~' is a play written by British playwright John Osborne first performed in 1956. In this lesson, we'll take an in-depth look at a summary and analysis of the themes. Updated: 08/25/2021
Create an account

The play ''Look Back in Anger'' was written in the 1950s by British playwright John Osbourne. The play's main characters are a married couple and their two friends in the central part of England called the Midlands.

The play is a drama that emerged during the kitchen sink realism movement, which usually featured some angry young man disillusioned with the society he lives in. Let us take a closer look at this compellingly human tale. 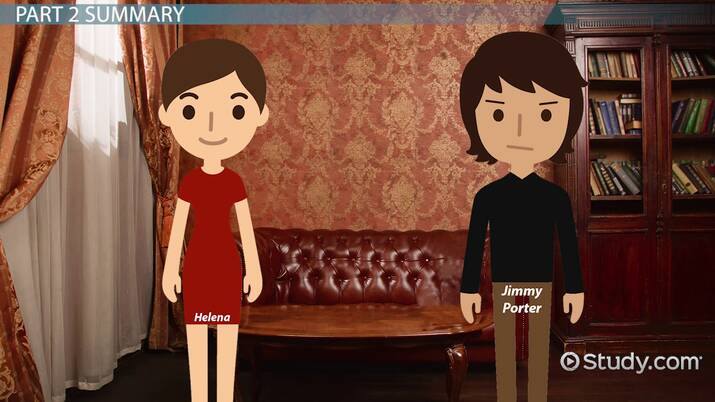 Coming up next: Machinal by Sophie Treadwell: Summary, Themes & Quotes

In Part 1, we are introduced to Jimmy Porter, a provocateur described as ''a disconcerting mixture of sincerity and malice, of tenderness and freebooting cruelty; restless, importunate, full of pride, a combination which alienates the sensitive and insensitive alike.'' He picks on his roommate Cliff, who is affable and a peacemaker, putting him down because he is not educated.

But Jimmy saves his most vitriolic and poisonous comments for his wife Alison. Jimmy taunts her for her upper-middle-class upbringing and mocks her family, trying to get a response out of her. Alison responds with only mild answers and continues ironing.

When Jimmy and Cliff engage in horseplay, Jimmy deliberately pushes Cliff into Alison and she is burned by the iron. Cliff and Alison tell Jimmy he needs to leave. While Jimmy is out of the room, Alison tells Cliff she is pregnant and Jimmy doesn't know. Cliff encourages her to tell him. She speaks to Cliff about their marriage and admits that one of the reasons she married him was because her parents opposed the marriage.

When Alison's friend Helena calls and needs a place to stay, Alison offers their place. Jimmy, who can't stand Helena, angrily lashes out. At the end of his tirade, he cruelly tells Alison, ''If only something — something would happen to you, and wake you out of your beauty sleep! If you could have a child, and it would die. Or let it grow. Let a recognizable human face emerge. . . if only I could watch you face that. I wonder if you might even become a recognizable human being yourself. But I doubt it.''

Part 2 takes place two weeks later. Jimmy, Alison, Cliff, and Helena are now living together. It's a tense situation and Helena and Jimmy repeatedly butt heads. Helena convinces Alison that she needs to go back home to her parents. Alison does so while Jimmy is away visiting a friend's mother who is dying.

When Jimmy returns, he and Helena get in a fight. Helena tells him about the baby; he tells her he doesn't care. At the end of the fight, they have sex and Helena takes Alison's place.

In Part 3, Alison returns to the old apartment. She lost the baby and is looking extremely unhealthy. After she and Helena talk, Helena leaves the apartment for good.

Jimmy is unsympathetic to Alison until she pleads with him and tells him, ''Don't you see! I'm in the mud at last! I'm groveling! I'm crawling!'' Jimmy, seeing that Alison has experienced the terrible experience he wished upon her, and feeling that she could now understand him better because she knew what it's like to get hurt, comforts her and they reconcile.

Look Back in Anger chronicles the story of an angry young man who wants his wife and the world to feel the same hurt he has felt. He wants to punish those who have had the fortune of not having experienced the pain he has had in life.

Throughout the play, we see a theme of misogyny, hatred towards women. It could be argued that Jimmy does not feel like he deserves Alison and must make her small so that she is equal or even beneath him. He also has negative things to say about women in general, commenting on how noisy, insensitive, and clumsy women are (despite exhibiting some of these traits himself). Jimmy refers to women as ''butchers'' and makes a comment on the ''eternal flaming racket of the female.''

Classicism, or conflict between socioeconomic classes, is also a prominent theme. Jimmy displays anger over class distinctions and resentment of Alison's middle-class background. He puts her and her family down constantly and has a knack for playing the victim of society's unfair class system. He doesn't feel like Alison can truly understand him because she has never had something really bad happen to her.

Alison keeps her emotions in tight reign. She verbally tiptoes around Jimmy, afraid of setting him off. She has learned to protect herself by not speaking up for herself in fear of incurring Jimmy's wrath. She only leaves him when Helena calls Alison's father to take her home.

Otherwise, with the exception of a verbal outburst or two, she is passive. Perhaps that's part of growing up in an upper-middle-class family that had old-fashioned ideas and expectations on how females were to behave. Alison married him perhaps as an act of rebellion against those values.

Helena acts as a catalyst that sends the status quo between husband, wife, and friend into a tailspin. She pushes back at Jimmy's misogynism and his condescending attitude. She convinces Alison to leave, perhaps consciously, perhaps not, as she is in love with Jimmy. That being said, Helena regrets her feelings and redeems herself by leaving him and returning to her values.

Cliff, who plays peacemaker and tries to deflect Jimmy's attacks on Alison, is not entirely blameless for the hostile atmosphere. He enables Jimmy's behaviors instead of confronting them. He soothes and deflects but never really takes a firm stand on anything. In some ways, he seems to like the arrangement and selfishly does not want Alison to leave this toxic environment because she is his friend.

Look Back in Anger is a drama from the kitchen sink realism movement, which usually featured an angry young man disillusioned with society. In the play, an angry young man named Jimmy Porter and his passive wife Alison are in a verbally and emotionally abusive marriage. Jimmy takes out his anger and frustration at the perceived unfairness of life on Alison who is secretly pregnant.

Cliff is a mutual friend and roommate who is a peacemaker but also enabler. Alison's friend Helena comes to visit and acts as a catalyst that upsets the status quo. While Alison returns to her family to have the baby, Helena and Jimmy have an affair. However, when Alison returns having lost the child, Helena leaves, and Jimmy reconciles with his wife who he feels has now known pain.

Themes that permeate the play include misogyny, hatred towards women, and classism, conflict between socioeconomic classes.

Alison Porter is a _____ character in Look Back in Anger.

A Passage to India: Summary & Characters