Born in Salinas, California in 1902, novelist John Steinbeck is one of the most widely-read American writers. Discover the plot, themes and characters in his best-known novel, 'The Grapes of Wrath,' as well as Steinbeck's other key works. Updated: 08/25/2021
Create an account

Most of us don't own a time machine. That's a bummer, but the next best thing can be a book that transports us to a different place and time. And one of my favorite places to visit is Northern California in the early 20th century. Why? Because that's the world of John Steinbeck.

Steinbeck was born in Salinas, California in 1902. He grew up and lived for many years in the Monterey Bay area. This area may be about as close to Eden as you'll find. There's terrific farmland, beautiful scenery and, of course, the Pacific Ocean. Steinbeck would immortalize the area in a multitude of novels.

We're going to spend a little time on The Grapes of Wrath, his most notable work, then quickly review the rest of his impressive literary legacy. 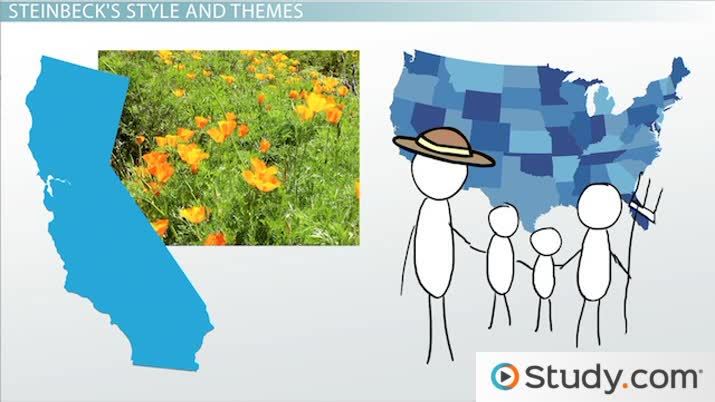 Coming up next: Of Mice and Men: Summary and Analysis of Steinbeck's Style

The Grapes of Wrath

Many people consider The Grapes of Wrath to be Steinbeck's greatest novel. In fact, it won the National Book Award, a Pulitzer and helped earn Steinbeck the Nobel Prize.

Published in 1939, it's the tale of the Joad family. Tom Joad is the central character, but his entire family is part of the story. They're tenant farmers from Oklahoma during the Great Depression. When their crops are destroyed in the Dust Bowl, they decide to head west for the promise of greener pastures in California. They hope to become fruit pickers there.

But everyone else who is suffering seems to have the same idea. The road is clogged with other poor travelers. They meet all kinds of fellow 'Okies,' as they're derogatively called, either heading the same way or returning after not finding what they'd hoped for.

When they get to California, the Joads find that there's a surplus of workers and the big corporate farmers are running the show. They move from camp to camp, but as newcomers, they get shunned by their fellow laborers. There are just not enough jobs to support everyone who arrives in California.

There are arguments over whether the workers should organize into unions or not. Meanwhile, the authorities threaten to run them all out. The Joads finally find decent work picking fruit, but then they realize they were hired as strikebreakers.

Tom Joad undergoes a transformation and realizes his destiny is to lead the workers and help them organize. Doing so, though, means abandoning his family. The novel ends with them no better off than when they started, though there is a glimmer of hope for the future.

The themes in The Grapes of Wrath are not unusual for Steinbeck. One of the things I like most about Steinbeck is that you could boil down his style and themes to one word: 'America.' His work is quintessentially American. I mean, what is more American than heading west to California in search of a better life? And many of Steinbeck's characters are seeking the elusive American dream.

But let's break up this overarching America notion into a few key parts. First, social protest is pervasive in Steinbeck's work. He often wrote about the downtrodden in society, particularly farmers and migrant workers, like the Joads.

Related, Steinbeck's works are particularly attuned to the issues of humanity and the cruel ways we treat those who are different from us, whether because of class, foreignness or something else. One of my favorite lines from The Grapes of Wrath that conveys this idea is about the meaning of the term Okie: 'Okie use' ta mean you was from Oklahoma. Now it means you're a dirty son-of-a-bitch. Okie means you're scum. Don't mean nothing itself, it's the way they say it.' Here, a word that could have been a badge of pride for Oklahomans becomes a slur.

Then there's realism. I think of it like this: Steinbeck's characters and plots are true to life. Their situations and struggles are very grounded. Similarly, Steinbeck's prose is direct and straightforward. Though some novels are experiments in form, his language is usually very accessible. And Steinbeck's stance on the issues he presents is rarely ambiguous.

There's also naturalism. Steinbeck loved America's landscapes and he portrayed them vividly. Long before I ever lived in Northern California, I felt I knew the farms, mountains, beaches and towns from their representations across his works.

Finally, but no less important, are issues of family. The Grapes of Wrath isn't just the story of Tom Joad; it's the story of the Joad family, a multigenerational clan. In Steinbeck's works, families can be torn apart, or their familial bonds can form the characters' core.

Let's do a quick tour through Steinbeck's other major works, focusing on their styles and themes and how they fit into his literary legacy.

His earliest major work is 1935's Tortilla Flat. This is a bit of a silly collection of stories about a group of Mexican-American guys and their meandering misadventures in Monterey County. They're good-natured souls; though they'd much rather drink than work. There is an underlying commentary on the social issues facing the Mexican-American community, which gives a little weight to the novel.

In many ways, 1936's In Dubious Battle treads the same ground as The Grapes of Wrath. It's about striking fruit workers in California and their efforts to organize. While the American communists are fighting for the laborers, there is criticism of their motives. The oppressive capitalist system, though, is the true villain of this story.

A major short novel is 1937's Of Mice and Men. Like The Grapes of Wrath, this is a tragic story of migrant workers in the Great Depression. There's a video on this one, and I encourage you to check it out.

Another short novel is 1945's Cannery Row, which is set in Monterey. This is one of my favorites. I think of this one as like a TV show that's more about its characters than its plot. And like a TV show, they have a series of little, largely insignificant adventures, but always pretty much end up back where they started. While it can be a light book, there's a looming sense of loneliness among its characters and sadness about their situations.

In 1954, Steinbeck would write a sequel, Sweet Thursday, which is kind of like a reunion show where most of the fun is in revisiting favorite characters. But before that, there was 1947's The Wayward Bus. Though not as well known, this is another fascinating study of characters. Like Cannery Row, the characters are lost and lonely.

Then we get to another major work, 1952's East of Eden. Remember when I said Monterey County was a little like Eden? Steinbeck certainly thought so, too. He sought to write an epic about family history in the Salinas Valley, and that he did. This novel is principally about those two things: family and the Salinas Valley. It's also pretty heavy-handed with its Biblical imagery. For example, there are numerous characters whose names begin with a 'c' or 'a,' and they all contain allusions to the Cain and Abel story from Genesis.

In 1961, Steinbeck published his final novel, The Winter of Our Discontent. This is a dark tale about a family that loses its wealth, then struggles with moral degradation. It's a harsh commentary on American culture in the prosperous times following World War II.

So, that's Steinbeck's final novel. But there's one more very important work to discuss: 1962's Travels with Charley: In Search of America. In 1960, Steinbeck converted a pick-up truck into a camper and set out to see America. His companion? Charley, his dog. The resulting non-fiction book is a fascinating account of the nation Steinbeck had been describing for decades, seen through the new lens of the 1960s.

Of course, 1960 was a particularly interesting time to see America. The Kennedy-Nixon election season was in full swing. A new technological age was dawning (and, in Steinbeck's view, was posing a serious threat to American culture - if only he'd been around for so-called smartphones...). And, in one of the book's most gripping passages, there is a major conflict throughout the Deep South over school integration. Steinbeck recounts with horror the disgusting racism of white mothers vehemently protesting their schools accepting black children.

Steinbeck died in 1968 and it's rumored that he knew the end was near, so he really just wanted to see the nation he so loved one final time.

In summary, John Steinbeck is a Nobel Prize and Pulitzer Prize-winning author, known for works including Of Mice and Men, East of Eden and Travels with Charley. One of his most famous novels, The Grapes of Wrath, follows the Joad family as they travel from Oklahoma to California during the Great Depression, in search of farm work.

Steinbeck often wrote about migrant farmers, labor struggles and similar stories of the poor and downtrodden. He also wrote with stark realism and a deep appreciation of the natural world. A recurring setting for his works is Monterey County in Northern California, where he grew up and which he considered a kind of paradise.

Why Was The Grapes of Wrath Banned? - Censorship & Controversy

The American Dream in The Grapes of Wrath: Theme & Analysis