Thomas Hardy's final completed novel, Jude the Obscure, encompasses the story of a young worker, Jude, who has aspirations of a future in academia. Follow the themes of the Victorian Working class struggles, and the characters' attitudes towards marriage, religion, and sexuality. Updated: 10/31/2021
Create an account

Thomas Hardy's last finished novel, Jude the Obscure, is widely considered to be his best. Hardy explores all the big issues: class, faith, hope, love, sex. In the process, this seemingly simple story of a doomed love affair transcends the Victorian era in which it is set, making it a timeless classic, a universal tale of longing and despair. 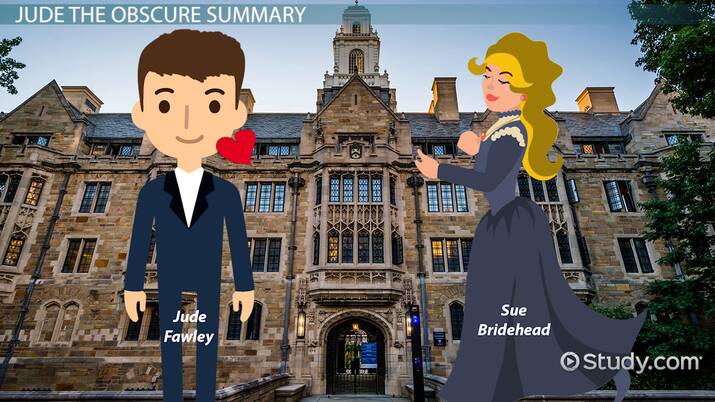 Jude the Obscure is the story of a working-class young man from southern England, Jude Fawley, who dreams of someday becoming a scholar at the prestigious university at Christminster, modeled on the world-famous Oxford University.

Before this can happen, however, Jude is tricked into marriage by the seductive, but opportunistic, Arabella Donn, who falsely claims she is pregnant. The marriage soon falls apart and Jude travels to Christminster, only to be denied entry to the university. The classical studies he has pursued all his life, almost entirely on his own, have been for nothing. He has neither the education, nor the money, to become a scholar.

While at Christminster, he meets and quickly falls in love with his cousin, the vivacious and rebellious, Sue Bridehead. She, however, marries Jude's former schoolmaster and mentor, Richard Phillotson, who is cruel to her. Their marriage also fails; Sue and Jude divorce their spouses, but Sue refuses to marry Jude.

Then Jude discovers that he has a long-lost son with his estranged wife, Arabella. Jude's son comes to live with him and Sue. Still unmarried, Sue and Jude bear two more children, but are shunned by their community. Jude loses his job as a stonemason, the family is denied lodgings, and so the five of them embark on a seemingly endless search for work and housing.

Ultimately, Jude's namesake, his son with Arabella, known as Little Father Time because of his grave manner, hangs the younger children and himself, leaving behind a note which says only, 'Done because we are too meeny (many).'

Devastated, Sue returns to Phillotson and a life of religious devotion. They remarry, as do Jude and Arabella. After one more attempt to reconcile with Sue, Jude falls ill and ultimately dies at the age of 30. Arabella immediately moves on in search of her next husband, while Sue lives out the rest of her dreary life with Phillotson.

Let's now take a closer look at the different themes and overall analysis of Jude the Obscure one step at a time.

The Struggle of the Victorian Working Class

Jude, though born into the working class, has big hopes of social and class mobility. He dreams of the kind of education and the kind of social and financial success from which those of his class are too often barred. But Jude's impoverished background is not so easily shaken.

An orphan raised by his aunt, Jude learns that his classical academic pursuits have all been for nothing: he's studied the wrong things. His head is stuffed with useless and probably incorrect information, and, what's worse for the scholars of Christminster, he has neither the resources nor the 'breeding' to become a scholar. He's, quite simply, not the right class and, all too often in Victorian England, the class in which you're born is the class in which you remain.

Jude succumbs before marriage to Arabella's seductions and feels compelled, both by honor and by religious and social conviction, to marry her, tying himself eternally to a shallow woman whom he doesn't really love.

Conversely, the truly loving relationship between Sue and Jude is destroyed because it exists outside of marriage. The social condemnation and ostracism they incur ravage what might otherwise have been a very happy family. Sue, Jude, and their children are brutalized, and made hungry and homeless, through the scorn leveled against them.

And the only possible outcome of such hypocritical judgment, Hardy suggests, is tragedy. Not only do Sue and Jude's living children pay the ultimate price, their unborn child does, as well. Sue miscarries when she finds the children's bodies, representing the loss, not only of the present, but of the future.

Sue Bridehead is the ultimate iconoclast in an era known for its conformity. She is a free-thinker who seeks to live life on her own terms. When she discovers that she doesn't enjoy having sex, she feels no obligation to engage, even for the pleasure of her husband, despite the Victorian injunction that such is her 'wifely duty.'

And when her husband is cruel to her and she discovers she doesn't love him, she doesn't just leave. She divorces him. That's a big distinction in a time when making the end of a marriage official was a bit like spitting in the eye of God.

Furthermore, Sue's refusal to marry the man she does love, the one for whom she divorced her husband, once again flies in the face of social convention and religious requirement, particularly once the two begin having children.

But Hardy demonstrates how pervasive religious indoctrination can be, especially when enforced by profound social pressure. When Jude's eldest son kills himself and his half-siblings, Sue is convinced that the tragedy is divine punishment for leaving the church and carrying on a sexual relationship outside of marriage, feelings reinforced by Sue's own natural antipathy toward sex in general.

She abandons Jude in her grief as a form of penance, returning with fervent devotion to the church she had one rejected and to the role of dutiful wife that she had once repudiated. Rather than being the independent woman living life on her own terms, Sue becomes another disappointed wife, defined by the culture and the faith that she had sought to define for herself.

Let's take a couple of moments to review what we've learned. Thomas Hardy's last finished novel, Jude the Obscure, tells the story of Jude Fawley, a working-class man who dreams of becoming a scholar, and of his doomed relationships with the seductive Arabella Donn and the true love of his life, Sue Bridehead. When Jude's dreams of an academic life fail, he and Sue leave their disastrous marriages and endeavor to make a life together. Though unmarried, the couple have two children together, in addition to raising Jude and Arabella's son. However, publicly ridiculed and ostracized, the family embarks on a life of poverty and homelessness until, ultimately, Jude's son kills his half-siblings and himself. Sue, devastated, returns to her first husband and a life of religious devotion, while Jude, still in love with Sue, regretfully returns to Arabella before dying a broken young man at the age of 30. The many tragedies presented in Jude the Obscure represent Hardy's critique of Victorian social structures, particularly the economic and religious institutions which so brutally define its citizens, forcing them to be who their class and faith require them to be and destroying those who can't or won't comply.