Kimberly has taught college writing and rhetoric and has a master's degree in Comparative Literature.

In this lesson, we will explore the character of Judge Hathorne from Arthur Miller's play The Crucible. As a Puritan judge who comes to Salem to participate in the witch trials, Hathorne plays a significant role in how the story unfolds.
Create an account

Judge John Hathorne is both a historical figure and a semi-fictionalized character in Arthur Miller's play The Crucible. The historical John Hathorne lived from 1641-1717 and was a merchant and magistrate of the Massachusetts Bay Colony and Salem, Massachusetts. He was one of the most prominent judges during the Salem witch trials beginning in 1692. The records of the trials show that Hathorne often questioned witnesses and defendants harshly. 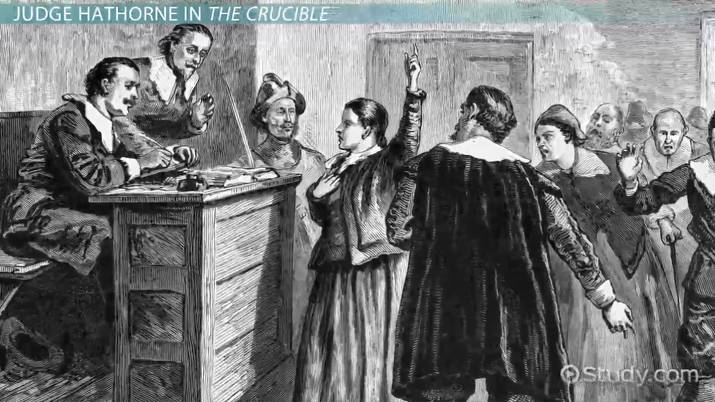 Judge Hathorne arrives in Salem with Deputy Governor Danforth. Danforth is to preside over the witch trials, and Hathorne will be a prosecutor in the trials. Both Danforth and Hathorne believe unwaveringly in the Puritan government of Massachusetts. Puritans were a religious and political group of Protestants that formed in the 16th century and believed in the need for a greater strictness in worship and religious discipline. This fixation on religious purity fed into the hysteria of the witch trials, as many Puritan officials and citizens believed that a battle between God and the devil was playing out across New England.

Judge Hathorne himself comes across as arrogant in Miller's play. His words and actions give the impression that he has come to Salem with his mind made up. He is totally unwilling to consider any other explanations other than the group of girls is telling the truth, that they temporarily succumbed to the devil's influence at the hands of various members of the community. He believes that the voice of God is being revealed through the girls' numerous accusations. In Hathorne's mind, his position as a government official means that his own judgment of the situation is correct.

In The Crucible, Hathorne is one of the most unyielding and dislikable characters besides Abigail Williams and the girls she leads. Danforth, at least, seems to momentarily consider new information that comes forward. Hathorne, on the other hand, is intensely suspicious of anyone who comes forward to dispute the version of events that he believes in. For example, when Giles Corey comes forward and accuses Mr. Putnam of telling his daughter to accuse a community rival of witchery, Hathorne promptly exclaims that Giles is in contempt of court when he hesitates to name his source for this information.

As time, convictions, and executions go by, Danforth and Hathorne remain convinced of the authority and truth of the court. Reverend Hale, in contrast, begins to see that hysteria and false accusations have run amok in Salem. Hathorne regrets nothing. He becomes almost joyful when John Proctor appears ready to confess (falsely) to witchcraft:

Proctor replies: ''I will have my life.''

Hathorne, with a mystical tone, says: ''God be praised! It is a providence!'' He rushes out the door, and his voice is heard calling down the corridor, ''He will confess! Proctor will confess!''

Arthur Miller's The Crucible uses the Salem witch trials to comment on humanity's tendency to give way to panic, hysteria, and persecution. Written in 1953, the play both analyzes these tendencies at work within the context of the witch trials themselves, and uses the trials to comment on the injustices of the Red Scare. The Red Scare was a period in the late 1940s and early 1950s when Americans increasingly feared the rise of communism in the United States. Numerous people were falsely accused and prosecuted, and an atmosphere of fear spread. Miller saw parallels between this fear of communists and the fear of witches in Salem.

In this context, Hathorne and Danforth come to represent the narrow and misinformed 'pursuit of justice' in both time periods. In both cases, many people were declared guilty simply because they'd been accused.

Let's look at some verbal exchanges that Judge Hathorne has throughout The Crucible. These exchanges help to get a clearer picture of Hathorne's character:

1. In this exchange, Mary Warren tells the Proctors about Judge Hathorne questioning a beggar woman about why she mumbled when Mary turned her away without food. The woman claims that she was simply reciting the ten commandments. Hathorne demands that she proves that she knows the commandments, and the woman cannot. Hathorne believes this is proof that the woman was cursing Mary, when in reality, she was probably only angrily grumbling over not getting any food. Hathorne consistently accepts the explanations that support witchcraft.

Mary Warren says, ''And so I told that to Judge Hathorne, and he asks her so. 'Sarah Good,' he says, 'what curse do you mumble that this girl must fall sick after turning you away?' And then she replies…'Why, your excellence, no curse at all. I only say my commandments.' ….''

Mary Warren then says, ''Judge Hathorne say, 'Recite for us your commandments!'...and...she could not say a single one. She never knew no commandments, and they had her in a flat lie!''

2. In yet another exchange, Hathorne says: ''Now, Martha Corey, there is abundant evidence in our hands to show that you have given yourself to the reading of fortunes, Do you deny it?''

Martha Corey replies: ''I am innocent to a witch. I know not what a witch is.''

Hathorne says: ''How do you know, then, that you are not a witch?''

3. Lastly, Reverend Hale realizes that the convicted are innocent, and he has decided to try to persuade them to confess to save their lives. Hathorne is still convinced that everyone is guilty.

Hale says: ''I have sought a Christian way, for damnation's doubled on a minister who counsels men to lie.''

Hathorne replies: ''It is no lie, you cannot speak of lies.''

Hathorne replies: ''I'll hear no more of that!''

In The Crucible, Judge Hathorne is an arrogant and stern judge, determined to convict people of witchcraft. He believes in the court and already has his mind made up. He refuses to consider that the girls might be pretending and that the accused are innocent.

Francis Nurse in The Crucible

Judge Danforth in The Crucible

Tituba in The Crucible

Betty Parris in The Crucible

Ann Putnam in The Crucible

Ruth Putnam in The Crucible

Quotes from Rebecca Nurse in The Crucible

Reverend Parris in The Crucible

Revenge in The Crucible

Mary Warren in The Crucible

Thomas Putnam in The Crucible

Giles Corey in The Crucible

Main Characters in The Crucible