The U.S. judicial power has two main levels, two types of practice, and two types of law. Explore the definition of judiciary power, discover how the U.S. judiciary system works, and review the differences between criminal and civil systems through some examples. Updated: 10/14/2021
Create an account

If you were designing a government, there are a few things you would have to do pretty regularly. For instance, you would need a body to make laws, and you would need another body (or maybe just one person) to carry out, or execute those laws. But how do you know if the laws are right? And how do you settle arguments or disputes that may come up over how the laws are carried out?

The Founding Fathers faced a similar question in the design of the U.S. Constitution. The Congress was going to make laws, as described in Article I, a location that ought to make clear just who the Framers thought was going to be the most powerful component of the government, and the President was going to carry them out, or execute them. As for the other duty, judging laws, well, it's clear the Founding Fathers didn't give a ton of thought to this. In fact, the article describing the judicial branch, Article III, is one of the shortest and least-detailed parts of the whole document. However, over the last two centuries, thanks to federal laws, crucial court cases, and fly-by-the-seat-of-the-pants improvisation, the judiciary has become just as influential as the other branches of the U.S. government. 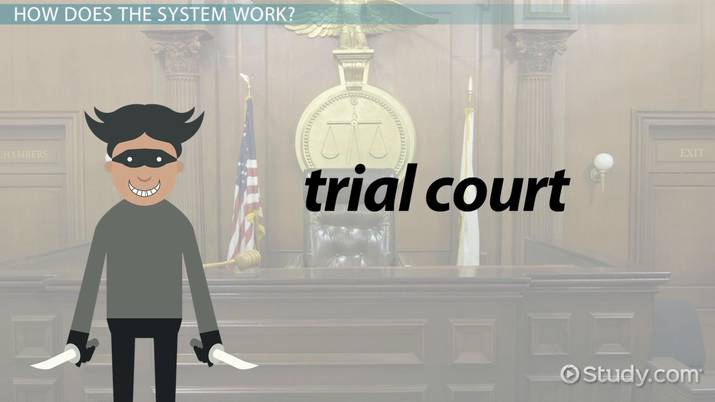 Coming up next: Judiciary Act of 1789: Definition & Summary

What Is a Judiciary?

The judicial branch's main job, as it is in any nation, is to resolve disputes, whether between separate parties or between a party and the government. The U.S. version is a little complicated, since it's actually two different systems, with two different types of law. There is a federal system and a state system, both of which include criminal and civil law. In both systems, and with both types of law, there are two main levels: trial courts and appellate courts. This sounds confusing, but gets clearer as you look at it.

The federal court system is largely an invention of the U.S. Constitution and subsequent federal law, especially the Judiciary Acts of 1789 and 1801, which created the courts below the Supreme Court. The Supreme Court is the crown jewel of the court system, serving as the final stop for appealed federal cases and some state cases, though that is much less common. The fifty states all have their own Supreme Courts, too. They handle state-based appeals, and only on issues of major constitutional importance or relevance do those cases end up in the U.S. Supreme Court, which only handles a few dozen cases per year.

How Does the System Work?

If a person commits a crime, he is charged by the state for violating the law. This is the standard scenario for most crime in the U.S. Of course, you could be charged in federal court, but you would have to either break federal law, or commit a crime on federally-owned land, or both. Much more often, states handle most criminal prosecution.

If you're charged by the state, you start off at the lowest level, the trial court, which is what most of us think of when we think of courts. There are juries most of the time, and judges, and witnesses that offer testimony, and lawyers that question them. This is what's called a court of original jurisdiction, which is a fancy way of saying that it's the place where the trial process begins.

If you are acquitted, found not guilty, the whole process stops right there. If you're convicted, that is, you're found guilty, however, then you have the right to appeal to the next level up. Every court above the trial court is an appellate court, and their only job is to make sure the lower court didn't commit some error. If you win at any level above the trial court, the process stops and you are free; but if you lose, you can continue to appeal, all the way to your state's Supreme Court. If you lose there, however, you are generally out of luck.

At the federal level, the system is almost identical; you start in a federal district court (there are 96 districts across the nation), and if you have to appeal, you would go through one of the 13 circuit courts (12 across the country, and 1 for the District of Columbia). Your appeal, if there is one, would end up at the U.S. Supreme Court; though as mentioned before, very few cases get that far.

The other distinction in the court systems has to do with the type of law under which a case falls. A criminal court handles violations of the legal code by individuals or groups, as charged by the state or the federal government. So if someone commits a crime (steals a car, for instance) the case is a criminal one, and goes to state or federal court.

Assume for a minute that the person who stole the car also crashed it; a crime was committed, and the state will put him on trial. But the owner of the car may want to be compensated for the loss of the car, and there's not much the state can do about that. So the owner may choose to file a lawsuit, a demand that the perpetrator be forced to pay for the damages. This type of civil action, when one party is suing another, would take place in the other half of the judiciary system: the civil law system. The civil system looks exactly like the criminal system. There are district and state courts of original jurisdiction, and appellate courts, but they handle matters of money, not criminal penalties.

The essential function of the judiciary in the U.S. is to settle disputes between parties. The major question is one of jurisdiction: Which part of the system is best to handle a given dispute? It gets much more complicated when you add in sub-state level courts (county or municipal courts, for example). But the basic premise is the same; from Article III on down, the judiciary power has achieved as much prominence as the legislative or executive powers, and is just as widespread.

The judiciary of the United States has two primary levels: federal, which handles disputes at the national level or between states, and state, which handles all intrastate issues and most criminal offenses. At both levels, cases begin at a trial court, called a district court in the federal system, and in cases of an accused's conviction, the case can move on to appellate courts, which handle the appeal. A case will generally end at either the state supreme court or the U.S. Supreme Court. There are two types of law in these systems: criminal, where a person is accused of a crime by the government (again, either federal or state), and civil, where one party sues another for financial compensation or restitution.

Public Issues & Their Significance in the Modern Corporation

Democrat vs Republican Views | What Do Democrats & Republicans Believe In?

Chief of State Role & Examples | Head of State vs. Head of Government