What Does Article III Say?

The problem with the Constitution, more often than not, is that it is maddeningly vague about concepts that seem to matter deeply. The First Amendment, for instance, guarantees freedom of speech--but what, exactly, is 'speech'? The Second Amendment protects the freedom to bear arms--but what does that mean, 'arms'? All kinds of weapons? None of them, except flintlock muskets? And what, while we're on the subject, what does 'freedom' even mean?

This wasn't entirely unplanned, though. Even though the Constitution's Article III is similarly indistinct on matters of the judicial branch, it left the details to Congress. And that body came through with a law in 1789: the Judiciary Act, which filled in the gaps and created the modern federal court system.

The Constitution is pretty easy to read once you know the various sections. Article I is on the Congress, Article II is on the executive branch (the President), and Article III is on the judiciary. However, it seems like the Founding Fathers wrote the entire document in descending order of importance, since each successive Article is shorter than the one before it.

And as for Article III? Well, all it says is that there's going to be a 'Supreme Court,' and that it can judge matters of constitutional law, treaties, and conventions, and that there's going to be a Chief Justice (referred to in the sixth clause of the Article). But as far as how many courts there would be--or even how many justices there would be on the Supreme Court, other than the chief--it was left unsaid.

The important part of the Article really is this: '…and in such inferior Courts as the Congress may from time to time ordain and establish.' This was a pretty clear signal that the Founding Fathers didn't want to try to sketch out a working court system, beyond the crown jewel of the Supreme Court. It would be up to Congress to figure out the details. 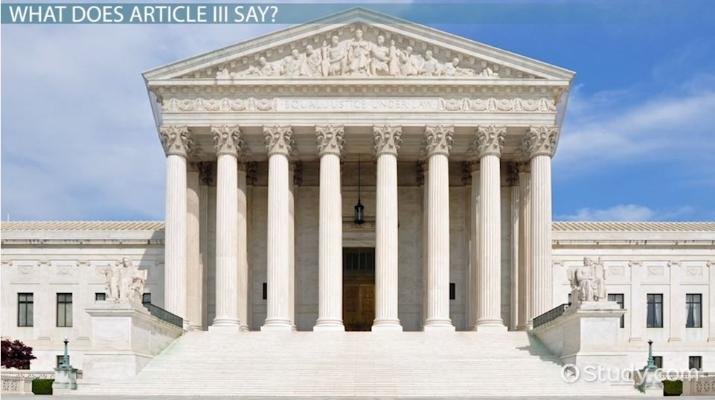 Coming up next: Legalism: Definition & Beliefs

Almost immediately after the Constitution's ratification, the Congress got down to it. The Judiciary Act of 1789 establishes the structure of the court system we use today, remarkably unchanged over two centuries' use.

The first thing the Act does is establish what the Supreme Court is going to look like: one Chief Justice and five Associate Justices (this would change in number over time, settling eventually at eight associate justices). The Act also specified what the Court would be doing, since the Constitution didn't really get into it. The Supreme Court, thanks to the Judiciary Act, is given control of civil matters between states, or between a state and the federal government, or involving foreign ambassadors. Additionally, the Court would handle appellate decisions arising from lower federal courts, which means if a party to a suit wants to appeal the decision to the next highest court up, the Supreme Court is the end of the line for such appeals.

As far as these lower federal courts, the Act also created 13 separate judicial districts within the 11 states, which, at that point, had ratified the Constitution. A year later, the two holdouts, Rhode Island and North Carolina, would be added in. These courts would be the courts of original jurisdiction, which means two things. First, that they were the starting point for most federal court cases. And second, it meant that these courts would look effectively like what most of us think of when we think of a court (a jury, two sides presenting evidence, a verdict). Appellate courts rule on matters of law and whether or not courts of original jurisdiction made any errors. The Supreme Court today almost never hears original testimony; it just judges on whether or not lower courts did their job correctly, or to resolve conflicting decisions between lower courts.

At this point today, the elements of the Judiciary Act are generally intact, with some changes in size and number of jurisdictions. There are 94 district courts now, and there are 13 Courts of Appeal (one added for the District of Columbia), but other than that, the essential structure of the Judiciary Act is unchanged. Though the details of Article III were lacking in the original text of the Constitution, the U.S. Congress stepped into the breach and crossed the T's and dotted the I's, creating the federal court system we employ today.

Article III of the U.S. Constitution was intentionally vague on the scope and structure of the federal court system, describing only the existence of the Supreme Court and its jurisdiction. The Judiciary Act of 1789 filled in these details, creating a series of federal districts and judicial offices, as well as delineating the specific authority and makeup of the Supreme Court.

The Revolution of 1800: Definition & Overview

The Grange and the Populist Party Platform: Goals, History & Definitions

The Daughters of Liberty | Facts & History