Justice in Dante Alighieri's Inferno is an important theme as Dante goes into hell and witnesses the sinners being punished based on crimes committed in life. In this lesson, we will earn about justice as a theme. Updated: 06/19/2022
Create an account

Dante journeys deep into the nine circles of hell with Virgil as his guide in Inferno, the first book of Dante Alighieri's The Divine Comedy. Justice is a central theme in the book, which makes sense because hell is where sinners go to pay for those crimes committed in life. In Dante's version of hell, nine circles of hell exist, with each circle being reserved for a certain category of crime. As Dante ventures into hell, we learn that justice is about paying the price for committing sin, and that each sinner gets a punishment based on the sin committed. For example, a murderer may have to suffer in hell by being murdered over and over again in hell. Justice is about restoring balance. In this lesson, we will learn about justice as a theme in Inferno by going over several quotes. 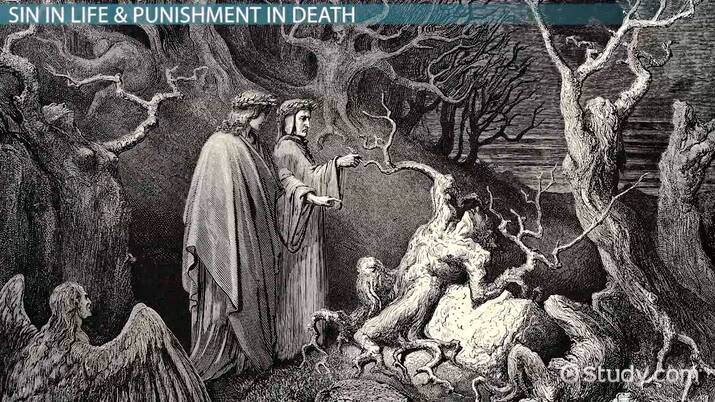 Coming up next: Number Symbolism in Dante's Inferno

Sin in Life & Punishment in Death

Dante talks a lot about contrapasso, which translates to ''counter-penalty.'' The idea is that every crime must be paid for with a fee or penalty. Pier della Vigna was a poet who committed suicide in 1249 after being imprisoned for something he didn't do. His death was gruesome; his eyes were ripped out by prison guards, and afterwards, he slammed his head against the cell wall until he died. Dante and Virgil meet Pier della Vigna in the seventh circle of hell where violent offenders are condemned for eternity. When Dante comes upon him, he learns that people who committed suicide are punished by being stuck in one place forever as a plant.

Pier della Vigna tells Dante, ''When the savage spirit quits/the body from which it has torn itself,/then Minos sends it to the seventh maw/. . . It rises as a sapling, a wild plant;/and then the Harpies, feeding on its leaves,/cause pain and for that pain provide a vent./Like other souls, we shall seek out the flesh/ that we have left, but none of us shall wear it;/it's not right for any man to have/what he himself has cast aside. We'll drag/our bodies here, they'll hang in this sad wood,/each on the stump of its vindictive shade.''

Sadly, for people who commit suicide, justice is served by planting them in one spot forever, and when God reunites them with their bodies, he puts them where they can be seen but never reached. This is the punishment for not taking care of the body in life. Justice is served by restoring balance; it possesses an ''eye for an eye'' mentality.

Punished by the Same Sin

In hell, justice is served by treating some sinners with a punishment that resembles the crime they committed while alive. For example, the sinners in the eighth circle are forced to relive the pain they caused in the physical world. Dante says, ''naked sinners moved. . . Both left and right, along the somber rock,/I saw horned demons with enormous whips,/who lashed those spirits cruelly from behind.''

These sinners pay for their crimes by being physically tortured into doing what the demons want them to do.

In Dante's hell, justice is fair and honest. It's also painful. For people who have committed lustful sins in life, they must endure their lack of restraint in hell by never being able to stand still, even for a moment. Dante says, ''The hellish hurricane, which never rests,/drives on the spirits with its violence:/wheeling and pounding, it harasses them./When they come up against the ruined slope,/then there are cries and wailing and lament,/and there they curse the force of the divine./I learned that those who undergo this torment/are damned because they sinned within the flesh,/subjecting reason to the rule of lust.''

Sinners of lust have zero control over their spirits in hell much like they couldn't control their physical desires in life. Again, we see how justice is painted as a balancing force. It's also depicted as painful because the spirits are never allowed a moment's rest; they move like a hurricane with no direct path.

Dante Alighieri's Inferno is the tale of Dante's journey through hell. On his journey with Virgil, he witnesses many spirits in the different circles of hell. He sees how justice is served by the sinners. Dante learns that justice is about being fair and equal, which means that a crime committed in life has a reasonable punishment in death. Sometimes, the punishment is the exact same sin committed in life and sometimes, it's a punishment that fits the crime. For example, a person who committed suicide is forced to be stuck in one spot in hell forever and is never allowed to be reunited with the body in the afterlife. The ultimate lesson Dante learns about justice is that there must be balance; whatever sin is done in life must be balanced out by a punishment in hell.