Lynn has a BS and MS in biology and has taught many college biology courses.

Some people with chromosomal disorders may have too many or too few chromosomes in their cells. A karyotype analysis can be used to look at the number and appearance of chromosomes in individuals. Keep reading to learn more.
Create an account

What is a Karyotype?

Most living things have chromosomes, or units of genetic information, in their cells. The number and appearance of chromosomes vary among species. A karyotype is the number, size, and shape of chromosomes in an organism. To determine the karyotype of an organism, scientists must follow these steps: 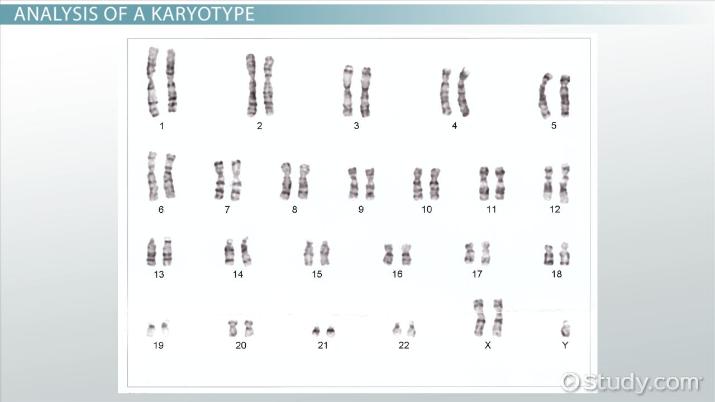 Coming up next: Kinetochore: Definition & Structure

Analysis of a Karyotype

It is often easier to understand a karyotype if a picture is taken. A karyogram is a photograph of an organism's chromosomes, in which the chromosomes have been sorted and arranged by size.

Humans have a total of 46 chromosomes (23 from each parent), which you can see in the karyograms. In karyograms, homologous chromosomes, or pairs of chromosomes that are the same size and shape, are grouped together. Humans have 22 of these pairs called autosomes.

Autosomes only account for 44 of your total chromosomes, so what are the other two? The remaining two chromosomes in humans are called sex chromosomes because they are the ones that determine whether you are male or female. They are placed after autosomes in a karyogram.

A karyotype analysis can be used to determine if individuals have abnormal numbers of chromosomes or abnormal-sized chromosomes. These abnormalities can be due to:

The number and appearance of chromosomes in a cell is called a karyotype. A karyotype can only be seen and studied with a microscope. To make karyotypes easier to understand, karyograms are often made. In karyograms, homologous chromosomes are put side by side and then arranged by size.

After you've finished, you should be able to:

DNA Sequences in the Human Genome

DNA Sequencing and the Human Genome