Kate Chopin was a Southern regionalist writer. Explore her biography, works, and style, and learn about the plot of her notable works and how her writing was significant in terms of Southern and feminist literature. Updated: 08/20/2021
Create an account

Kate Chopin, born in 1850 as Kate O'Flaherty, was a writer whose keen skills of observation led to an impressive ability to translate life into perceptive stories. Having been raised by women in St. Louis, Missouri during the Civil War and moving later as an adult to Louisiana, Chopin found that her own experiences as a self-reliant woman in the South made the best fodder for her work. These stories - colorful in description and bold in ideas - not only give the reader an insight into the region's customs and social structures but also offer a clear idea of the author's beliefs about individuality.

Chopin, a regionalist writer of the Realism movement, typically set her work in the South (Louisiana, specifically). Using vivid description, her works capture the local habits, language and characters that make the area unique and real. Interestingly enough, some would say that Chopin's writing style is not what made the biggest impact on the 19th century literary world. Rather, it was her depiction of thoughtful women, searching for a purpose beyond the confines of married life and beyond the expectations of the family that made her work remarkable. While her 19th century American audiences found her ideas direct and unsettling, Chopin has gained an identity in the decades since as a brave writer who explored themes like marriage, sexuality and identity in her work. 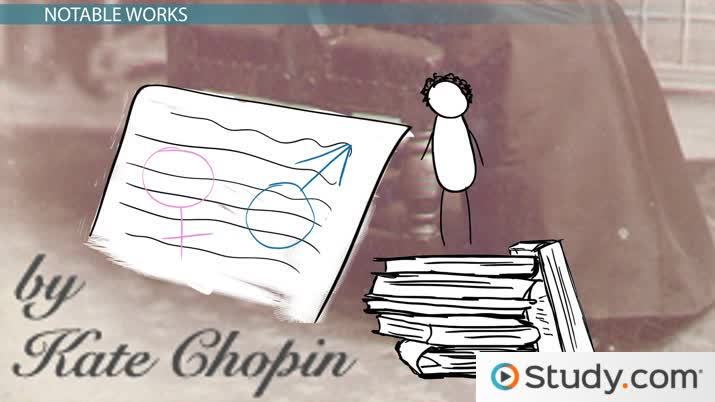 Coming up next: Kate Chopin's The Awakening: Summary and Analysis

Emergence of a Feminist Voice

Chopin was the daughter of an Irish immigrant father and French mother and spent most of her childhood attending a Catholic boarding school in St. Louis. The third of five children, she excelled in school, received awards and even delivered her commencement address at her high school graduation. Sadly, Chopin learned of loss early on when her father died in a train accident, and her half-brother passed away in the war. In fact, Chopin was the only one of five children to live past the age of 25. So, Kate was raised by her mother, grandmother and great-grandmother - all of whom were intelligent and strong women, who had themselves, at one point, run family businesses and raised children on their own. No doubt this influence supported Chopin's growth as an independent and self-sufficient woman.

Chopin married Oscar, a middleman in the cotton business, when she was 20. The couple moved to New Orleans (which became an important part of many of her literary works), where Oscar was able to run his business. By the age of 28, she had given birth to six children, and the couple seemed happy. It was clear that Oscar loved his wife and gave her more freedom than most husbands of his time. Unfortunately, their financial situation took a turn for the worse, and the family moved to a small Louisiana town - Cloutierville - in order to support themselves by managing a plantation and a store. Within three years of their move, Oscar contracted malaria and died. Left to fend for herself and her children, Chopin ran the store and the plantation for about a year before deciding to move back to St. Louis to be near her mother. When her mother passed away soon thereafter, Chopin turned to writing, both as therapy after her devastating losses and as a way to support her family.

Chopin found almost immediate fame as a local writer and women's interest author. She published short stories and articles in notable periodicals like The Atlantic Monthly, Vogue and the St. Louis Post- Dispatch in 1889. And by 1890, she had finished her first novel, At Fault, set in the Louisiana bayou. Two collections of short stories followed that not only explored life in Louisiana, but also challenged traditional concepts of gender roles through the eyes of the female protagonist.

'The Story of an Hour' is Chopin's most famous short story. This story captures the emotions of the female protagonist after she hears of her husband's supposed death in a railroad accident. While she is sad and identifies this as a time for mourning, the protagonist is surprised that she also feels an unexpected freedom. She sees that she can have a life beyond his death - one that is dictated by her own desires and decisions.

The Awakening is Chopin's final work and most widely read novel. Valued now as an iconic work in the Southern literary tradition (as well as an early work of feminist literature), The Awakening features a female protagonist as she struggles with identity, love and responsibility as a married woman. In the story, Chopin illustrates the internal tension between the sexual female and the mother, the passionate woman and the devoted wife, and highlights the ways in which these identities cannot exist together in the protagonist's very real traditional world. Chopin was surprised by the controversy it caused when many felt that Chopin was too frank and too bold in her descriptions, subject matter and outright challenge of traditional gender roles. The reviews were unfavorable, and the public's reception of the novel personally saddened her. The Awakening was the last major work that she wrote before she died in 1904 at the age of 54.

Kate Chopin was a regionalist writer whose stories take place in the South - most often in Louisiana. Throughout her work, Chopin depicts strong, independent women who question their own conformity to traditional gender roles and behavior. Many believe that this came from Chopin's own experience as a child, growing up in a house of similarly strong women, as well as her experience as an adult who lost her husband and had to support her family on her own.

Chopin's direct and perceptive style earned her a reputation as a narrative master, while her subject matter, most specifically in The Awakening, initially caused controversy. It wasn't until the late 20th century that Chopin's work was re-examined for its historical value and insight into a woman's struggle. As a result, and because of the context in which she wrote, it is now obvious that Kate Chopin's ideas about individuality and gender secured her position as one of the first feminist writers in our literary tradition.

The House of the Seven Gables: Themes & Analysis

The Story of an Hour by Kate Chopin |Summary & Analysis

The Story of an Hour: Theme & Symbolism