Kate Chopin's Story of an Hour tells the story of a woman who discovers another shocking twist in her life after processing the news of her husband's death. Discover the story of this woman and what realizations Chopin's story gives to its readers. Updated: 08/25/2021
Create an account

The Story of an Hour, a short story written by Kate Chopin, is truly a reflection of the writer's life experiences and attitudes about women and independence. Kate Chopin, a regionalist writer who focused much of her work in Louisiana, was raised by strong women who taught her about self-reliance and perseverance. When her own husband died young, leaving her with six children of her own to support, she turned to what she knew would be a therapeutic activity - writing. Successful and controversial, her stories reflect an honest challenge of traditional gender roles and a questioning of social conventions. Why must a woman's existence depend upon her relationship with the men around her? Such questions were often the driving force behind many of her works.

It was not intended that The Story of an Hour become such a well-known example of early feminist literature in the U.S. Rather, Chopin meant to reflect in her writing her own struggles with identity and thoughts about marriage, family, love and sexuality. What she explores in The Story of an Hour is one woman's process of dealing with death, specifically, the death of her husband. What is surprising (and probably quite shocking to her early readers) is the character's realization of what his death means to her. 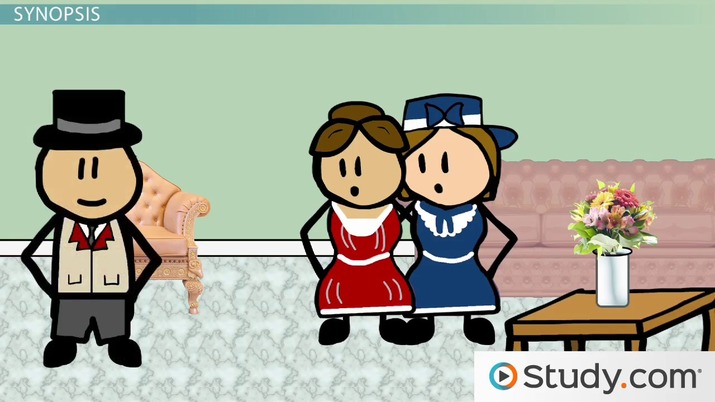 Coming up next: The Yellow Wallpaper by Charlotte Perkins Gilman: Summary & Analysis

Louise Mallard is home with her sister Josephine when they hear of a terrible train accident. A friend comes to report to them that Louise's husband, Brently Mallard, has been killed in the wreck. Louise sobs with grief for a time before requesting to be alone and retreating to her room, where she tries to process the news. While it is clear that there is sadness, Louise feels another emotion building. She knows that at times her husband was a good, loving man. She knows that she will cry again for him. But what she soon recognizes in herself is an overwhelming sense of relief. She feels freedom and joy in the way that she will be able to make her own life going forward, led by her own desires and decisions. She looks forward to life alone.

After some time, and at the urging of Josephine, Louise opens the door to find comfort with her sister. Soon thereafter, someone is heard at the front door turning the lock, turning the handle, opening the door. It is Brently. He is alive and was nowhere near the train wreck when it occurred. Josephine screams. Louise collapses and dies of shock, which doctors later claim was a heart attack brought on by joy.

The Story of an Hour is, among other things, a reflection of the idea that marriage is confining and limiting for women. It is Louise's reaction to her husband's death, her new freedom and renewed excitement about life that illustrate to the reader that her previous existence was one in which she had no freedom, no excitement, no interest in the uncertainties that lie ahead. There is also this sense that it was unacceptable for her to feel this way - to have an interest in driving her own future or to have any kind of joy in being alone, or living for oneself. This is a common thread that runs through many of Chopin's stories.

Louise's death is interpreted in a very specific way in the end. The doctors say that it was the joyful shock of seeing her husband that killed her. But as readers, we know that it was the sight of him and what that meant: Her happiness, her freedom and all that she was hopeful for was gone. There was no joy in her death but rather the reality that independence would not be hers as long as her husband was alive. It is clear why The Story of an Hour is considered an early piece of feminist literature. Chopin deals with a woman searching for her own identity and independence away from her husband. She feels as though life with him is gloomy, whereas an existence of her own making would create in her a sense of joy and excitement that she had never felt before.

The Story of an Hour is a short story written by regionalist writer Kate Chopin. In it, the author creates a character that must process the news of her husband's death. To her surprise, after the initial waves of grief have passed, this woman feels a sense of relief, joy and freedom. She realizes that her life with her husband in her marriage was oppressive. Happy and ready to face this new existence, all of her hopes are dashed when her husband arrives home unharmed. The character is dismayed and shocked and dies of a heart attack. Considered an early work of feminist literature, this story tackles concepts that were controversial at the time: the idea that marriage was oppressive and women often longed for independence. This stands as Kate Chopin's most widely read short story. It was even adapted into a 1984 film under the title The Joy That Kills.

After this lesson you should be able to summarize and analyze Chopin's The Story of an Hour.

The Story of an Hour by Kate Chopin | Setting, Plot & Characters

The Story of an Hour by Kate Chopin | Overview, Themes, & Symbolism

A Jury of Her Peers by Susan Glaspell | Summary, Analysis & Theme

Out, Out- by Robert Frost | Summary, Theme & Analysis