'The Awakening' was criticized tremendously because of its unusual theme of a rebellious woman whose desires and actions in contrary to society's expectations of a woman. Discover the controversy around the novel's publication, its summary and analysis, and the influence of 'The Awakening' on feminist literature. Updated: 08/28/2021
Create an account

The Awakening is a novel by regionalist writer Kate Chopin. Noted as one of the first feminist works in American literature, the story centers around one woman's transformation from traditional housewife and mother to an individual with a sense of self-awareness and an independent purpose beyond her family.

When first published, The Awakening was quite controversial, because of the way the story questioned gender norms and social traditions and weaved in the topic of female sexuality, to the shock of her 19th century readers. Motivated by the author's own experiences as an educated and self-reliant woman, the novel garnered terrible reviews. In spite of this initial poor reception, The Awakening, which was Chopin's last novel, ultimately became her most influential. It was basically re-discovered in the late 20th century, bringing Chopin attention as a remarkable storyteller and feminist writer. 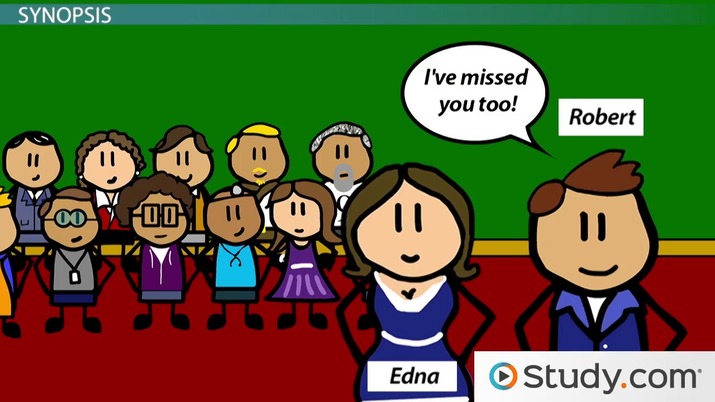 Coming up next: Kate Chopin's 'Story of an Hour': Summary and Analysis

Like in many of her other stories, Kate Chopin sets The Awakening in two Louisiana locales - Grand Isle and New Orleans. It is in the seaside town of Grand Isle that the story begins. The Pontellier family, consisting of mother and wife Edna, husband and father Léonce and their two sons, vacation together in a resort run by Madame Lebrun and her two sons Robert and Victor. It is clear that Edna and Léonce have a traditional marriage, one in which it is expected that Edna care for her children and husband, rather than follow her own pursuits. It is clear, at times, that Léonce is not satisfied with Edna's level of effort with their boys and feels that she is not like the other mothers around them. Edna, herself, feels as though there is some sense of dissatisfaction growing within her.

Léonce must leave his wife and sons in Grand Isle for a weeklong business trip. During this time, Robert Lebrun (who is young and handsome of course) and Edna spend time together, and Edna falls in love. Without her husband and with this new kind of attention, Edna feels different - more alive, self-reliant and independent. Before any affair begins between the two, Robert senses that the relationship would be pointless, since Edna is a married woman. He leaves Grand Isle abruptly for what he describes as a business venture in Mexico. Edna is terribly sad when Robert gives little explanation.

The Pontellier family returns to their home in New Orleans, but Edna's behavior has changed. She no longer fulfills social obligations or supports her husband the way she once did. She begins to focus on artwork and other pursuits that she enjoys. Léonce becomes concerned and consults a doctor who believes that if she is left alone she will most likely be fine. Léonce leaves his wife for a trip to New York while their sons go to spend some time with their grandmother.

Edna, alone now for the first time, considers her life, her freedom and her purpose. She thinks of Robert often. Her emotional state fluctuates. She begins an affair with a man nearby named Alcée. She feels too unattached to her house and all of her material possessions, so she moves temporarily into a smaller house down the street in her husband's absence. She hears about Robert's adventures in Mexico and finally runs into him at a mutual friend's house, where she finds out that he has been back in town for a few days. While cold at first, after some time, Robert admits that he thought about Edna the entire time and admits his love for her.

Just as Edna is freed by the news, she is called away to help a friend for a few hours. When she returns back to her small cottage, she finds a note from Robert. In it, he says goodbye and tells her that he loves her. Devastated, Edna chooses to return to Grand Isle where she and Robert first met. She thinks of her life, her husband, her children, and how her soul is not her own as she walks the beach. She considers all of those people who did not understand her or what she was feeling as she walks into the water. Exhausted, Edna lets the waters overtake her.

Kate Chopin created a story in which the main character, Edna, is a bit of a rebel. She breaks away from the role she knows she is supposed to take on - devoted wife and mother - and eventually focuses instead on her own interests (self-expression through art in this case) and her own sexual desires. Her deliberate move to create space between her and the traditional family life she had does create in her a sense of emotional turmoil - excitement, accompanied at times by a feeling of loneliness. Hers is a world where no one understands her needing an identity and passion that is completely her own.

When Robert cannot be with her because she's a married woman, Edna becomes very aware of the fact that even he cannot move beyond societal expectations. She feels utterly alone. When even her own children feel to her an enormous weight, she chooses to take her own life rather than live an existence of lies.

While Kate Chopin is one of those writers whose style became known as uniquely southern, her novel shocked readers. The masses did not focus on her insight into human behavior or the ways in which she created complicated stories of emotion within a world of societal conventions. Instead, they focused on the story of Edna's rebellion. It was uncomfortable to read about a woman who did not fulfill her wife and motherly duties. It was really uncomfortable to read about a woman's sexual desires; it was bold and frank and shocking.

Chopin's work was received poorly and many criticized the fact that, while her writing was impressive, its less-than-appropriate content seemed gratuitous. Chopin, saddened by the news (and feeling misunderstood herself) didn't publish much after The Awakening. Over a century later, the novel now takes its place as one of the most impressive works of feminist fiction in the United States.

Kate Chopin, a regionalist writer, set her novel The Awakening in New Orleans and Grand Isle, Louisiana. In it, we follow the transformation of the protagonist, Edna Pontellier, from a pleasant but numb housewife to a liberated woman who is able to express herself emotionally and sexually. She begins a life of her own choosing, but realizes pretty quickly that she will not find acceptance or companionship. Society is not ready for a woman so bold. Edna chooses to die rather than to feel imprisoned as a female in a traditional existence. She cannot be a 19th century wife or mother anymore.

The Awakening was not received well initially because of the nature of its content. In fact, while it was not on the banned book list, many agreed to stay away from it altogether. Chopin was discouraged by this and did not live to see of its eventual success or the legacy that she left behind. The Awakening is now known as one of the first works of feminist literature in our country.

After you've concluded this lesson, you'll be able to:

Literary Devices in The Awakening by Chopin

Hemingway's A Farewell to Arms: Summary and Analysis

To a Skylark by Shelley: Summary, Theme & Analysis