Principal figures in the Jewish religion's history include its founder, prophets, strong women, an uniter, and a preserver. Learn about and understand the central importance to the Jews of Abraham, Moses, Naomi, Ruth, King David, and Yohanan ben Zaccai, and their contributions to the development and preservation of Judaism and Hebrew history. Updated: 11/04/2021
Create an account

Like all great religions, Judaism traces its roots back to people who first explained the tenets of the religious tradition to the people. In Judaism, much like Christianity and Islam, these people are known as prophets because they were able to obtain messages straight from God. Judaism has several such prophets, although two of the most important are also two of the earliest.

Abraham is vital to the development of Judaism as he is really where the story began. Born somewhere around Ur in Mesopotamia, it was Abraham whom God addressed as the founder of His people. This was quite the claim because Abraham was already an old man by the time he became a prophet! Moreover, God asked Abraham to sacrifice his son, Isaac, to prove his faith. Abraham was willing to do so, placing his belief in God first, even though God prevented Abraham from actually killing his son. Abraham is so revered that Judaism, Christianity and Islam are often collectively referred to as Abrahamic religions, due to the important role he has in all three.

However, while the Jews may have descended from Abraham, he did not found Judaism as a belief system. Instead, that honor goes to Moses, a leader some centuries later who not only led the Israelites, as they were then called, out of Egypt but also gave them the system of laws that would set them apart from so much of the rest of the world. In fact, the famous Ten Commandments were among those introduced by Moses. Moses is held in the highest regard among Jewish people because it was he who not only protected the people but also gave them their identity. 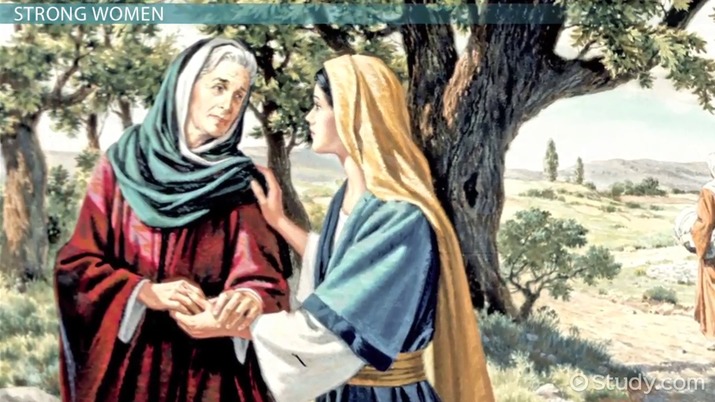 Coming up next: The Exodus & Other Movements of the Ancient Hebrew Peoples

Yet it isn't only men who are strong in the Jewish tradition. Ruth and Naomi emerge as examples of what it means to follow Jewish law as women. In fact, Ruth was originally not a Jew at all but actually converted to the religion after marrying Naomi's son. Then, tragedy struck, as the husbands of both Ruth and Naomi died, leaving both women as widows. This was a hard fate in ancient history because men were the ones who were considered economically responsible for families, while women were supposed to take care of the children.

What really sets Ruth apart is her loyalty to her mother-in-law. Famously, she said that she would not abandon her mother-in-law until the death of one of them. Naomi, too, was loyal to her daughter-in-law, and on at least one occasion, may have put her well-being ahead of adherence to the law. However, ultimately the two women were able to act justly and as real examples of women under Jewish law.

Yet, the greatest hero of Jewish history was neither its founder nor a woman. Instead, David began his life as a shepherd. However, he soon demonstrated his faith in God, by killing the great giant Goliath with little more than a sling and a few stones and ultimately became king of Israel and Judah, uniting the two halves of the Jewish world.

While king, it was clear that while David was a good ruler, he was not perfect because he made plenty of mistakes. However, he was a wise king, generally thought to have written the book of Psalms.

However, David's Kingdom of Israel and Judah was not to last, and with the approach of stronger empires, it soon became clear that Israel, too, would not exist as an independent society for much longer. The Babylonians under King Nebuchadnezzar soon destroyed the first temple and moved the Jews out of Israel. Upon their return by Cyrus the Great of Persia, the idea of such displacement never left the minds of many.

As a result, writing down much of the oral teachings of Judaism, known as the Oral Torah, or Mishnah, became a high priority. Yohanan ben Zaccai was foremost of those who wrote down the Mishnah for future generations. Within only decades of his death, the Jews were once again scattered across the known world, and it is unlikely that they would have survived as united as they have without the work of Yohanan ben Zaccai.

In this lesson, we took a look at some of the principle figures of Judaism. We discussed the roles of Abraham and Moses as founders of Judaism, as well as the role of such righteous women as Naomi and Ruth. Finally, we looked at the efforts of David to unite the people and Yohanan ben Zaccai to keep Judaism alive even as its followers spread across the world.

The Hebrews and Their Beliefs