French politicians have a certain procedure to follow when creating laws in France. In this lesson, explore this procedure, study the key principles of creating French laws and regulations, and examine French legislative acts, decrees, and legal authority. Updated: 10/11/2021
Create an account

As the old saying goes, 'everyone likes sausage, but no one likes to see how it gets made.' As I can personally attest, making sausage is not the prettiest of processes, but it's one that can lead to some fantastic summer cookouts. Similarly, not many people like to sit down on their couch for hours on end watching C-SPAN to see how law gets made. But again, it's an important process that keeps the machinery of government moving smoothly and brings new and better services to citizens, like you and me. In this lesson, we'll discover some of the guiding principles and rules of French law and how it gets made. 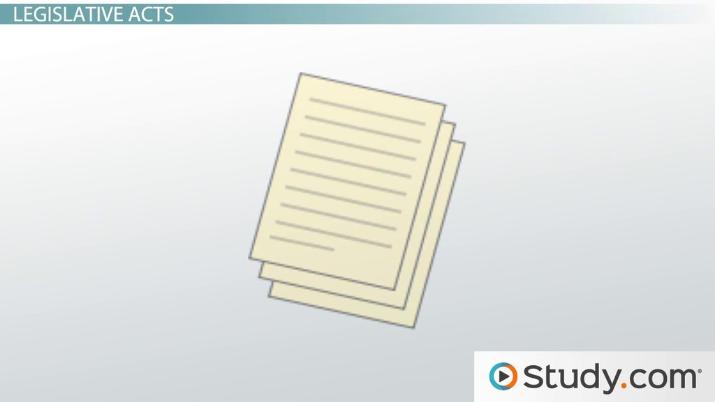 Coming up next: The Jurisdictions & Roles of French Local Government

The laws with which you are most likely familiar are made through a legislative process. However, in France, the legislative process is different than our own. This is largely because the French president is much more powerful than the French legislature, whereas in our system, the powers are more evenly balanced. In France, for the longest time only the government (that is, the executive branch) could submit bills to Parliament. Recently, however, that has changed, and individual members of both the Senate and the National Assembly - the two houses of the French Parliament - may submit their own bills for consideration.

Most types of bills can begin their process toward law in either house. However, any finance bills or any bills dealing with the French social security system must first be dealt with by the National Assembly before they can move on to the Senate. When a bill reaches either house, the bill is sent to a standing committee where members of Parliament, or MPs, debate the merits of the bill and call witnesses to testify to the bill's possible impact. Both before and after this process, members may submit amendments to the bill as they see fit. The government may also submit an amendment to a bill being considered by either house.

If after this process, both houses arrive at identical bills, great! The bill very quickly becomes an act of Parliament. However, this almost never occurs. More likely, both houses will arrive at bills with disagreements over wording, scope, or size, depending on the bill's subject matter. Then the bill goes through a process known as the shuttle. The Senate and National Assembly take turns reading each other's bills and debating the merits of each disagreeing clause, and hopefully find a suitable compromise. This continues until the bill is agreed upon by both houses or the government stops the shuttle, which it is empowered to do after two rounds of reading.

If the government puts a stop to the shuttle, the Prime Minister calls a Joint Mediation Committee, made up of seven members of each house. This Committee is in charge of creating a compromise. If the Committee fails in its duty, the government can order several more readings before allowing the National Assembly to have the final word. Fortunately, it rarely comes to this final tiebreaker, and only about 10% of bills since 1958 have required this final solution.

This sometimes-arduous process is not the only way French law is made. French law can also be made by presidential decree, or an order issued unilaterally by the French president or executive branch. The French president can do various things by decree. For example, appointing his Cabinet ministers and prime ministers are always accomplished by decree, and the dissolution of the National Assembly is often done by decree.

Though in theory the president may make any decree that suits him or her, in reality, he or she is far more constrained by French law. For example, all decrees have to be constitutionally sound. In addition, they may not contravene previous laws passed through Parliament. If any presidential decree breaches Constitutional law or earlier parliamentary law, they can be annulled by either the judiciary's Council of State or the special Constitutional Council.

As one might guess from the previous section, the French Constitution is held nearly as sacred in France as the U.S. Constitution is here. Indeed, it is the highest authority in French law. All presidential decrees and parliamentary acts have to observe its principles, and all French judges are supposed to look first to the Constitution when making rulings.

The hierarchy of legal authority after the Constitution is unique in France. For example, European Union law, treaties, and other regulations are considered the second most important legal authority in France. After this, French law is ruled by organic laws. These are laws that have been created by Parliament or the government, but which have also been analyzed by the Constitutional Council and have been guaranteed as having the force of the Constitution behind them. Ordinary parliamentary law comes after that on the ladder of French legal authority, and presidential decrees below that; hence, why all presidential decrees must not contravene parliamentary or constitutional law. Finally, there are the laws and regulations made by local authorities or specialized law created by agencies that pertain to specific subjects, like financial or food handling regulations.

The processes that create French laws can seem complicated, but they are integral to governing the country. Legislative acts can be introduced by either the government or private members, and the legislative branch's two houses - the National Assembly and the Senate must eventually arrive at the same version of the bill whether through compromise or mediation. Presidential decrees require far less legal wrangling; indeed, the president simply announces he or she is making a decree, and his or her word is law. However, these decrees must conform to the laws and statutes of the French Constitution and previous parliamentary law. If they don't, they will be struck down. This is partially because the Constitution in France is the highest law in the land. France is also unique in the importance placed upon European Union law; indeed, EU law outranks everything but the French Constitution.