Living organisms that aren't plants or animals make up the kingdom Fungi. Learn how to define Fungi, explore the kingdom's characteristics, and review some examples of Fungi. Updated: 10/28/2021
Create an account

What do mushrooms, bread, wine, beer, and rotting organisms all have in common? It is obvious that some are edible while others are not. Mushrooms are found in nature, while wine and beer are clearly beverages processed by humans. As for rotting organisms, those typically aren't of much interest to most people. However, all of these examples have a common thread: the kingdom Fungi.

The kingdom Fungi includes a tremendous variety of organisms that are neither plant nor animal. These unique multicellular eukaryotes include edible examples like mushrooms and organisms such as yeast, which makes our bread rise and ferments our beer and wine. And their impact on our world as decomposers is absolutely crucial to every ecosystem. In this lesson, you'll learn more about the members of the kingdom Fungi and gain a better understanding of how fungi function in our world. 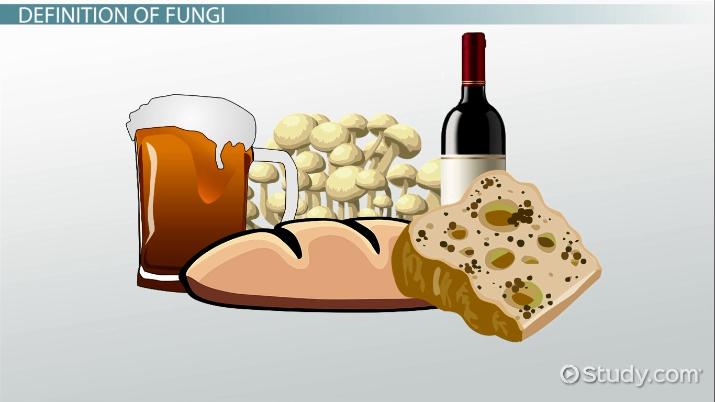 Try it now
Back
Coming up next: Animal Body Plans: Classifications and Features

Characteristics of the Kingdom Fungi

As previously mentioned, the kingdom Fungi encompasses a wide variety of living organisms. Scientists estimate that there are hundreds of thousands of fungus species on Earth. At one time, it was thought that fungi were simply primitive versions of plants. However, further discoveries led to the realization that fungi were different enough to belong to their very own kingdom. Let's take a look at some of the common characteristics of these organisms.

Members of the kingdom Fungi are eukaryotes, meaning they have complex cells with a nucleus and organelles. Most are multicellular, with the exception of single-celled yeast. Structurally, fungi are made up of individual feathery filaments called hyphae. You have certainly observed these filaments, probably with disgust, if you've ever pulled out an old Tupperware of food from the refrigerator.

The hyphae group together to form a conglomerate called the mycelium. You may notice that when you cut into a mushroom, it has a spongy feel. This is because it is actually made up of a mass of very tightly packed hyphae, and thus, is not exactly solid.

All fungi are heterotrophic, meaning that they cannot make their own food like plants. Like us, they must gain nutrition from other organisms. So they seek out food sources and eat them, correct? Not exactly. Have you ever seen a mushroom hunting its dinner? Instead, like a parasite inside a body, they grow on organisms and absorb their nutrients.

As an example, let's think about our faithful kitchen friend who we previously mentioned in the Tupperware. One day, you have a container of ripe, plump strawberries. After they sit out for several days, you notice the white fuzz of mold begin to appear. If you dare to touch a moldy berry, you are lucky if your finger doesn't sink right through the mushy skin. But why has it turned so soft?

Fungi release enzymes that essentially digest the food that they are attached to. Once the organism is broken down by the enzymes, the fungi is able to simply absorb the nutrients to live. If you venture out into a damp forest, you will most certainly find mushrooms growing on fallen trees or dead leaves. Again, the mushrooms have released enzymes that make it possible for them to live off these other organisms by absorbing their nutrients.

Here's another question: how do fungi just happen to end up living on these food sources? Do the baby mushrooms travel through the woods to find dead trees on which to attach? Does the mold fly into our kitchen, searching for old food? Hardly. So where do they come from? The answer lies in tiny microscopic reproductive structures known as spores.

Fungi release spores into the air in order to reproduce. Unseen by our eyes, these tiny airborne bodies catch wind currents and travel by the millions. Sometimes they hit the jackpot, and land on a moist food source. At that point, they germinate and begin to grow. That explains why mold seems to suddenly appear on our food.

Now, it may seem like some fungi are simply nuisances. Many appear to be opportunistic parasites that spoil our food when given the chance. However, this process of decomposing living organisms is absolutely necessary in our world. Imagine what would happen if nothing decomposed. We would find our earth littered with dead corpses and waste products! Most importantly, decomposition releases organic molecules back to the earth to be used again. This recycling of elements is essential to the survival of ecosystems and life on Earth.

There are several main divisions of the kingdom Fungi. We have already mentioned mold, which belong to division Zygomycota. We may be most familiar with Rhizopus stolonifer, or black bread mold. It is a popular decomposer found in many kitchens.

Division Ascomycota includes many parasitic fungi that cause plant diseases, but also includes delicacies such as truffles and morels. Basidiomycota is the division that encompasses mushrooms and other mushroom-like organisms such as puffballs and stinkhorns. And Deuteromycota are known as 'imperfect fungi' because they don't quite fit the standard characteristics of fungi. An example is Penicillium, from which the antibiotic penicillin is derived.

The kingdom Fungi includes a vast variety of organisms such as mushrooms, yeast, and mold, made up of feathery filaments called hyphae (collectively called mycelium). Fungi are multicellular (mostly) and eukaryotic. They are also heterotrophs, and gain nutrition through absorption. Fungi reproduce by releasing spores into the air. They work as decomposers, releasing elements back into the earth.

Equipped with knowledge, see how well you can:

Protists Facts, Benefits & Importance | What do Protists do?