Kristen has been an educator for 25+ years - as a classroom teacher, a school administrator, and a university instructor. She holds a doctorate in Education Leadership.

L1 refers to an individual's first language that they learned as a child and L2 refers to a second language that a person may learn. Explore L1 and L2 literacy development and review the stages of development, the influence of L1 on L2, and potential challenges in this process. Updated: 01/13/2022
Create an account

If you're trying to acquire a new language, whether for fun or out of necessity, you'll discover that second language learning comes with many difficulties that must be overcome. Language develops in stages, and these stages are different for the first language and the second. Let's take a close look at these stages. 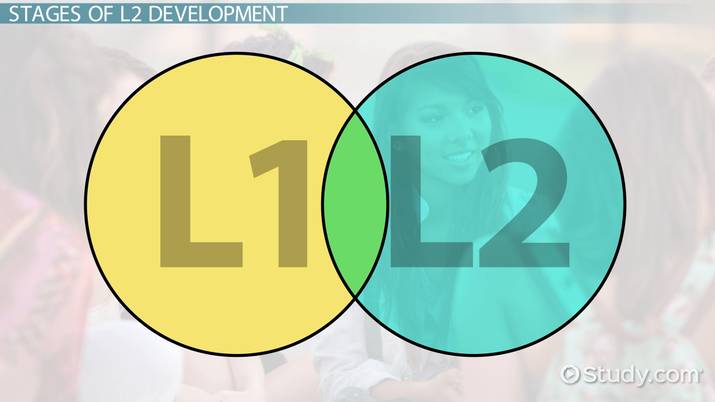 Try it now
Back
Coming up next: Culture: Definition & Meaning

L1 refers to a person's first language. It's the language most prevalent in the home as learners are growing up and the first language used for communication. There are several stages in the development of L1 that virtually all children will go through as they learn to use the language. These stages include:

L2 refers to a second language. This is a language that 's learned after and in addition to L1. Just like with L1, L2 develops in stages, including:

Influence of L1 on L2

Let's now look at how one language, in this case L1, can influence another language, namely L2. L1 can have both significant positive and negative influences on the development of L2.

When learning a second language, it is not uncommon for rules of grammar, syntax, and mechanics to transfer from L1 to L2. Once these rules have been mastered in a first language, they can often be transferred to a second language. This is called language transfer and is common between most languages. Also, depending on the languages in question, many of the basic phonemes and letter/sound relationships are comparable enough to also transfer from one language to the next.

L2 development is never easy and, in many cases, L1 can get in the way of the development of L2. In some cases, language transfer gets muddled, causing more of a misunderstanding than anything. Learners often have a hard time switching from one language to another and can sometimes confuse parts of each language. Confusion between languages is especially common when the learner is trying to achieve complete mastery of L2.

Unfortunately, learning a second language isn't easy. There are several challenges that might get in the way. As noted, for example, a person's first language can easily get in the way of their second. There will often be a natural tendency to revert back to L1 when trying to communicate in L2, and, at times, language transfer isn't as smooth as one would like it to be.

In addition, in some cases, L2 learners become dependent on others to help them as they struggle to learn the language. This dependency can slow their learning and decrease their understanding of L2. It's also worth noting that some learners adapting to a new language must also adapt to an entirely new culture at the same time (if, for example, they have moved to a place where the new language is spoken). Often times, this becomes a challenge as they learn the new language.

The stages of development of L1 include:

L2 stages of development include:

As L2 is learned, L1 can have both positive and negative influences on its development. Other challenges that might affect the development of L2 include the tendency to revert back to L1, dependency on others, and a new culture.

How Are ELL Students Identified?

How to Assess the Cultural Background & Experiences of ELL Students

How Are ELL Students Identified?

How to Assess the Cultural Background & Experiences of ELL Students