Learn about the history and meaning behind the holiday of Labor Day in the United States. Learn about the involvement of labor unions and how it is celebrated today. Updated: 11/09/2022
Create an account

The Development of Labor Unions

You may think that your eight-hour workday drags on forever, and the occasional 10- and 12-hour shifts you have to work are inhumane. It isn't so bad though. Many employees do get extra pay for working anything beyond a 40-hour work week, and employers are required by law to provide a safe work environment.

Back in the 1860s, there was no regulation about how long people could work. They might work 16 hours a day, six days a week if their employer demanded it. And if an exhausted worker lost a finger or was killed, there was no compensation. The family was given the money he had earned up until the accident, and that was that.

Labor unions would change all that. By organizing workers, labor unions were able to leverage companies and eventually the government into giving the workers shorter hours, better pay, and protection against job injuries. There were a lot of bumps along the way: strikes, riots, a few deaths, and many injuries. The Haymarket Massacre of 1886 was probably the worst, where 11 people died after a bomb was thrown at police during what was supposed to be a peaceful protest for an eight-hour workday.

But things got better. Eventually, workers' wages went up, and the hours and danger level at their jobs went down. The workers naturally celebrated their successes. The first Labor Day parade was on September 5, 1882. 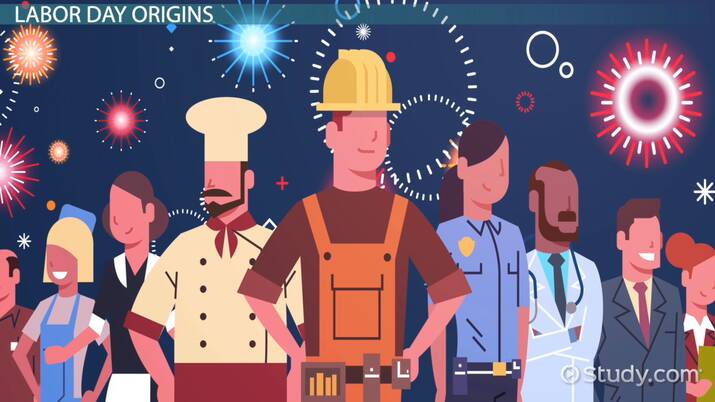 Try it now
Back
Coming up next: Alonzo Herndon: Biography & Explanation

The parade wasn't official, but it was extremely popular. It wasn't long before the idea of a Labor Day celebration caught on. No one really knows who came up with it first, maybe Peter J. McGuire, cofounder of the American Federation of Labor, or Matthew Maguire, a secretary of the Central Labor Union, thought of it. Maybe it was someone else.

The important thing was that labor unions all over the country were soon suggesting it. Eventually, a few states got into the act, too, starting with Oregon. Finally, in 1894, President Grover Cleveland declared Labor Day a national holiday. Labor Day has become a way to celebrate the successes of labor unions in the United States and raise awareness.

The US wasn't the only country in the world to celebrate Labor Day. Throughout the world, there are about 80 countries that have a similar holiday, often called International Workers' Day, and almost all of them celebrate it on May 1 each year.

Since Labor Day is a legal holiday, many federal employees have the day off, and many businesses close their doors, too. The main event is usually a local parade with representatives from the local businesses and unions. Some larger towns and cities follow this up with a speech or two. The rest of the day is traditionally spent with picnics, hamburgers, hot dogs, and chips.

Today, Labor Day also signifies the end of summer. College football kicks off on Labor Day, while the NFL season starts on the following Thursday. Schoolchildren don't exactly celebrate their return to school, but that happens around Labor Day as well.

And ironically, Labor Day in the US has become a big day for retail sales. That means that anyone in retail usually works, and works longer hours. Although that group of people represents a good portion of labor in the country, less than 5% of them are part of a union!

Labor Day recognizes the contributions that American workers have made to the country and the progress that labor unions have made in giving workers fewer hours, better working conditions, and higher pay. Labor unions were able to leverage companies and eventually the government into better job conditions. Though the first Labor Day celebration was in 1882, the first national holiday was in 1894. Today, many people get the day off of work to enjoy the local parade and go out for a picnic (unless they work retail!).