A lagging strand is the name for one of the two DNA strands in a double helix that is undergoing replication. This lesson will explain which strand is lagging and how it is replicated.
Create an account 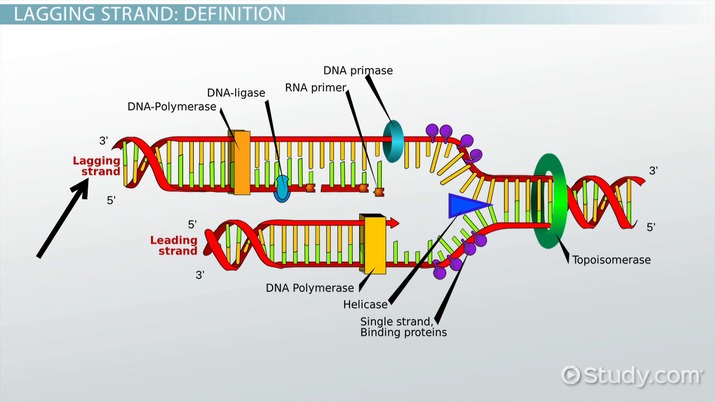 DNA, or deoxyribonucleic acid, is a complex molecule, typically found in a cell's nucleus, that contains an organism's genetic information. The two strands of DNA form a double helix. The strands are complementary because they contain matching base pairs of the four chemicals found in DNA.

One end of a DNA strand is not the same as the other. One end contains a 5' phosphate group, and the other contains a 3' hydroxyl group. Biologists refer to the two ends of a DNA strand as 5' and 3'. In the double helix structure, the two strands point in opposite directions, with the 5' end of one strand paired with the 3' end of the other strand and vice versa.

DNA replication begins when the DNA double helix unwinds. The open region containing the separated DNA strands is called the replication bubble. Imagine a replication bubble where the top strand has its 5' end on the left and its 3' end on its right. The bottom strand will have an opposite orientation, with 3' on the left side and 5' on the right side.

Let's stop at this point and take a look at our replication bubble.

Each side of a replication bubble is called a replication fork because the DNA helix splits into two strands, like a fork. The polymerase on the top strand moves to the left, and as it reaches the replication fork, the DNA magically unwinds ahead of it so it can proceed without stopping. The strands that can replicate continuously are called the leading strands.

But, what about the bottom strand on the left and the upper strand on the right? These strands are lagging strands. Obviously, this DNA needs to undergo replication, but it's not that simple. Remember, our polymerase can only move towards the left on the top strand and towards the right on the bottom strand. So, the original polymerase will be unable to reverse direction and replicate these bits.

To replicate the lagging strands requires the help of a new polymerase. For example, at the left replication fork, a polymerase will come in on the bottom strand and zip along towards the right. Of course, it will not have much DNA to zip along because it will soon reach the portion that was already replicated by the original polymerase that is continuously chugging along towards the right.

As the polymerase on the leading strand causes the DNA to further unwind, more lagging strand is exposed. The lag time that occurs while the DNA is unwinding explains its name, lagging strand. When enough DNA has unwound, another polymerase will come in and replicate another little chunk on the lagging strand. These chunks of DNA are called Okazaki fragments. Eventually, they all join together in one smooth strand of DNA.

When DNA replicates, it must unwind at a replication fork, found on either side of a replication bubble. One strand can replicate continuously, the leading strand, but the lagging strand must be replicated in chunks of DNA called Okazaki fragments. Replication requires the use of different methods because DNA polymerase, an enzyme that builds new DNA strands, can only build DNA by adding bases to the 3' side. The lagging strand needs to wait for the DNA to unwind a bit before a polymerase can jump in and replicate another chunk.