The structure and biodiversity of a landscape are the primary focus of the study of landscape ecology. In this lesson, learn how spatial arrangements like fragmentation, edges, and corridors affect biodiversity and ecological processes over time. Updated: 11/09/2021
Create an account

Mary is an ecologist who specializes in landscape ecology, the science and study of how spatial arrangements of habitats affect ecological processes, the abundance of organisms, and the distribution of these organisms. Basically, Mary tries to figure out the effects of spatial patterns on ecological processes over time. Today, she's going to show us how fragmentation, edges, and corridors play a role in all of this. 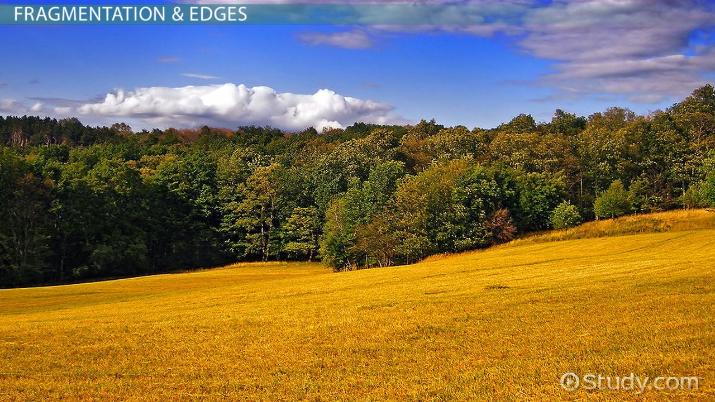 The biodiversity in a landscape is heavily influenced by the structure of the landscape itself. Mary first takes us to the savannah to see why.

Here, the open structure of the savannah allows everything from zebras to lions to thrive. But then, Mary takes us to the rainforest, where we do not see any zebras nor do we see any lions.

This is because the structure and function of the landscape has changed, and thus, the biodiversity of this landscape is different as well.

While that was a clear example of two different landscapes and the unique biodiversity therein, we need to also understand that many species depend on more than one kind of ecosystem and many live on borders between ecosystems. This is why understanding the connections between landscape structure, biodiversity, and conservation is important.

To help clarify this point, Mary takes us to open fields running right alongside a forest. She has just taken us to an edge.

Boundaries between ecosystems are called edges. Edges have their own unique sets of physical conditions that are different from those found on either side of the edge, and these conditions set up areas where certain species can thrive.

For example, white-tailed deer love edge habitats because they can feast on the woody shrubs found in these areas. So the more we log and fragment forests into smaller and smaller pieces separate from one another, the more edges we create, and deer populations tend to expand in these areas.

You'd think that's great! We're increasing the deer population - hurray! But creating edges as a result of human alteration causes reduced biodiversity, and not just as a result of the obvious habitat loss.

To prove this point, Mary points out a bird flying overhead near the edge of the forest we're at. It's a brown-headed cowbird. Mary explains that the cowbird is an edge-adapted species that lays its eggs in the nests of migratory songbirds. The cowbirds need the forest to parasitize the nests of other birds in which they lay their eggs, but they also need the open fields next to the forest to eat. That's why cowbird populations flourish in edge habitats at the expense of the destruction of their host species. This is just one example of why human alterations reduce biodiversity while also increasing the number of edge-adapted species.

The more we fragment a landscape, the more the species adapted to the interior of the habitat decline in number, as they have smaller and smaller patches of space to live within. It's like a shrinking home - sooner or later, the more it shrinks, the less interior space we have to live within it. We'll be forced out, we'll become homeless, and we'll have a smaller chance for long-term survival without a place for shelter and a place to eat and sleep.

Mary points out that one important thing we can do to conserve biodiversity in the fragmented habitats is to establish wildlife (movement) corridors, an area of habitat, such as a narrow strip, which connects otherwise isolated patches of habitat that may be separated by human structures and activities like logging.

Mary takes us to an example of one such corridor, known as a riparian habitat, which is the interface between where land meets a river or stream.

Wildlife can use these areas to move around between two fragmented habitats.

Next, Mary takes us to an overpass.

Sometimes, artificial bridges, overpasses, or tunnels are built for animals trying to get from one habitat fragment to another. That way, they won't be killed trying to cross a highway.

These corridors serve another function: the reduction of inbreeding and the promotion of genetic diversity. If individuals can travel from one fragment to another, then this obviously allows for better genetic exchange.

Thank goodness we have people like Mary specializing in landscape ecology, the science and study of how spatial arrangements of habitats affect ecological processes, the abundance of organisms, and the distribution of these organisms.

By fragmenting landscapes, we not only destroy habitats and the species that depend on these habitats, we also create a lot of edges, or boundaries between ecosystems. Although some kinds of species thrive in edge habitats, they're often different from those that live within a habitat, and this ultimately can lead to reduced biodiversity.

Fragmentation makes it difficult for animals to intermingle with one another. This also reduces biodiversity and causes inbreeding. To try and help resolve this issue, we can establish wildlife (movement) corridors, an area of habitat, such as a narrow strip, which connects otherwise isolated patches of habitat. Examples of corridors include tunnels, bridges, and riparian zones.

As your understanding of this lesson expands, you'll be able to:

Understanding Voluntary Simplicity as a Form of Sustainable Consumption