Learn about Langston Hughes' short story 'Thank You Ma'am' in this lesson. We will discuss the setting, the characters, and what the dialogue reveals about both aspects of the story. After the lesson, take a brief quiz.
Create an account

'Thank You Ma'am' is a short story written by Langston Hughes and published in 1958. Though Hughes doesn't explicitly state what the setting of the story is, there are some clues that indicate the general place and time period. For one thing, the story was published in 1958, and the themes of Langston Hughes' work often revolve around the lives of African Americans in segregated America, so we can deduce that this story is probably set in the 1950s. Additionally, Roger wants to buy 'blue suede shoes,' which is probably a reference to an Elvis Presley song of the same title, popular in the 1950s. Based on some of the descriptions and language used, modern readers will get the sense that this story takes place in the past.

There are also several indicators that this story takes place in a city rather than a small town, and in the North rather than the South. Mrs. Luella Bates Washington Jones is employed in a beauty shop in a hotel that serves diverse female customers. It is unlikely that an African-American woman would be able to secure a job like this in the South in the 1950s or that a hotel like this would even exist in a more rural Southern area.

The more specific setting of the story is at night, first on the street where Roger tries to steal Mrs. Luella Bates Washington Jones's purse and subsequently in her room in a boarding house where she feeds Roger, tells him about her life, and gives him money to buy the shoes he wants. 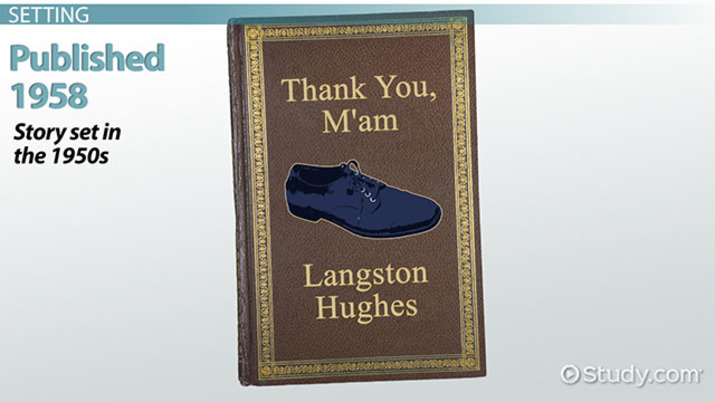 Coming up next: Bradbury's A Sound of Thunder: Summary, Theme & Analysis

There are only two characters in this story: a teenaged boy named Roger and Mrs. Luella Bates Washington Jones. Based on the topics and themes of Langston Hughes' work, we can infer that the characters are African American. Mrs. Luella Bates Washington Jones's long name matches her larger-than-life stature and personality. Roger, in sharp contrast, is timid and unsure of himself.

Even though Roger is stealing Mrs. Jones's purse at the beginning of the story, he is portrayed more as a desperate, misguided youth than as a bad person. Mrs. Jones is perceptive and recognizes right away that Roger does not have adult supervision or care, so she forgives him and sets about taking care of him, offering some guidance along the way.

Mrs. Luella Bates Washington Jones does the majority of the talking in this story; Roger is too embarrassed by his transgression, scared of what will happen to him, and overwhelmed by Jones's strong personality to say very much. His most important quote comes at the end of the story, when he can barely get out the words, 'Thank you, Ma'am.' Roger is self-conscious about the inadequacy of these words compared to what Jones has done for him.

Through Mrs. Jones's dialogue we learn that she is a strong-willed, decisive, and independent woman--a force to be reckoned with--but ultimately, very compassionate and wise. Right after Roger tries to steal her purse, she swiftly kicks him, shakes him by the shirt, and then decides to take him home for dinner, stating: 'When I get through with you, sir, you are going to remember Mrs. Luella Bates Washington Jones.'

She is observant, correctly guessing that Roger doesn't really have a home or parents to look after him, and she does not seem surprised or angry when she learns that he was trying to steal her purse so he could buy blue suede shoes instead of food: 'I were young once and I wanted things I could not get…I have done things, too, which I would not tell you, son--neither tell God, if he didn't already know.' This quote shows an incredible level of understanding and forgiveness.

After giving Roger dinner, Mrs. Jones further illustrates her generosity by giving him what he was trying to steal from her, but not without a lesson: 'Now, here, take this ten dollars and buy yourself some blue suede shoes. And next time, do not make the mistake of latching onto my pocketbook nor nobody else's--because shoes come by devilish like that will burn your feet.'

Mrs. Luella Bates Washington Jones undoubtedly teaches Roger a lesson he will never forget, not just through her wise words but also her generosity, compassion, and kindness.

'Thank You, Ma'am' is a story by Langston Hughes about a young boy named Roger and a woman named Mrs. Luella Bates Washington Jones. One night, on a street in what is probably a Northern American city in the 1950s, Roger tries to steal Mrs. Jones' purse. Instead of crying out, hurting the boy, or calling the police, Mrs. Jones takes the opportunity to help the desperate and misguided boy by feeding him and teaching him a life lesson. Roger is not a bad person at all. He is timid, desperate, and grateful for Mrs. Jones's generosity and understanding.

The Characters of Thank You, Ma'am

The act of viewing this lesson could prepare you to:

Personification in The Necklace

Bradbury's All Summer in a Day: Summary & Analysis

The Storyteller by Saki: Theme & Analysis

The Most Dangerous Game Setting