Language learning is a long process, and as it evolves, infants and toddlers go through different types of early speech. Learn about language development and some key types of speech, including child-directed or motherese, syncretic speech, holophrase, and telegraphic speech. Updated: 09/28/2021
Create an account

Danny is a psychologist whose daughter, Brooke, is almost a year-and-a-half old. She's lively and fun, and he loves playing with her. Not only that, but in the last six months or so, she's started talking, which is a lot of fun for Danny because he gets to hear what she's thinking.

For years, Danny has studied language development, which is the process whereby a child learns to speak in full, complete sentences. This doesn't happen overnight, of course, and there are many different types of early speech that a child can go through. Danny has seen several of them in Brooke. Let's look closer at some of the early types of speech: child-directed speech (or motherese), syncretic speech, holophrase, and telegraphic speech. 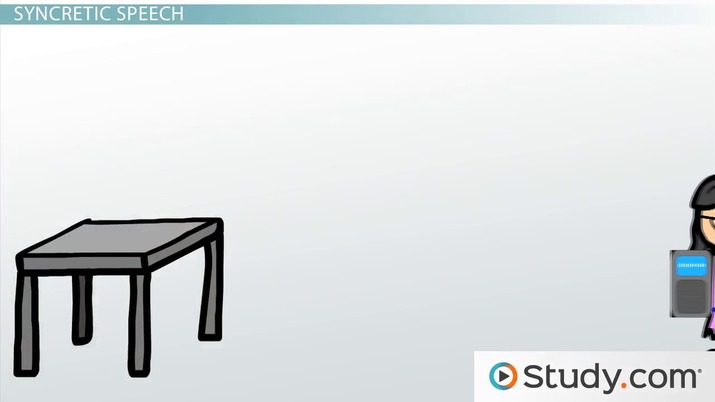 Coming up next: Jerome Kagan's Research on Temperament in Toddlers

Like other babies, Brooke's first experience with speech didn't have to do with speaking but with listening. When she was just a newborn, the people around Brooke (her mother, her father, aunts and uncles, and nurses and babysitters, and everyone else in her life) talked to her. But few of those people talked to her the same way that they talked to each other. Instead, they engaged in short, simple sentences meant to convey ideas in a way that even a baby could understand.

This 'baby talk' used to be called 'motherese' because it often comes from mothers, but psychologists, like Danny, call it child-directed speech. That term is more inclusive and recognizes that more than just mothers talk to babies. It's also descriptive of what it is: speech that is directed at the child.

Like all children, Brooke began by listening to the people around her talk. But if that's all Brooke ever did, she'd never be able to communicate. Language development is about learning to speak as much as it is about learning to understand what's being spoken. One of the earliest types of speech that children learn is called syncretic speech. This type of speech is egocentric; that is, it centers on the speaker's perspective and doesn't take others' views into account. The child makes no effort to tailor the speech so that it makes sense to the listener. This isn't just a kid being a brat; it's because at the point at which a child is learning to speak, they believe that everyone knows what they know.

For example, if Brooke sees her mom put her dad's cell phone in a drawer when her dad is not around, she won't understand that her dad doesn't know where the cell phone is. If Brooke knows where the cell phone is, she assumes that everyone does. When Danny comes looking for his cell phone, Brooke might say something unrelated, like, 'That's not there, and it's green because it's green.' This might sound like babbling to Danny, but it makes sense to Brooke. She's learned to speak, but hasn't yet learned to tailor her speech to make true communication possible.

One of the earliest types of speech that Brooke, like most kids, demonstrated was a special type of syncretic speech called holophrase. In holophrase, one word is meant to convey an entire idea. For example, when Brooke first started speaking, she would say the word 'Dada' to talk about Danny. But 'Dada' can mean much more than simply 'Dad.' Brooke would say it to mean things like 'Where's my daddy?' or 'Hi, Daddy,' or a host of other sentences related to Danny. That one word (Dada) was meant to convey whatever entire idea that Brooke was trying to communicate.

It's not surprising that Brooke and other children go to holophrase as one of the first types of speech. When first learning to speak, a child's vocabulary is limited, and their experience with communication is limited. To them, saying 'Dada' might be the only way they can ask where their father is. They might not have the vocabulary or the experience to be able to construct a sentence like, 'Where's my daddy?'

Luckily, though, Brooke and other kids don't stay in the holophrase phase of speaking forever. Eventually, they begin to string together words to make sentences, which allow them to communicate better. But even that is a process that starts slowly. Telegraphic speech involves short sentences, often no more than two or maybe three words. It's named telegraphic speech because back when people sent telegrams to each other, they were charged by the word. As a result, telegram senders learned to communicate with as few words as possible.

One example of telegraphic speech happened when Brooke heard a loud noise one day. She cried, and Danny picked her up to comfort her. He asked what was wrong, and Brooke said, 'Me scared.' In two words, Brooke had conveyed all of what she was feeling and thinking in that moment. As she gets older and more experienced in speech, her sentences will become longer and more complex, until she's speaking like an adult would.

Language development is the process whereby a child learns how to speak. There are many types of speech that occur during different phases of language development, including child-directed speech, which is also called motherese or baby talk; syncretic speech, including holophrase; and telegraphic speech.

Studying this video lesson could motivate you to:

What is Pragmatics? Examples and Rules