When we talk about culture, a few things come immediately to mind: food, language, and art. Art is one of the definitive elements of culture and, as such, has played a major role in world history. If we want to understand Italy, we can look at Italian art. If we want to understand Canada, we can look at Canadian art. But what if we want to understand a broader region, like Latin America? Latin America is a loose term that generally refers to the Spanish or Portuguese nations of Central America, South America, and the Caribbean. Although this wide area is filled with dozens of distinct and unique peoples, there are some unifying trends that not only appear throughout several cultures, but also in their arts as well. 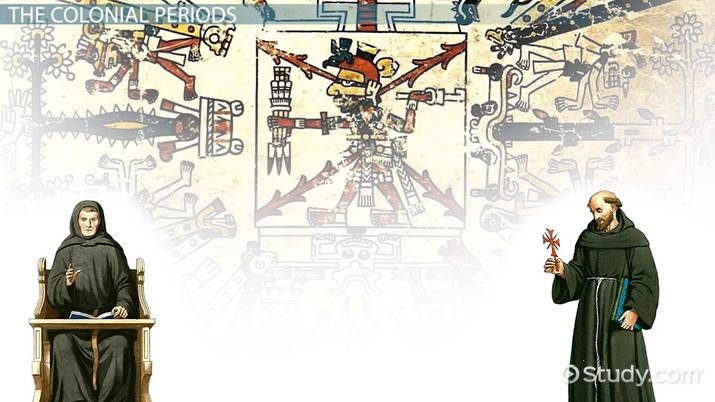 Try it now
Back
Coming up next: Native American Art History

Latin America is a huge region, and one that's not always clearly definable. So, if we're going to look at the entire region as a whole, we need ways to unify it. One obvious way is through shared historical experiences. So, let's start by looking at Latin America before the arrival of Europeans, back before this region was either Latin or American.

Prior to 1492, the Americas were filled with hundreds of ethno-linguistic groups. This staggering amount of diversity was largely thanks to the geographic and ecological diversity of the continents, but there were some common cultural patterns that emerged across regions. Caribbean societies often existed through warfare and by managing the complex trade routes connecting the islands to mainland Mexico and North America. Their arts were often functional and indicative of status, reflecting their exposure to many different cultures around the Gulf of Mexico. In the continent, Mesoamerican societies were often agricultural, creating large-scale architecture and monolithic carvings from stone. From Mesoamerica into South America, dozens of nomadic cultures thrived throughout the jungles, creating portable or low-impact arts that often had social and religious function. Along the Andes of South America, sedentary civilizations worked stone and metal, as well as developed highly complex weaving cultures with a major focus on textile arts.

The pre-colonial cultures of Latin America were infinitely complex and diverse. However, in the 15th century, Spanish conquerors started to colonize the region, and were soon followed by the Portuguese, French, and English empires. The process of colonization was traumatic for most indigenous cultures of Latin America, characterized by massive losses of life to disease and abuse, the forced abdication of cultural practices, and obligatory assimilation of European customs.

In terms of art, there are two major traits we see in this era. First is the recording of indigenous arts by Catholic monks, under the assumption that these practices would soon be lost forever. In Mexico in particular, friars used Aztec and Mayan artists to record indigenous histories and cultural practices. Secondly, European art was introduced and used to supposedly reaffirm European superiority. We see this most in the genre of casta paintings, or portraits of stereotyped members of colonial society defined by ratios of African, Amerindian, and European ancestry.

While the colonial period began in the 15th century, the world was changing by the 19th century. The colonists had begun developing new identities, separate from their imperial homelands. As Latin American colonial societies started seeing themselves as unique, their arts changed to reflect emerging national identities. This practice really took off after those colonists declared and achieved their independence.

For many people in Latin America, their unique national identity came from the fact that they had both European and Amerindian ancestry, and several Amerindian motifs reappeared in 19th and 20th century art as part of the national culture. A great example of this comes from the muralist movement of Mexico, where artists like Diego Rivera painted large-scale murals that combined modernist, European styles with traditional Aztec wall painting to create a new, national art form. Images from Aztec history and culture were very common motifs in muralistic arts, as well as other forms of Mexican national culture. This is just one example, but it represents a very common trend across Latin America.

Throughout the 20th century, many Latin American nations had similar experiences with political instability, the rise and fall of dictators, and weakened economies. The result has been a large push in arts across the region to re-examine their histories, especially in terms of underrepresented populations. Amerindian groups and artists seek to reclaim their cultural heritage, African populations are seeking larger representation in national arts, and female artists are demanding greater attention for their work.

All in all, Latin American nations today are still using art as they have been for centuries. Nations like Mexico put lots of effort into commissioning art that's in keeping with the most modern international styles. Mexico has a long history of using art to demand recognition as a globally important nation. Guatemala and Nicaragua are using their arts to reconnect to their Amerindian heritage and continue exploring their modern identity. Peru's arts elevate the role of the Inca in establishing ancient civilizations while seeking a unified national consciousness. Across the region, arts in Latin America are largely defined by this perpetual quest to define themselves, their complicated histories, and their roles in a world that doesn't always understand them.

Latin America is a broad region, loosely defined as the Spanish and Portuguese speaking nations of Central America, South America, and the Caribbean. While this area is home to a diverse range of cultures, there have been some unifying trends across their histories that impacted their arts.

In the pre-colonial era, many Amerindian cultures were connected through trade, but existed as distinct ethnic and cultural groups. During the colonization of the 15th and 16th centuries, European arts and cultures were forced into the region, generally at the loss of Amerindian customs. The 19th century was characterized by the development of national identities and independence movements, and many Latin American nations tried to reconcile their Amerindian and European heritages. Instability in the 20th century has led to a greater focus on underrepresented populations, such as ethnically African groups. The arts are still a major priority across most of Latin America, as artistic expression and identity remain perpetually connected.

Try it now
Back
Create an account
Latin American Art History
Start today. Try it now
Art, Music, and Architecture Around the World