One of the six simple machines is the lever. Levers allow a relatively smaller force to move a heavier object. In this lesson, we will investigate the law of the lever and work some examples involving levers.
Create an account

Uses of the Lever

Have you ever been on a seesaw or opened a paint can's lid? If so, you were using a lever, which is a bar or other rigid object that has a point to pivot around. The pivot point is called a fulcrum.

Let's say you're on a seesaw with your friend who weighs a lot more than you and you want the seesaw to be balanced. You could position yourself at a certain distance from the fulcrum so your lighter bodyweight counters your friend's bodyweight, allowing the seesaw to be in equilibrium. This means there's no rotation. Let's see how the math works when dealing with a lever. 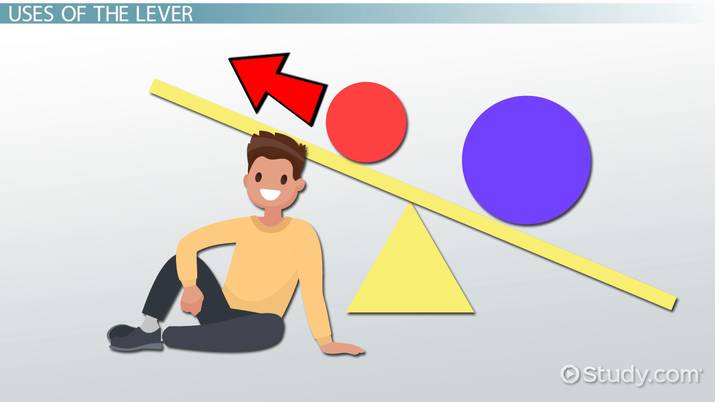 Coming up next: Critical Thinking and Logic in Mathematics

The Law of the Lever

This means we need a way to adjust the amount of torque based on the angle at which the force is applied to the lever. The sine trigonometric function has a maximum value at 90° and a minimum value at 0°. We can rewrite the cross product of force and distance from the lever arm including the sine function. This is how the cross product is evaluated. The equation for the magnitude of torques in the law of levers:

We'll deal with situations where the angle between the force and the lever arm is 90° so we can remove the sine functions because the sin of 90° is 1. This gives us this next equation:

Now, we can work some practice problems using the law of levers. Let's get to it!

Imagine Sal weighs 150 pounds, and his friend Joe weighs 100 pounds. Sal sits 3 feet from the fulcrum on a seesaw. How far does Joe need to sit on the other side of the fulcrum so the seesaw is in equilibrium?

The first step in solving this problem is to draw a diagram, which we'll call Diagram 1.

Now we can use this next equation to determine how far Joe needs to sit from the fulcrum so there's no rotation of the board they're sitting on.

Now we can divide both sides by 100lbs to get the distance Joe needs to sit from the fulcrum to put the seesaw in equilibrium. We'll call this Step 3.

So if Joe sits anywhere besides 4.5 feet from the fulcrum, the board they're sitting on will rotate.

Let's do another example.

The lid on a paint can is wedged into the can. It would require 300 pounds of force to overcome the friction between the lid and the can. The screwdriver you have is 12 inches long. The fulcrum is 11 inches away from where you apply a downward force to pry open the lid, and the lid is 0.25 inches from the fulcrum. What minimum force would you need to apply to the screwdriver to open the can?

Again, we'll start the solution with a diagram.

Now we can use this next equation to determine the force you need to apply perpendicularly to the lever arm to open the lid.

As we can see:

Dividing both sides by 11 inches, we get the force you have to apply perpendicularly to the screwdriver. As we can see, it equals approximately 6.8lbs.

Roughly 6.8 pounds isn't too bad compared to the 300 pounds you would have to apply to the lid to pull it off without the lever!

Let's take a couple of moments to review what we've learned.

A lever is a rigid bar that has a point about which it can pivot. The point around which a lever pivots is called a fulcrum.

The law of the lever equates torques on opposite sides of the fulcrum. If the angle between the force and lever arm is 90°, the sine function can be removed from the equation.

So now you should be able to apply this knowledge next time you're trying to figure out how much force you need to apply to unscrew that lid that's gotten a bit stuck.

Mechanical Advantage of the Wheel & Axle

Charlemagne's Holy Roman Empire and the Divine Right to Rule