Copyright
Lesson Transcript
Instructor: Elena Cox
Inertia refers to the property of matter that enables it to remain motionless or move in a straight line unless impacted by an external force. Further explore the definition, formula and effects of the Laws of Inertia, including Newton's First Law of Motion. Updated: 09/22/2021
Create an account

Place a book on your desk. Does the book move? Unless you move the book, it will remain where you put it without moving.

The book and the spacecraft have inertia. Inertia is the property of an object that resists changes in its motion. Because of inertia, an object at rest tends to stay at rest. An object in motion tends to keep moving at a constant speed in a straight line. 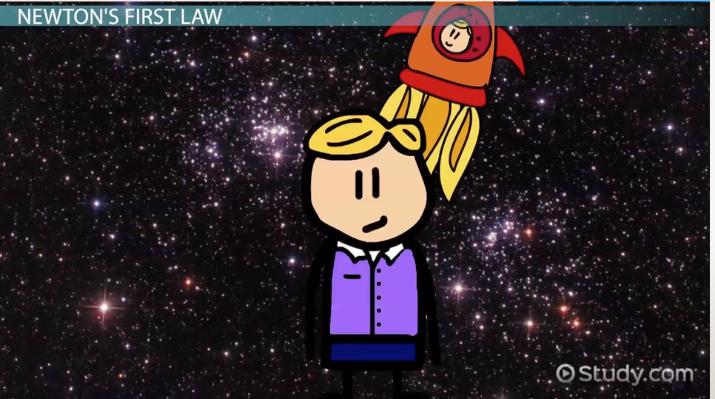 Coming up next: Scalar Quantity in Physics: Definition & Examples

Newton's First Law of Motion explains how inertia affects moving and non-moving objects. Newton's first law states that an object will remain at rest or move at a constant speed in a straight line unless it is acted on by an unbalanced force. Inertia comes from mass. Objects with more mass have more inertia.

According to Newton's first law, an unbalanced force is needed to move the book on your desk. You could supply the force by pushing the book.

An unbalanced force is needed to change the speed or direction of the spacecraft. This force could be supplied by the spacecraft's engines.

Because of inertia, an object at rest will remain at rest until something causes it to move. Likewise, a moving object continues to move at the same speed and in the same direction unless something acts on it to change its speed or direction.

In baseball, inertia tends to keep a player running in a straight line. So, base runners have to 'round' the bases instead of making sharp turns.

Cars and planes with more inertia take more force to accelerate. Since inertia is related to mass, in order to reduce inertia you must reduce mass. The mass of a car or plane is a trade-off between inertia and the strength of materials of the car or plane. You want strong materials, but you don't want them so heavy that it takes too much energy (fuel) just to get the car or plane moving!

Seat belts could be called 'anti-inertia' belts. A car tends to keep moving in a straight line, even if the driver's foot is not on the gas pedal. Everyone inside the car also has inertia. They are moving at the same speed as the car.

Suppose you are riding in a car. The driver is forced to step on brakes suddenly. Inertia keeps you moving forward at the same speed as the car was moving. You will keep moving until something stops you. This might be the car's steering wheel, dashboard or windshield. You might be hurt if you hit these parts of the car, unless you are wearing a seat belt. A seat belt keeps you from moving forward when the car stops suddenly. Seat belts can prevent serious injuries. You should always remember to 'buckle up' when you get into a car.

If you suddenly apply the brakes to your rapidly moving bicycle, you have to brace yourself to keep from falling forward. If you are on a ride at an amusement park in which you suddenly accelerate forward, your body seems to push back against the seat.

In both cases you have demonstrated Newton's first law, the Law of Inertia. The Principle or Law of Inertia states: a mass at rest tends to remain at rest; a mass moving at a constant velocity tends to keep moving at that velocity, unless acted upon by an outside force. Thus, Newton's first law involves the problem of changing velocity, or of acceleration. For instance, suppose you are standing still in a 'bumper car' at the amusement park and someone drives another car into yours.

You will be accelerated from zero kilometers per hour to some value greater than zero. The force of collision is able to move your car. This unbalanced force produces acceleration. Newton's First Law of Motion states that no force is needed to keep something moving in a straight line at a constant speed. A force is needed to stop that motion or to change it in some way. This is a description of inertia, which is a property of all things.

You are probably used to thinking that moving objects eventually slow down by themselves. But this slowing down is the result of forces such as friction. Without such forces, an object set moving would move forever.

The car and the red block in this pair of images can serve as another example of the Law of Inertia.

Is inertia a force? No. Forces are results of interactions between two objects; they are not properties of single objects, so inertia cannot be a force. Remember that because velocity includes both the speed and direction of motion, a net force is required to change either the speed or the direction of motion. If the net force is zero, Newton's first law means the object will continue with the same speed and direction.

Mass is a measure of inertia because an object with a large mass is harder to start in motion and harder to stop than an object with a smaller mass. This is because the object with the large mass has greater inertia. For example, imagine that you are going to push a grocery cart that has only one potato in it. No problem, right? But suppose the grocery cart is filled with potatoes. Now the total mass - and the inertia - of the cart full of potatoes is much greater. It will be harder to get the cart moving and harder to stop it once it is moving.

Inertia is the tendency of an object to remain at rest or in motion. Newton's First Law of Motion states that an object will remain at rest or move at a constant speed in a straight line unless it is acted on by an unbalanced force. The effects of inertia can be felt every day.

Once you have reviewed the lesson at length, you could realize these goals:

Distinguishing Between Inertia and Mass

State of Motion and Velocity