Learn about the atmosphere, the gases surrounding the planet, and how it is divided into layers. Explore the troposphere, mesosphere, stratosphere, thermosphere, and exosphere of the planet. Discover what differentiates these layers. Updated: 12/06/2021
Create an account

The atmosphere is the layer of gas that surrounds the earth, including the air that you breathe. The atmosphere might be invisible, but there's a lot going on up there! It even has different layers, starting on the ground and stretching all the way up into space. Let's explore each layer on a journey to space. 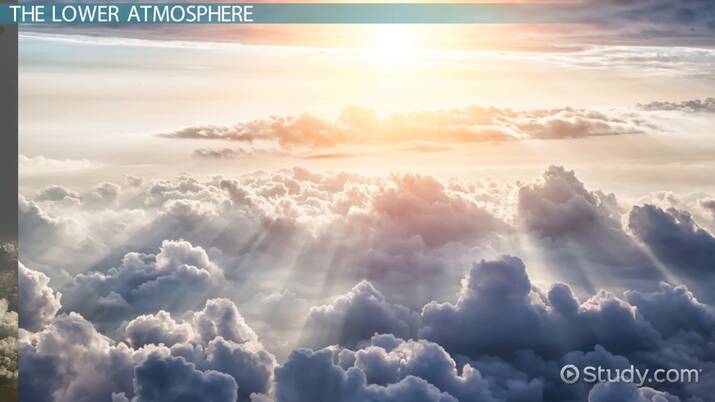 Try it now
Back
Coming up next: Weather Fronts Lesson for Kids

Imagine you're an astronaut taking off in a space shuttle. When you're on the ground walking to your ship, you're breathing in air from the lowest layer of the atmosphere. This layer is called the troposphere. Now hop in the space shuttle and get ready for your trip to space.

The troposphere stretches up 4 to 12 miles from the earth's surface. In the troposphere, the higher up you get, the colder the temperature gets.

The next layer up is the mesosphere. The mesosphere is around 22 miles thick. Watch out for meteors as your space shuttle flies through this layer! Whenever a meteor shower hits the earth, the mesosphere is where the meteors burn up and turn into shooting stars. In the mesosphere, the temperature switches around again and starts getting colder as you get higher up.

The top of the mesosphere is around 53 miles above the ground. If you drove in a car on a highway, it would take you almost an hour to drive 53 miles.

As your space shuttle keeps heading up into the upper atmosphere, there are two more layers left: the thermosphere and the exosphere.

The thermosphere is about 322 miles thick. That would take around five and a half hours to drive on a highway. In the thermosphere, the temperature gets higher as you go higher up.

Finally, the exosphere is the top layer of the atmosphere. Up here, the air is very thin. The upper edge of the exosphere stretches up into space. Once you've flown up through the exosphere, you're in space!

Okay, let's review what we've learned. The atmosphere is the circle of gas that surrounds planet Earth, and it has five layers.

From the ground up, they are the:

Layers of the Atmosphere Lesson for Kids
Related Study Materials