Tony taught Business and Aeronautics courses for eight years; he holds a Master's degree in Management and is completing a PhD in Organizational Psychology

Substitutes are areas of power transferred away from a leader, resulting in the increased performance of subordinates. Learn about the leader substitutes models to see how exchanging or decreasing leader-authority can sometimes improve results through self-managed work teams. Updated: 12/22/2021
Create an account

There are as many definitions for the term ''leadership'' as there are types of leaders. Some of the things that these definitions have in common is that they all involve being in a position of influence over another person. The concept also deals with providing vision, motivation, resources, encouragement, and guidance to others within your team.

Question: What if the team does not need any of the things that leaders typically provide?

There are situations where team members already have the characteristics we just mentioned, which greatly reduces what the leader is able to do for the team. As an example, let's say that Scott is a parent and he wants his child to complete her chores. Scott knows that, typically, he is able to get his daughter to do things when he offers her a piece of candy in exchange. In this case, however, it is the day after Halloween and she already has a bag of candy in her room. The power of Scott's leadership influence in that regard has been removed because the reward that was normally used is not effective. 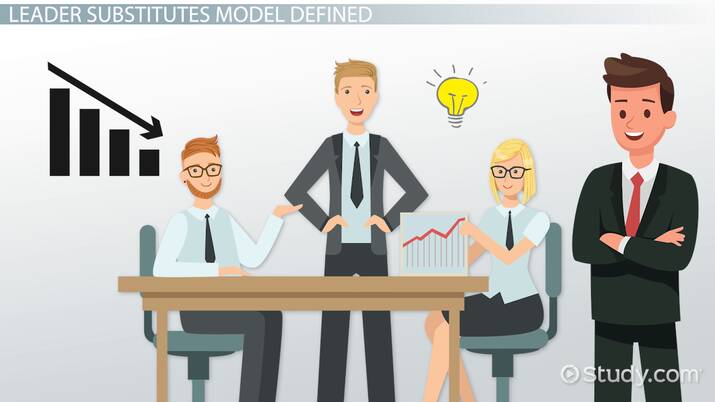 Coming up next: The Transformational Leader

Substitutes are characteristics that take away from the leader's power, while helping the group members increase their performance. One common example of a substitute for leadership is a team that works very well together. Scott is also a supervisor in a marketing firm, and he has put together a team of people who have all worked at the company for many years. In this case, the team members have good communication and can get their tasks done by themselves. As such, Scott has less influence because they do not need a leader to come in and tell them what to do or how to do it. This is especially true when the task itself is easy.

Another thing that reduces Scott's influence on the team comes in the form of neutralizers. Neutralizers take away from the leader's control but don't increase the team's performance. Some examples of neutralizers are distance between the leader and the subordinates and experience of the members. In this case, Scott is able to reward his employees with an ''Employee of the Month'' award; however, team members Jill and Andrew do not really care if they earn the award or not. In this case, the fact that the employees do not strive to achieve the reward takes away from Scott's leadership, but it does not necessarily increase or decrease Jill's or Andrew's performance.

In some instances, a situation may include both substitutes and neutralizers at the same time. Andrew just finished college and received his degree in marketing. He is very excited to be working for this company and likes the work he does each day. Andrew is what we call intrinsically motivated, which means that he isn't motivated by external factors like money or support, but is motivated just by the love of the job alone. A leader trying to influence Andrew is like someone trying to cheer you up when you are already happy.

So far we've discussed characteristics of the team members themselves, but there are also ways that a company can design its organization to reduce the need for leadership. One way to do that is to create self-managed work teams. These teams do not have any official leader or supervisor but are simply given tasks that they must complete. They'll work out within their group who will do what parts and get the projects completed on their own.

Self-managed work teams can be a very good idea but are not appropriate in every situation. The corporate culture of the organization must include employees that are motivated, knowledgeable, trained, and ready to make their own decisions. In companies where these conditions exist, self-managed teams are more efficient because they save the costs involved with paying a supervisor's salary, and they are typically able to get the projects done in the most efficient way because they are the ones doing the work.

Okay, let's review. In this lesson, we discussed the definition of the leader substitutes model and how it applied to Scott, a parent and supervisor in a marketing company. We saw that even if Scott is a great leader, his abilities can be countered by situations or characteristics of those he leads.

Self-managed work teams are one way that companies are making use of the leader substitutes model by having employees put into teams without a leader. Their knowledge, skills, and abilities take the place of daily supervision and save the company money, while giving the team members a sense of independence in how they perform their work, since they're intrinsically motivated, which means they aren't motivated by external factors like money or support.

The Attribution Theory of Leadership

How to Disagree with the Group: Examples of Idiosyncrasy Credits

Building Constructive Relationships with Your Employees