Some of the Romans' most significant contributions to the world were in technology and science. Explore Roman advances in roads, aqueducts, and concrete, and how they took these innovations to the countries they conquered. Updated: 10/26/2021
Create an account

Do you like fresh water? Me too! Do you like roads? Me too! Concrete? Me too! Wow, we have so much in common - us and the ancient Romans. The ancient Romans were an Italian civilization between roughly 509 BC and 476 AD. Roman engineers were always looking for new ways to improve the lives of Roman citizens and many of their innovations left long-lasting legacies for technology and science. Some of the most influential were the aqueduct, Roman roads, and concrete. 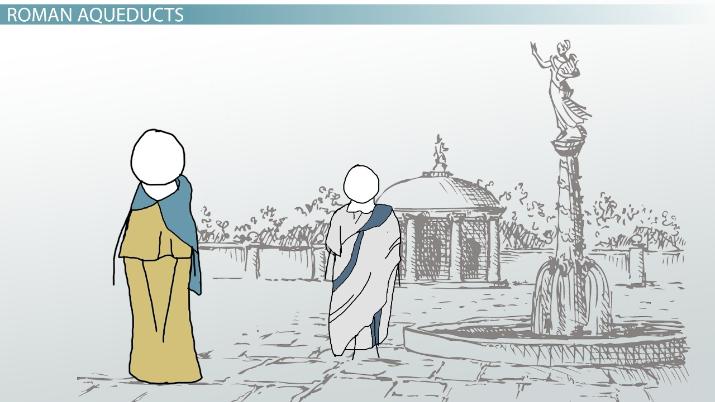 Try it now
Back
Coming up next: Legacies of Roman Literature, Language & Law

When you have a big city with lots of people, those people need fresh water. People are just funny that way. The city of Rome only had a few fresh water springs, so the engineers built aqueducts, pipes that use the natural pull of gravity to bring water from springs in the mountains to areas without fresh water. Water from the aqueducts went to public fountains for drinking or to public baths.

The first Roman aqueduct was built in 312 BC for the city of Rome. Called the Aqua Appia, it ran ten miles out of town and brought 75,500 gallons of fresh water into the city per day. By the fall of Rome in 476 AD, the city had 480 miles of aqueducts bringing in 300 million gallons of water every single day. The Romans also used aqueducts to bring water to their colonies across Europe and the Mediterranean, from Britain to Africa. The longest aqueduct of the Roman Empire was the Valens Aqueduct, which ran over 600 miles to Constantinople.

As you can see, aqueducts were pretty important to the Romans, but they weren't easy to build. Since gravity pulls the water, the entire aqueduct had to maintain a consistent slope over miles. If the slope of the aqueduct changed at any point, the water would not flow correctly. This meant that sometimes the pipes would run underground through hills, then be elevated on bridges over valleys. On aqueducts that were too long for a single slope, large tanks were used like reservoirs that filled with water and then started a new slope from the top of the tank. Roman aqueducts brought fresh water to literally millions of people.

Another long-lasting Roman technology was the road. Have you heard the phrase, 'All roads lead to Rome?' The Romans built 29 major highways from the city of Rome, which connected to almost 250,000 miles of road across the empire. Approximately 50,000 miles of these were stone-paved.

Okay, so nothing sounds too impressive about roads. The Romans had roads, big deal, so what? Actually, there's a lot more to roads than you might think. Roads connected the entire empire, allowing for people, goods, food, and troops to move around much more easily. Most of these areas never had formal roads before the Romans. To make sure that Roman troops and trade items could get anywhere they needed to, most Roman roads were a standardized width for a typical Roman cart. These roads were built to resist rain, freezing, and flooding, and most were made in a perfectly straight line between the two cities, which is the most direct route.

Roman roads were so technologically advanced that after the fall of Rome, nobody was able to create more efficient roads until the 19th century. Some original Roman roads are still in use, almost 2,000 years later, because they were so well built. Roman roads changed how people were able to move in Europe and opened up the continent to new styles of trade, military, and communication.

Obviously, the Romans built a lot of things. They loved building, and they were really good. But, what did they use for all of these projects? Stones were too heavy and expensive to transport all over Europe, and wood was not always strong or resistant enough. So, the Romans mixed quicklime and volcanic ash with water and small stones to create a magical concoction called concrete.

Just like roads, this innovation may not sound very flashy, but imagine what concrete meant for the ancient world. For the first time, builders had a material they could prepare on site and pour into any shape they wanted. It was strong, relatively light, and incredibly cheap. Concrete is resistant to weather and holds its shape. It is a very effective building material, which is why we still use it all the time today.

The Romans used concrete to pave roads, to build aqueducts, and to create several new architectural features such as the dome. Domes are very useful because they are lighter than a flat roof, but were hard to build before concrete because the dome has to support its own weight. With concrete, the Romans used the dome to cover huge buildings, allowing for more spacious interiors. The Roman temple called the Pantheon is still the largest pure concrete dome in the world at 142 feet wide. The legacy of concrete is not hard to see. We use it all of the time. In fact, concrete is still the most commonly used man-made building material in the world.

The engineers of the ancient Italian civilization called the Romans left a pretty amazing legacy in technology and science. Roman aqueducts used miles of pipes to bring fresh water to millions of people across the Roman Empire. These pipes had to maintain a steady slope over hills and valleys to ensure a consistent flow of water. Roman roads connected the entire Roman Empire and let people, armies, information, and trade items move with ease. Roman concrete was a very efficient building material that could be poured into shape, was very strong, and very cheap. With concrete, the Romans could build practically anything they wanted, and they did.

Throughout their civilization, which lasted from roughly 509 BC to 476 AD, the Romans built thousands of structures, roads, and aqueducts. These technological innovations left a major legacy and have impacted our construction technology to this day.

After this lesson is finished, you should be able to name and describe three of Rome's major contributions to technology and science.

Life in Early Modern Europe: History & Analysis | How was Life in 1500s Europe?

Life in Early Modern Europe: History & Analysis | How was Life in 1500s Europe?